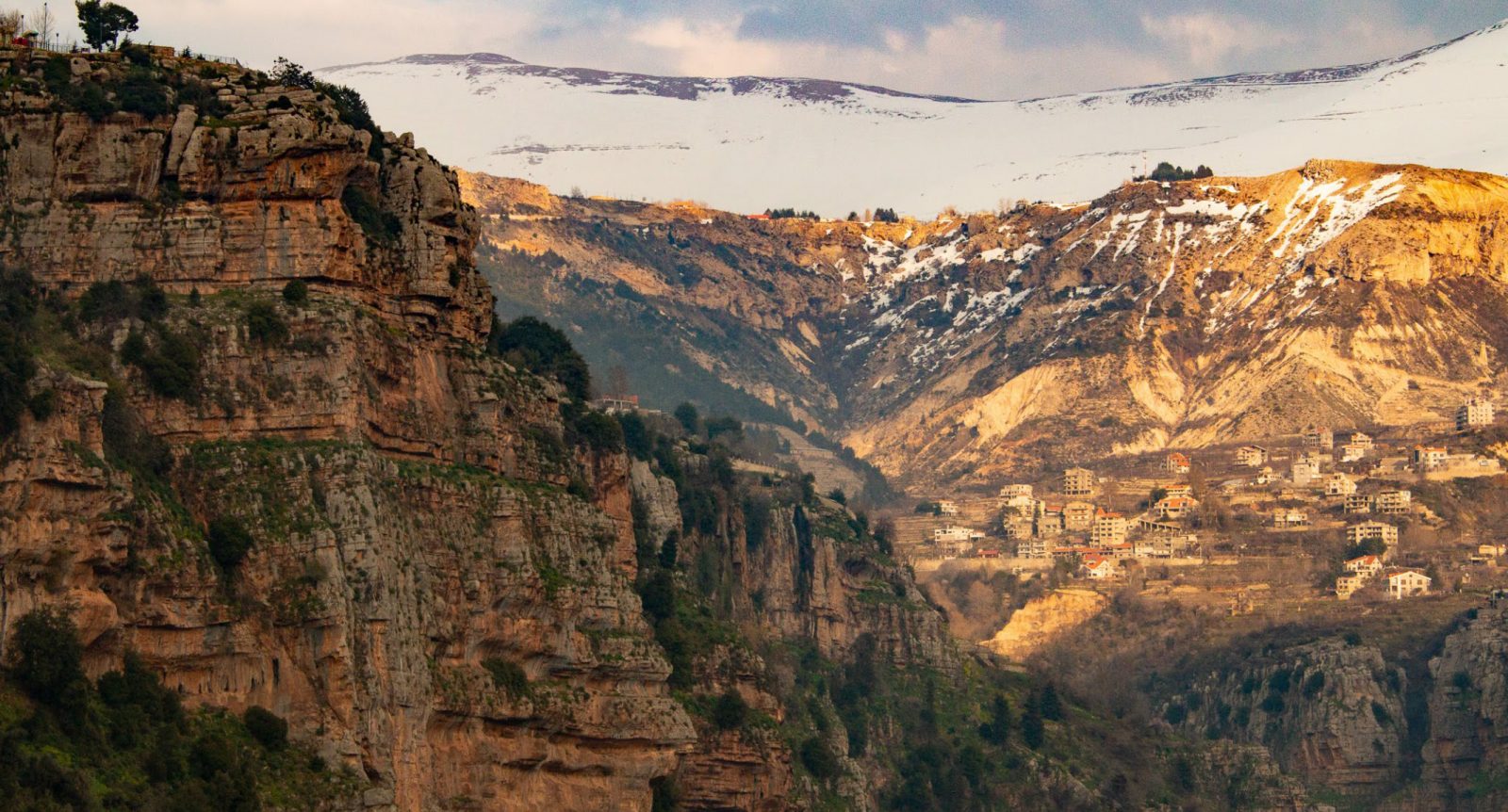 A WALK ON THE WILD SIDE OF LEBANON

snow, gorges and hospitality on the Lebanon Mountain Trail

The Middle East might not be the first place that comes to mind when you think of snow-capped mountains, but there’s one Middle Eastern nation where mountains rise up straight from the Mediterranean Sea to altitudes of over 3000 metres. That nation is Lebanon. A tiny country, about the size of Belgium, wedged between Syria, Israel and the Mediterranean Sea. More than 80% of its landmass is considered mountainous. During most winters the high peaks receive a dump of snow, making it a paradise for outdoor enthusiasts.

The highest peak of the country is Qornet as Sawda (3088m). Essentially a huge plateau that drops down steeply on all sides. In its shadow runs an exhilarating long-distance hiking trail called the Lebanon Mountain Trail, or LMT. It crosses the entire country through the Lebanese mountains from the Syrian border in the north to the Israeli border in the south. The LMT is one of the best kept outdoor adventure secrets in the Middle East, receiving less than a hundred thru-hikers a year. Chris, an Australian mining engineer and myself are exploring the northern part of the trail. The five-day trek will take us around the western base of Qornet as Sawda through lush forested hills sides and deep secluded gorges. 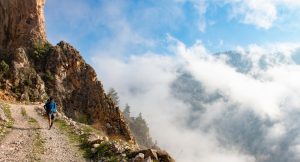 We start our trek in the quaint little town of Fnaideq in the Akkar district. It’s literally a breath of fresh air, coming from metropolitan Beirut. We’re only a few kilometres from the Syrian border as the crow flies, separated by the northern tip of the Mont Liban Range. Akkar is known for its vast mixed forests of pine, cedar and juniper trees and the LMT cuts right through the heart of it. We are prepared to be self-sufficient for this trek, carrying heavy packs of around 25kg on our backs. The snowfall this winter season has been exceptional and in addition we strap a pair of snow shoes on our packs, just in case.

For the first night we plan to camp in the spectacular Wadi Hakl el Kherbeh gorge, close to the pretty mountain village of Qemammine. We cruise through bleak fields and orchards that are still in winter mode. Some path sections are still covered with snow, slowing down our progress. It makes us wonder what lies ahead, as our trek passes much higher ground further south. As humid air starts to rise up from the Mediterranean our surroundings are quickly enveloped in clouds. Unlike all of the other 25 LMT sections, this part of the trail is not waymarked and we struggle to stay on route. The only available topographical map was produced in 2008 and a lot of route changes have been made since. Dirt tracks get tarmacked, illegally, quarries block the way and there is a continuous push to build second homes and hotels in remote areas. Recently the Lebanon Mountain Trail Association have launched an awareness campaign under the slogan Hike it, Protect it, to try and put a halt on these developments in pristine mountain areas in Lebanon. 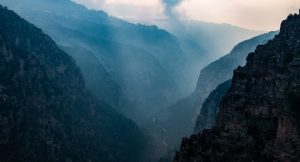 A steep drop takes us to the entry of the gorge. We notice a small cabin with smoke puffing out of its chimney. An older man beckons us for a cup of tea and we eagerly accept. These are the only times when I truly enjoy sugar loaded shots of tea. It’s a brilliant spot and the owner Ibrahim invites us to stay in his mountain home with his family. How can we say no? It’s a single room building with a wood burner in the middle of the room. Apart from keeping us warm it also serves as a stove. We are treated to a hearty meal and hit the sack before 8, happy with the luxury of a roof over our heads and sharing our passion for the Lebanese mountains with our warm, generous hosts.

The next morning we’re well underway as the first sun rays hit the gorge. A skinny path through the dense pine forest takes us to the sleepy hamlet of Qemmamine, tucked away in one of the remotest places in Lebanon. Unfortunately, we have no time to spend any time here as we are unsure how long this stretch is going to be. The climb out of the gorge is steep and hard-going with our heavy loads. From the top, we can see the entire coastline far into Syrian territory. The traverse towards our next camp is a wonderful wilderness hike through an ancient juniper forest. And it’s entirely empty. Due to the extended winter, most shepherds haven’t come up with their livestock yet. Quicker than expected we find a scenic camp spot next to a spring. Clean drinking water is often hard to find and we decide to pitch our tent on one of the terraced fields. As the evening falls we see two 4X4s approaching. We’re surprised and a little uneased, given the unusual time of the day.

A bunch of older men jump out of the cars, shake our hands and start calling relatives in Australia to talk with Chris. The inevitable shishas and BBQs soon follow and they insist we party with them, eating delicious, juicy lamb kebabs and locally sourced watercress salad that supposedly has the same attributes as Viagra. When they leave, we realise that we still haven’t used any of food we brought with us so far. 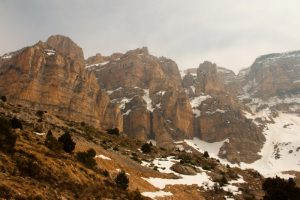 The third day of our trek leads us to some of the biggest cliffs in Lebanon. Today we see first-hand the intrusion of human beings on Lebanon’s natural environment. Many buildings have not been finished and several new roads are randomly bulldozed through the landscape. In contrast, the untouched towering limestone cliffs resemble the Italian Dolomites, perhaps less high but in the Lebanese context out of the ordinary. The final stretch to our camp near Bqaa Sefrine is a pleasant surprise. The irrigation channel on the map has been filled with concrete for recreational purposes, allowing us to stroll casually high above the valley floor. At the end of the channel we find a perfect flat spot for our camp.

We hit the trail early as this will be the longest and toughest section of the trek. Initially it’s easy hiking through pretty agricultural fields. After lunch, we face a 600 metre climb up towards the Horsh Ehden Nature Reserve, one of the last remaining ancient cedar forests in Lebanon. The LMT runs along the north facing and densely forested slopes and we expect there to be snow. There is no way of knowing how much snow there is or the condition of the cover. From the highest point of the trek we peer into Horsh Ehden and our jaws drop in disbelief. Our route is completely covered in a white blanket and with the relatively high temperatures we expect it to be very slushy. We plough our snow shoes through knee deep snow and decide to cut across the valley and climb up the north facing side further downstream. It looks steep but feasible. The wild, pathless descent to the river goes fairly quickly. While we try to find a way up from the riverbed we’re obstructed by deep snow and thick thorny bushes. It’s a proper scramble up wet rock and tree roots. As the crow flies we’re 200 metres from the trail, but there’s still lots of steep terrain to tackle. 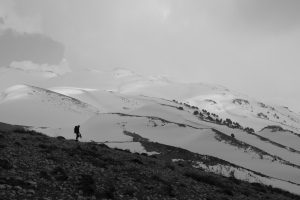 It takes us a couple of hours to reach more level ground. Daylight is fading and we haven’t found the trail yet. For some reason, the arrow on the GPS is all over the place, making it hard to establish where the trail exactly is. Chris and I navigate through the woods trying to find the LMT while avoiding dangerous terrain. It’s been warm the past few days and this has affected the snow pack underneath tree roots and rocks, creating a minefield of deep, invisible gaps. It’s already dark when Chris asks me to help him out. His snow shoe is jammed in one of the holes underneath a tree root. I dig him out and we anticipate that today is going to be a late one.

Finally, four hours after we started the descent into the cedar forest, we recognise a trail and see the distinct white and purple LMT marker. The going is still hard. The trail disappears regularly underneath the diagonal, slushy snow pack and we are absolutely knackered by the time we reach the reserve’s gate, 14 hours after we set off on today’s section. Luckily a pick-up truck meets us on the dirt track out and the driver generously offers a ride to a cabin where a cold beer and a hot shower awaits us. 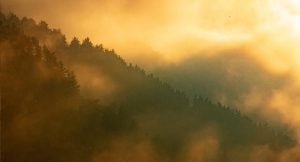 The final day from the town of Ehden to Bcharre is long, but the weather is fantastic. A superb descent past waterfalls, an ocean of wild flowers and centuries-old monasteries takes us into one of the most spectacular gorges in the Middle East, the Qadisha Valley. It’s is a UNESCO World Heritage Site for both its natural beauty and its cultural and religious heritage. Limestone cliffs, 500 metres high on either side, rise up from the valley floor. Hidden underneath these cliffs are numerous monasteries and dwellings where hermits still live in solitude. The final climb to Bcharre allows us to see the Qadisha Valley from above, surrounded by snow-capped mountains. This might well be the best view in the Middle East, a fitting reward after an epic adventure.

This itinerary was developed as a bespoke expedition with Secret Compass, to chat with one of our travel experts and plan your own unique adventure, get in touch today.