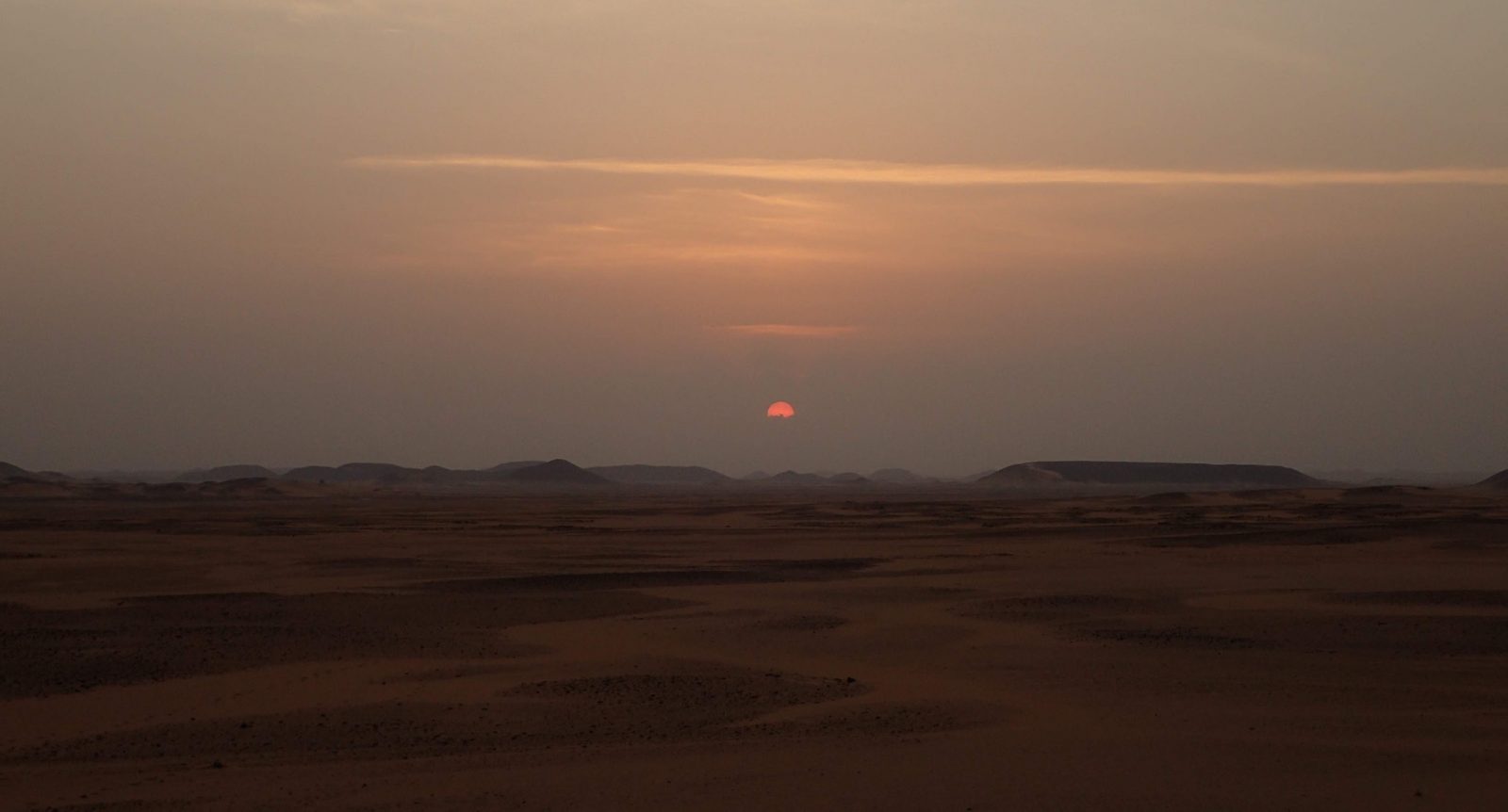 ARE YOU CRAZY? IT’S DANGEROUS!

into the deserts in the face of uncertainty

What? The Sinai? Huh, Khartoum? Are you crazy? Why, don’t go there, it’s dangerous!

Invariably this is how people react when you tell them you’re off to the Sinai in Egypt or the Bayuda in Sudan to do a desert crossing. It’s the almost generic fear many people harbour about Africa. All Western media ever talks about, are the wars and ethnic conflicts, variously mismanaged or escalated by local governments and often abetted by foreign interference or, more succinctly, by the international arms trade. Protecting local elites, international interests in natural resource extraction and global positioning bypass the local populations who often continue to live in a state of material poverty and compromised ambitions. 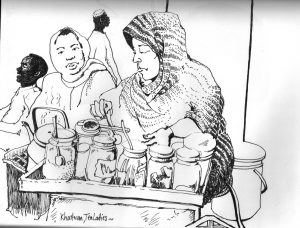 ‘It’s not the people, it’s their government,’ goes the saying. And so it is with the good, friendly, welcoming and un-jaded Egyptians and Sudanese we met. While we were in Sudan, daily civilian protest demonstrations took place in the cities against their military ruler and as I write this, history is unfolding. After a thirty-year rule, in April 2019 Omar al-Bashir has been removed but nobody knows the upshot of what’s next.

The Sinai, too, is known for violence around the northern parts, far removed from the crossing we did in the southern mountains of the peninsula. And, shortly after our group left Egypt, a plane was shot down near Sharm-el-Sheikh airport by an Isis-affiliated organisation. Stuff happens, yes, but these incidents have nothing to do with us tourists visiting the most remote desert areas in these countries. By traveling here, we help the local population earn an income that’s otherwise hard to come by, and Secret Compass has elaborate plans in place should evacuation be necessary. They have ample experience with expeditions in ‘unorthodox’ destinations and their guides are tops in their field. 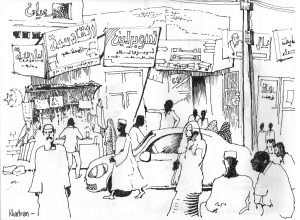 Clearly, the kinds of people who participate in these trips are not exactly the ‘cruise, luxury lodge and spa’ crowd – they tend to be tough and resilient, generally taking potential eventualities in stride. I’m a solo traveler, mostly, but in order to experience these kinds of destinations and activities, I will make an exception and gladly join a Secret Compass group.

Despite everything the distinguished culture critic Edward Said wrote about Orientalism, colonial attitudes and western misperceptions of Islam, to this Dutch girl there’s something alluringly ‘19th Century Romantic’ about walking in the Nubian desert accompanied by Bedouin ‘men in robes’ and their camels. I jump right in by wearing a long robe myself: it’s cool, comfortable and colourful, while being modest at the same time, and that’s important in these places. Perhaps because of this, I’ve been made into the Secret Compass’ ‘supermodel’ on the Sinai expedition web page.

On our way, we see our Muslim friends dash off from time to time to say their prayers in private, on their knees in the sand. Do they do this to acknowledge the good life we’re living here in the wild, to bless the goat who just gave his life to feed us dinner? Or to beg Allah to rescue us from this silly idea of crossing the hot desert on foot, when there’s Toyota 4x4s readily available? 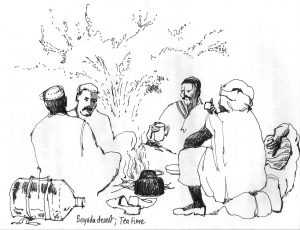 A walking pace allows for quiet introspection but also for close observation of small details in a landscape like the Bayuda which at times is featureless and flat. The oppressive 40-degree heat, which even the locals said was much too hot for the time of year (25 degrees more likely), was confirmed by the camels as they walk steady gait with their eyes on the horizon, occasionally eyes closed in perfect silent meditation. The details of a desert’s surface are rich, with all kinds of tracks clearly visible in the sand, from snake-slithers to hoof prints to bird feet, lizards and foxes. There’s plenty of life, but you hardly ever see it. And wherever a spot of moist lingers, a thorny plant will take advantage and grow its seed as fast as possible or grow long shoots along the surface, in the hope of another drop of water.

The skies! But of course! Deserts are famous for their millions of stars, the full moon nowhere as bright. ‘Someone switch off the light please, I’m trying to sleep!’ goes a voice from somewhere out there in the sandy night. The Sinai has a variety of features: narrow canyons, multi-coloured sediment layers, steep rock faces and meandering wadis interspersed with human settlements, their cultivated gardens and orchards, as well as the famous St. Catherines monastery and Moses’ abode, Mt. Sinai itself.

It’s a complicated landscape that demands a fair amount of climbing from the group. This is your one and only chance to beg Moses to issue us with more commandments, because the existing ones are all broken and the modern world is in disarray. In the Bayuda you meet semi-nomadic sheep and camel herders with their families camping out in straw huts under sparse acacia trees. However, to add more culture and history at the end of the trek, we visited some of the little known sacred sites and pyramids along the Nile, built during the Kushitic Empire (784 BC – 350 AD). 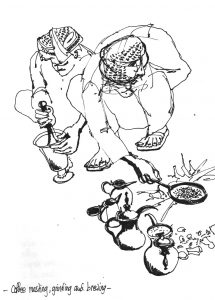 Living at this pace for two weeks in these exquisite surroundings, in the company of kind local people, you can’t help but recognise feeling sky-high despite physical exhaustion. It’s hard to explain to people who’ve never put themselves in these extreme circumstances. There’s more to this existence than mere physical exercise, bringing the right gear, paying your moneys and having an exotic adventure. That’s why I deliberately choose expeditions with a cultural dimension on top of the natural beauty and physical exertion.

Msallam, our local guide in the Sinai, was an absolute treasure with his mild, philosophical nature and his willingness to laugh, answer questions and share his culture with us. Secret Compass’ low-gear, minimalistic approach to the Sinai and, to a somewhat lesser extent the Bayuda trek, adds to the romance of ‘doing as the Bedouins do.’ In the Bayuda, we had two Toyota pick-up trucks following us along at a distance, which felt a bit like cheating to be honest, but proved necessary because of the lack of drinking water along the way. The Sinai has plenty of good wells for animals and people to draw on and beside that, the mountainous terrain is altogether inaccessible to cars. Carrying forty nineteen-litre barrels of water for a total of 22 people over ten days, on top of tents, luggage, kitchen gear and food is no sinecure of course, so our accompanying twenty camels in the Sudan were blissfully saved from this extra brutal burden. The presence of cars here had another welcome function: one afternoon sitting comfortably in the car was best for a speedy recovery from occasional stomach problems, overheating, or blisters, juicy and ripe-as-plums. 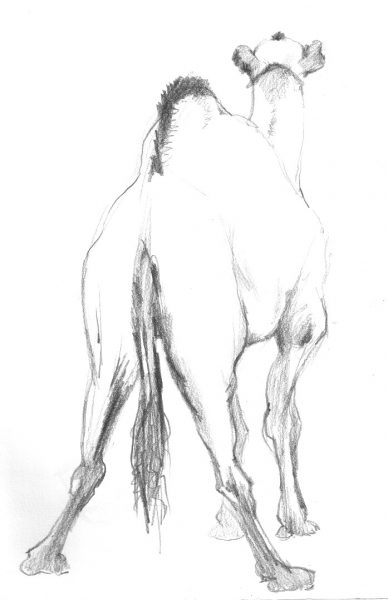 How about the Bedouin guys themselves? Tough as nails. One of them, Nasser, climbed the highest mountain in the Sinai on bare feet, robes and all, jumping the rocks like an Olympic athlete. Another, Bellah, our older chief cameleer and way-finder in the Bayuda – and a well-known ‘big man’ in the local camel trade – stoically steered the herd of us onwards, knowing not a word of English. Yet another, Nizzar, walked the 280 kilometres across the Bayuda in flipflops without complaining. Riding a camel, to him, was a far worse scenario. He knew something we didn’t when we started.

It looks like the gods did a trial run coming up with an animal design suitable for the desert, and arrived at this impossible beast of burden that roars, bites, gurgles and kicks while being handled, despite appearing perfectly lovable with its pretty face, elegant neck, smiling lips and long lashes. To watch its ‘landing gear,’ the calloused spots that allow him to fold his legs under in three moves while sitting down, is to marvel at the engineering feat that’s a camel. It’s just that darned hump and awkward, lilting gait which means riding it hurts.

Thank you all at Secret Compass for your hard work and dedication, covering all bases. Thank you to our superb guides, David Lucas in the Sinai and Luca Alfatti in Bayuda, for your unstinting attention to our wellbeing, your professionalism and obvious love for the desert and its people.

Dave, you made the best smoky baba ganoush I’ve ever tasted, by holding the eggplant over the open fire in the sand, and Luca, being Italian, could you please teach our Sudanese crew how to make edible spaghetti? That would earn this trek even more points. 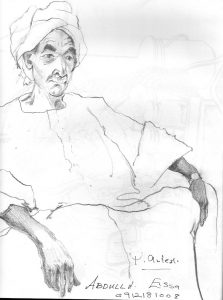