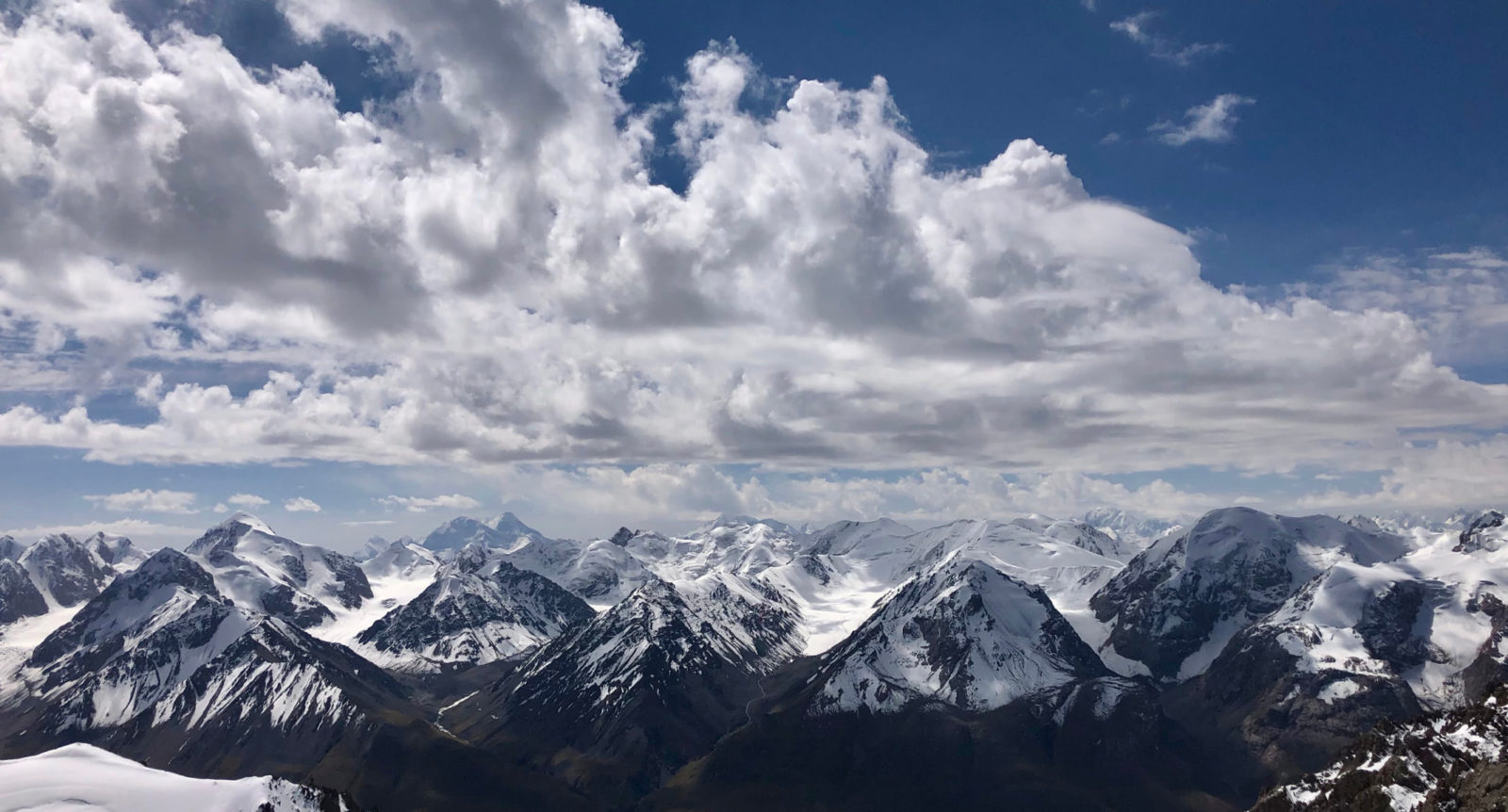 In Chinese, Tien Shan translates as mountains of heaven or celestial mountains. Crossing the borders of Kazakhstan, Kyrgyzstan and Northwest China, the Tien Shan is one of the major systems of mountain ranges in Central Asia, forming part of the Himalayan orogenic belt. Its southern reaches connect with the Pamir mountains in Tajikistan. In the north east, the range touches the Altai of western Mongolia.

Kyrgyzstan, despite being dwarfed by its neighbours, accounts for the bulk of the Central Tien Shan range with more than 80% of its land mass covered by mountains. As such although, the country is just four-fifths the size of the UK with a population noticeably fewer than London Kyrgyzstan is dubbed by some as The Switzerland of Central Asia. Its density of peaks combined with such a sparse population making it the perfect destination for exploring swathes of untouched wilderness and summiting unclimbed mountains.

In Autumn 2019, Chris Shirley – of The Hiatus Project and Tales of Adventure – led a Secret Compass expedition to explore and climb several unclimbed mountains of the Central Tien Shan deep within the wilderness of eastern Kyrgyzstan. This is the story of that expedition. 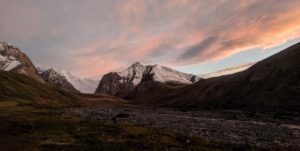 I fly to Bishkek and transit to a guesthouse in the capital and await the remaining team members, who like myself will be arriving generally via Moscow with transit times between 12 and 15 hours. We’ve still got a few days before we start heading to the mountains so there’s ample opportunity to check out the sights, culture and beauty of the capital.

The team is comprised of range of different mountaineering and expedition experience; what they do all have in common though is bags of enthusiasm for hitting a first ascent. Knowing that no one else has ever summited a mountain that you’re scaling is a huge draw.

We drive to a lovely family-run guesthouse near to Issy Kul lake, the second largest saline lake after the Caspian Sea, and spend a comfortable night getting to know each other. Spying a well-stocked gift shop and knowing we’ll be coming back to the same place stops me from buying anything unnecessary. 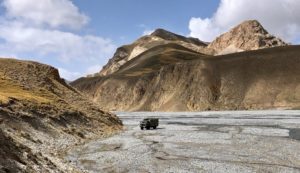 Transit to the Heavenly Mountains

That night, we transfer the gear to a large 4×4 type vehicle and over dinner, get excited by the prospect of the next stage where we’ll be joined by a sizeable support crew comprising of porters, cooks, guides and drivers. The route takes us high into the Tien Shan mountain range as well as off-road, so vehicle packing has to be well-planned for everyone’s safety and a comfortable journey. Our vehicle is an old soviet Army truck that is built for hard terrain however keeps us guessing when it suffers some running issues.

We make the journey in good time and transition to driving off road. The area is home to a sparse population of semi-nomadic families and farmers who graze cattle on the area.

After hours of bumpy off-road driving, we arrive at our pre-planned valley around 3600m and start setting up our base camp location. The local crew are an expert squad and get to work like an F1 team.

Basing ourselves in a valley entrance, we start by surveying the local area to better understand our surroundings to familiarise the team with the plan for the days ahead and what it feels like to carry weighted backpacks again. From a safety perspective, myself and local International Field Mountain Guide Association-qualified (IFMGA) mountain guide Misha dynamically assess the arena and update our team with slightly amended contingency plans. 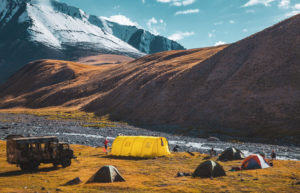 Our first mountain is a beautiful snow-covered peak with a relatively low level of technicality. To get close enough, we set up an advance base camp (ABC) nearer to the mountain so we can start early enough.

We’re a few hundred metres higher than our normal base camp at ABC so we talk about the early symptoms of acute mountain sickness (AMS) and check everyone’s oxygen saturation levels. We’ve planned to sleep 2 people per tent, positioning everyone close enough that they can communicate in an emergency but also so that we’re not all in the same place in case something happens, a rockfall for example. 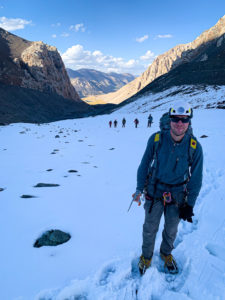 Trudging through ankle deep snow is tiring at first as we set off. Knowing we’re walking towards an unclaimed peak is a huge morale boost for everyone in the team though, and we’re driving up at a fast rate.

We hit the summit of 4789m and are ecstatic as we bag the first peak. We return to ABC and over a hot dinner, chat ecstatically over what we’d call the mountain if we were lucky enough to name it. After much discussion, a bottle of Russian vodka is produced by the local team and we toast the end of the first day. The name of the vodka – ‘Kochevnik’ (кочевник in Russian) –

meaning ‘Bedouin’ or ‘nomad’, we decide is the perfect name for the peak and so ‘Mount Kochevnik’ gains its colloquial name amongst the team. 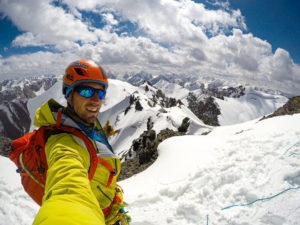 Our next mountain is further away meaning a longer walk to its base. We wake up whilst it’s still dark, setting off in the cold, over rolling hills. We chat like excited school kids despite the early start and the biting cold.

The mountain is rocky for most of the early ascent which means we can move nice and fast – gaining height at a steady pace. We reach the snow line and the route becomes a little more technical than the day before, as we traverse around and over rocks.

After a few more hours, we arrive at the summit at 4446m to take in the incredible views. The peak has the most stunning panorama overlooking a number of other mountains. It’s an absolute joy to behold.

Rest Day at the High-Altitude Lakes

The team is in need of a rest day, so instead of unnecessarily milling around base camp we look for interesting things on the map and find a number of lakes around 3900m. To make the day count towards our recovery – we pack our swimming gear, wet weather gear and a picnic and set-off.

After a few hours of walking across the rugged terrain, surrounded by incredible snow-covered peaks we reach the lakes. We set up a small camp from the chilly wind and tuck into a delicious packed lunch.

The water is bracingly cold, unsurprisingly. We take it in turns to get in so that there is support in case anyone has a bad reaction to the cold water. 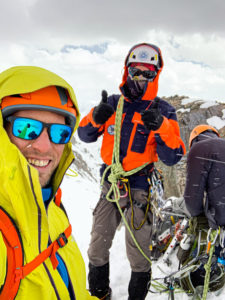 With two summits already in the bag, we’re a more confident, practiced and conditioned team and our final peak is the most challenging. We spend a night back in ABC and plan to be up and on the mountain before sunrise.

The team comes to the main gear tent before 5am so we can have breakfast together and do any final checks for our gear and each other.

We bag our final peak – the highest yet at 4842m – and celebrate with photos of the incredible sights. The team is jubilant at having fitted three peaks into such a short time. We high five and congratulate each other on a job well done. More summit photos are taken and after radioing down to base camp, we set about the slow trundle back down for hot food and further celebration. 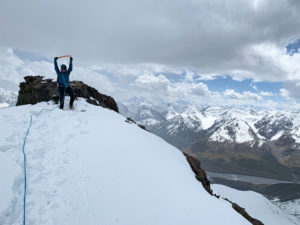 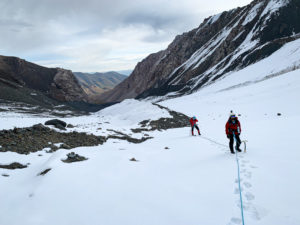 With three peaks under our belts and an incredible time in this wilderness, we pack up and drive out of the region. Our 4×4 vehicle is fully packed and the whole team is practically falling asleep in the warmth. As we drive past the mountains and the lakes we’ve visited, we share details of our favourite moments from the week and we look forward to a comfortable bed and visiting the tourist sites at Issy Kul lake.

After thanking and saying goodbye to our support team, we head back to Bishkek and have final team dinner at a pizza restaurant and toast everyone’s return back home – with a flurry of summits and a first for the entire team.