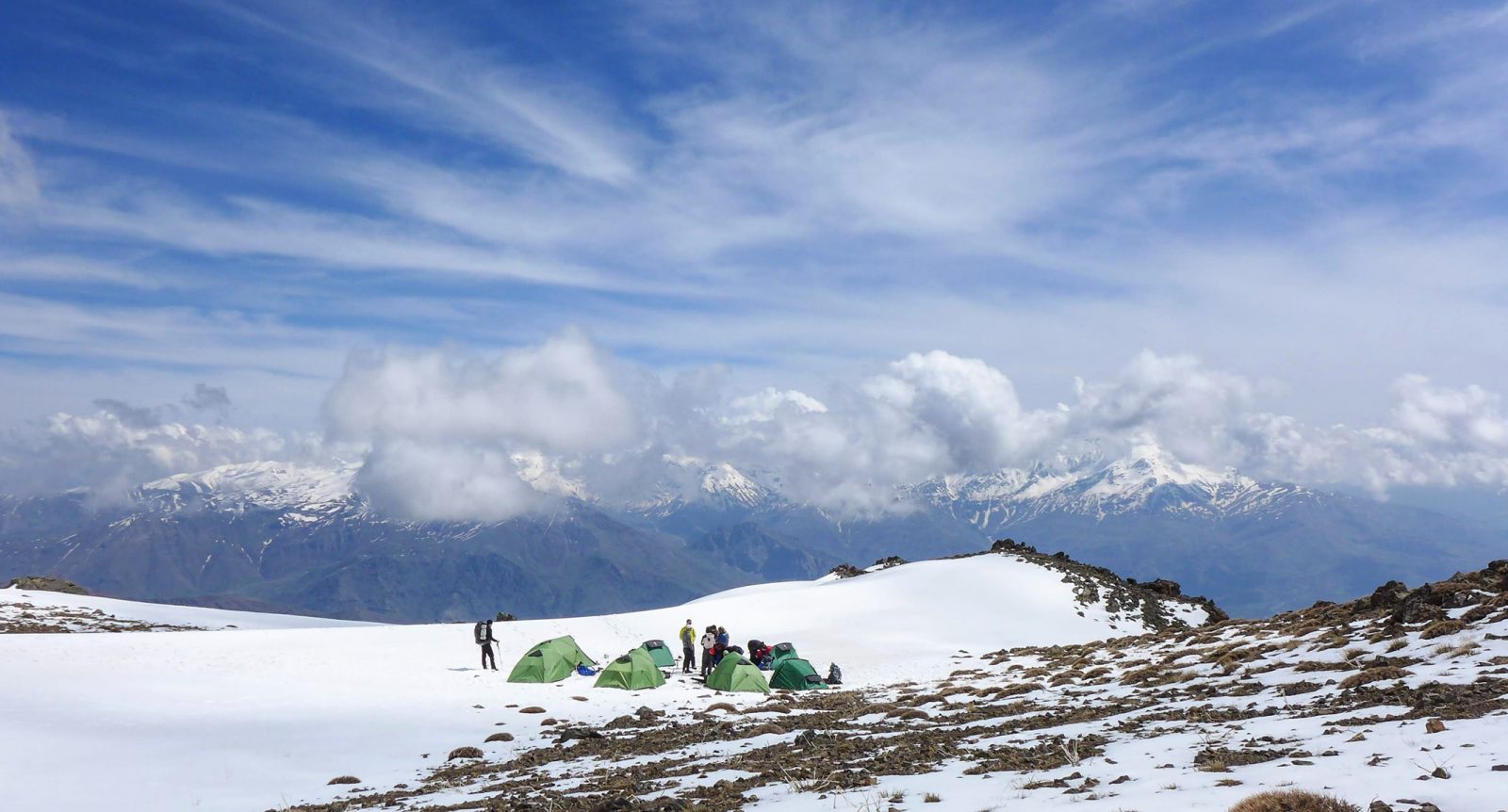 Considering where I was going, I was surprised how easy it was to get to. From London, a short flight to Vienna plus another connection and I’d landed in Erbil, the capital of the semi-autonomous Kurdistan Region in northern Iraq. Officially governed by the Kurdistan Regional Government (KRG), it’s one of the oldest inhabited citadels in the world. The Kurdish people, an ethnic minority, originate from the mountainous region of the Northern Middle East and currently number 25-35 million people, occupying an area spanning the borders of Turkey, Iraq, Syria, Iran and Armenia. They’ve negotiated and fought for their own state since the defeat of the Ottoman Empire but so far this has been to no avail.

I was part of an expedition to climb Mount Halgurd – at 3,607m the highest peak wholly in Iraq – in the Zagros mountains of Kurdistan. We had a briefing that first evening from our guides Dave and Phil in our hotel in Erbil – showing us a map, they outlined the overall planned itinerary, warning of course, it would be subject to change. There were 11 others in the group, from the UK, the Netherlands, US, Russia, and Australia, and we shared our travel stories over kebabs in a local restaurant that night. With Dave an ex-army Engineer and Phil having guided on several high altitude peaks, I felt in safe hands.

After a hearty breakfast in the hotel the following morning, we packed our bags and boarded our minibus towards Choman, the foot of the Zagros mountains. Passing through several military checkpoints, we stopped by the Shanidar Cave – an archaeological site located on Bradost Mountain. The remains of ten Neanderthals had been found within the cave as well as two later proto-Neolithic cemeteries. We had a look around the cave and were soon on our way again, reaching the town of Choman by about 8pm. There we met the family of our local guide Omer, including his animated elderly father Mohammed. Their house was basic with a couple of large rooms downstairs lined with cushions and rugs. A couple of the rooms upstairs were still being built alongside a large flat roof deck. We ate some kebabs, rice, and bread seated on cushions and slept in our sleeping bags on the downstairs floor of their house. 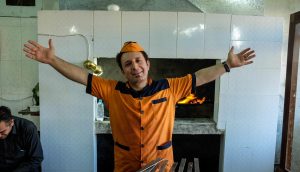 The next morning I set off with Remco and Jan, two Dutch guys from our group, to buy supplies for the trip from Choman. The small town didn’t take long to explore, from the local market to the butchers shop with its cows’ heads laid bare on a wooden table, blood spilling onto the street outside.

We left the town in two trucks towards the mountains later that afternoon. Once we reached the snow line though, with the vans ill equipped for the terrain, we trekked the rest of the way into camp.

It was a steep trek uphill into the Zagros mountains with around 20kg in our rucksacks with our personal kit, tents, and food so it was slow going for the next couple of hours but eventually we reached a snowy plateau where we set up our basecamp. We put up our tents and cooked our dehydrated meals over small gas stoves.

It was tough waking up the next morning, but at 4am we boiled some water for porridge before packing our day-bags to set off at 5.15am sharp. The walk up snowy slopes in our crampons was sustained but required nothing technical. It was beautiful seeing the snow glisten beneath us as the sun came up over the mountain range.

We continued traversing up slopes, kicking in our crampons, until we came over the crest of the mountain to reach the summit at about 9am. We all celebrated, taking out flags and hugging each other. A couple of hours later we were back down at camp to spend what was the left of the day relaxing. 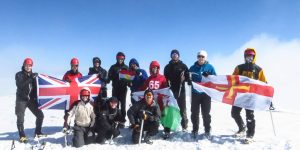 At 6.30am the next morning we woke for breakfast and packed up our kit to leave a couple of hours later. The walk was pleasant, along dirt paths surrounded by fields and hills and a scattering of small stone houses.

Result of decades of conflict, the mountainous region along the Kurdistan border with Iran is covered with thousands of landmines laid during the 1980-88 Iran-Iraq War, mostly by the Iraqi regime who planted these to hinder the advance of Iranian troops. We soon met a couple of men dressed head to toe in white protective outfits, part of a team who had been clearing this area for some time. They were keen to warn us that whatever we did, we were not to step off the path. 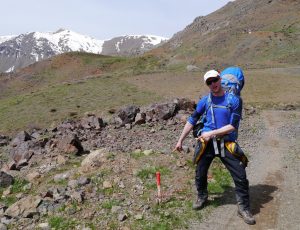 Eventually, we reached a flat area surrounded by low rock walls whereby local shepherds would typically rest at night. Here we relaxed for the rest of the afternoon, playing cards and making our dehydrated meals using boiled water from a nearby stream. The next day there was a debate around what to do next – some of the group was keen to go for another summit, but myself and a few others were keen to descend back to Choman. In the end five of us set off with our bags and a couple of tents. It was a lovely walk with long traverses down dirt trails with beautiful views over the surrounding valleys.

Just as we were starting to flag and wondered if we’d make it back down before dark a truck rumbled past. The men in the front were Dr Kamal, who’d lived in Austria the past 35 years and was currently lecturing in Erbil, and his brother. They happily let us jump in the back of the pick-up and drove us back to Omer’s family house in Choman. We were reunited with Remco and the family including Omer, Mohammed, two nephews and two children. They were so welcoming. Although we couldn’t communicate much they poured copious amounts of tea, played card games, and provided us with chicken and rice for dinner. 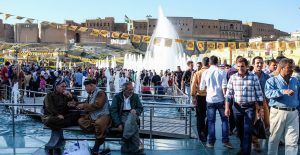 We wandered around town the next morning – buying ice-creams, watching children playing football, and Jan even got a shave. It was hard sometimes to think I was in a country synonymous with war. It was only when I walked past a checkpoint that reminded me of where I was.

It was a long drive the next day back to Erbil and I was sad to say goodbye to Omer, Mohammed, and his family. En route we visited a small museum on the history of Iraqi Kurdistan where we heard about the region’s struggle for independence.

Just a couple of months after we returned home, ISIL and aligned forces began a major offensive in Northern Iraq against the Iraqi government. The US then began a campaign of airstrikes, in part to protect Kurdish areas such as Erbil from the militants. Back home in London, I thought of the people I’d met in Kurdistan. Thankfully through social media I knew they were safe but it was heartbreaking to think they could be caught up in the attacks. To think just a few weeks earlier we had been drinking tea in the streets, feeling completely relaxed. Knowing now there were airstrikes seemed unreal and it brought home how easily this part of the world can become unstable. What this expedition taught me though is to no longer associate Iraq purely with war and violence. I want to remember the kind and welcoming family I met in Choman, the children laughing and playing games in the streets, and the beautiful mountains of the Zagros range. Hopefully one day I’ll be back to explore the region further.

Want to discover Kurdistan for yourself? Find the details of our next Mount Halgurd expedition here.