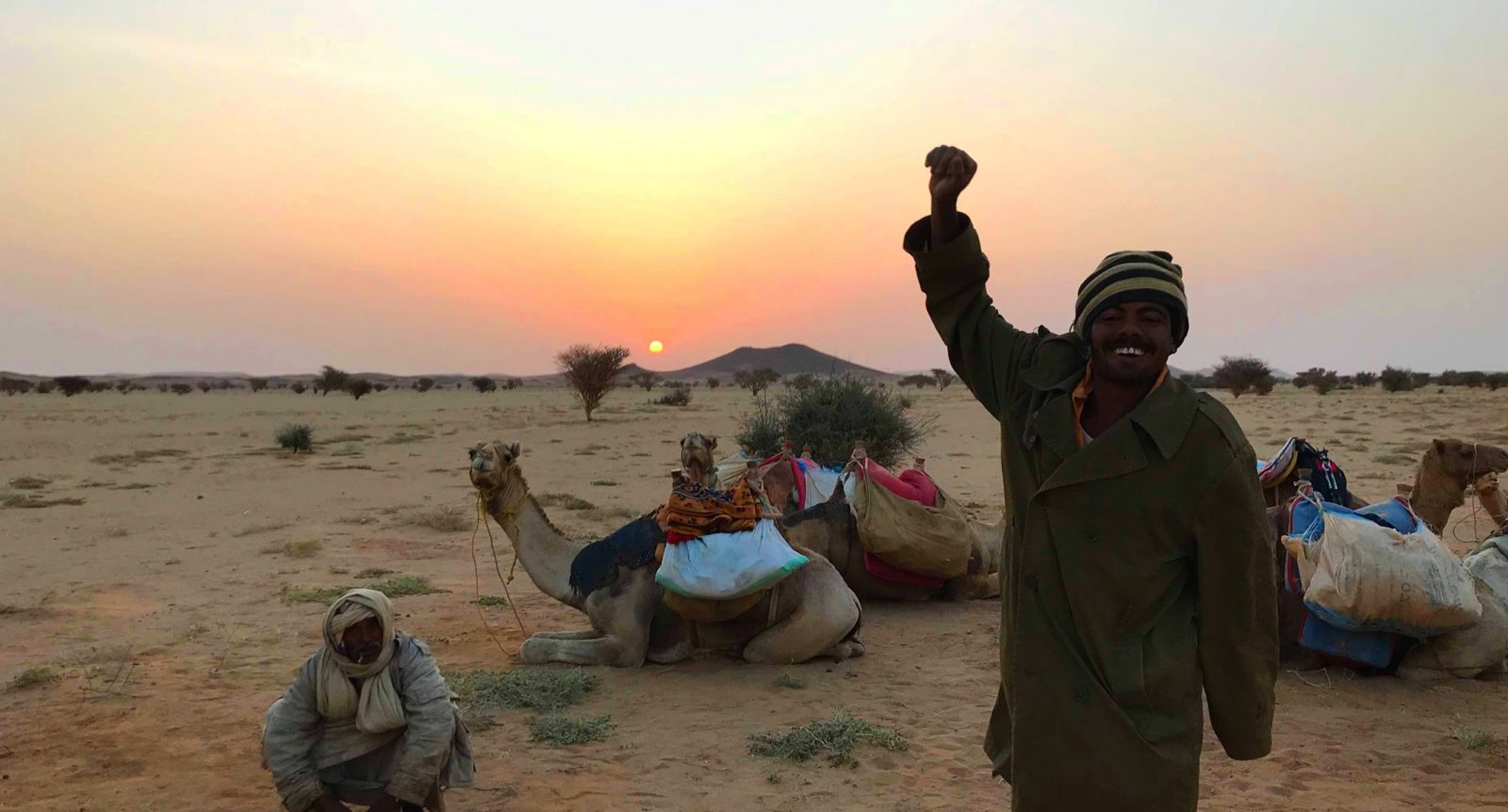 a nine day traverse of the iconic bend in the Nile

“Hello. Where are you from?” A smiling face and a young guy in a football shirt takes my hand.

“Hello, I am so pleased to meet you,” another young guy in a long grey cotton robe smiles out a slightly formal greeting. “I learn English listening to the BBC, I like Shakespeare and Charles Dickens.”

“This is my friend,” pipes up football shirt guy. Now a group of four or five have gathered, all smiling and all of them friendly. They press in closer as the noise starts to grow. 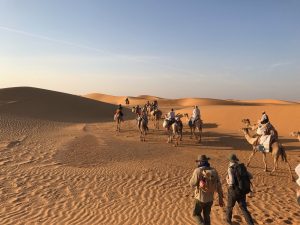 The two chanting “Allah, Allah,” have now been joined by several more. They start to circle and someone bangs a drum. The outer circle of spectators is pushed back to create more space as more start to join the chanting. A sound system is being set up and there is a growing feeling of anticipation.

The sun is setting behind the minarets of the mosque and the air is hot, dry and dusty. A man in some sort of crazy fringed green-man type outfit tries a couple of experimental twirls.

“Can you explain to me what is a cottage?” This from a middle aged guy in blue jeans and a striped shirt. I find myself struggling to explain to an unemployed Sudanese English teacher the relative merits of a cottage in relation to UK property values.

By now the inner circle is gathering momentum. Dozens are now circling shouting “Allah. Allah. Allah.” Spinning green-man guy is getting into his stride and men are shaking sticks and pumping fists, egging the crown on to join in. Our group is mesmerised. On the one hand there is the chanting and drumming, the heat and the noise, as dervishes exhort the crowd to give thanks and praise to God; and the other hand more friendly faces circle us smiling and saying hello, anxious to be both welcoming and to practice their English.

We find ourselves in the cemetery of the Great Mosque of Omdurman, the traditionally Muslim part of the city of Khartoum, loving this bone-tough, stick-dry country we had flown into two weeks before. Loving the people, the noise, the dust and the heat, even the heady perfume of burning incense that accompanies everything down to the simplest cup of Chai from a street stall. 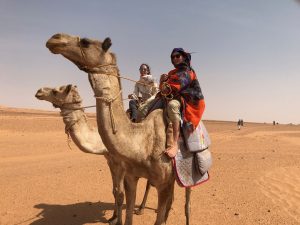 In 1886 General Charles Gordon was killed in Khartoum by the forces of the Mahdi, the awaited prophet of Islam. A force of several thousand British with their camels had been sent south from Alexandria to rescue him. This camel corps crossed 300 kilometres of the Bayuda desert, across the ‘question mark’ that the Nile forms as it flows north towards Egypt. They were too late. Our aim was to recreate this desert route in reverse, crossing on camels or by foot in nine days.

Desert travel is ruled by the sun. By 5.00 AM, tents are packed and headlights mark each of us out as we move around in the darkness. Routine tasks are performed; dress, toilet, teeth, sun block. Blistered feet are taped and padded, boots-on with laces tied just right, socks just-so. Hat, scarf, water, more water, coffee, bread, eggs and walking starts as the sun comes up – the coolest part of the day.

The pattern is the same every day; five hours walking, lunch and a quick nap under a tree or a tarp, then start again at two and walk until the last of the daylight around 5.30. Camp is pitched. We drink tea and fix any medical issues brought on by the heat, the food, or just sheer exhaustion. Sleep comes easily. Nothing cures sleeplessness or anxiety better than a 30 kilometre walk in temperatures over 40 degrees. Tiredness and the view of constellations, circling satellites and shooting stars. In the Iranian desert they call it the million-star hotel.

Deserts are tough places. They’re hot and windy and sand gets in everything. Things take a beating, mostly feet. But they also have a compelling beauty; the vastness, the sparsity of people and the heightened sense of being something so insignificant in the midst of something so vast, all combine to create an environment like nothing else. As Wilfid Thessiger says in Arabian Sands:

“…for this cruel land can cast a spell which no temperate clime can match.” 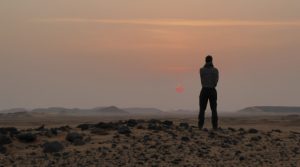 This harshness forges a strong sense of companionship among our group of twelve. All of us are experienced travellers with a wealth of stories, some of which contain a grain or two of truth. A sense of humour always serves a traveller well and being able to take a joke just a bit too far can do wonders for group morale. Morale remains high.

We are led by Luca Alfatti, inventor of the hybrid Anglo-Italian dialect that becomes known as Lucarish. He gives us such nuggets as “Camels are the sheeps of the desert,” “it’s like a breeze of sunshine,” and most mysteriously of all “Hercules was a Nubian.” In between there are other pearls of utter nonsense. It’s my third journey with him.

From the Secret Compass office we are joined by Bryony. She out walks us all, knows everything about kit and sweets and has really awful taste in books and in films. As Luca would say… a breeze of sunshine.

Our route takes us to Abu Clea, a famous battleground on the Gordon/Kitchener relief march. Shallow graves topped with piles of rock lay all around. A half way point, and much anticipated, are the wells at Jakdul. Described as a series of three cascading pools of fresh water back in the 1800s. They turn out to be something of a disappointment. A single pool of stagnant, dirty, fly blown water. The natural rock amphitheatre the pools have created over the years make for a hot, windless and very uncomfortable night.

After nine long, hard days we finally see the tower of the mosque at Korti, a tall white finger standing out in the desert haze and the shimmering hills. On beaten and bloody sore feet, we have reached our goal. Too tired to celebrate we drive on to Metema for a chance to explore Jebel Barkal, home to the Kushite God Amun. 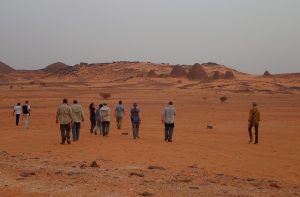 Our local guides take us to the temples and tombs of the Kingdom of Napta and the Kush; the Meroeite civilisation of the region pre-dating Christ and steeped in the iconography of the Ancient Egyptians who came before them. Our Arabic speaking companions talk with great pride of their Nubian culture and heritage.

“The Arabs gave us nothing except their language,” says one.

Our final night of desert camping brings us to the tall pyramids of the Kings, Queens and nobles of the Meroe empire. Sitting on a rock, the sun dawns behind us and  across the valley the pyramids are gradually revealed, bathed in the sunlight of the magic hour. The sense of wonder, achievement and comradeship is almost tangible.