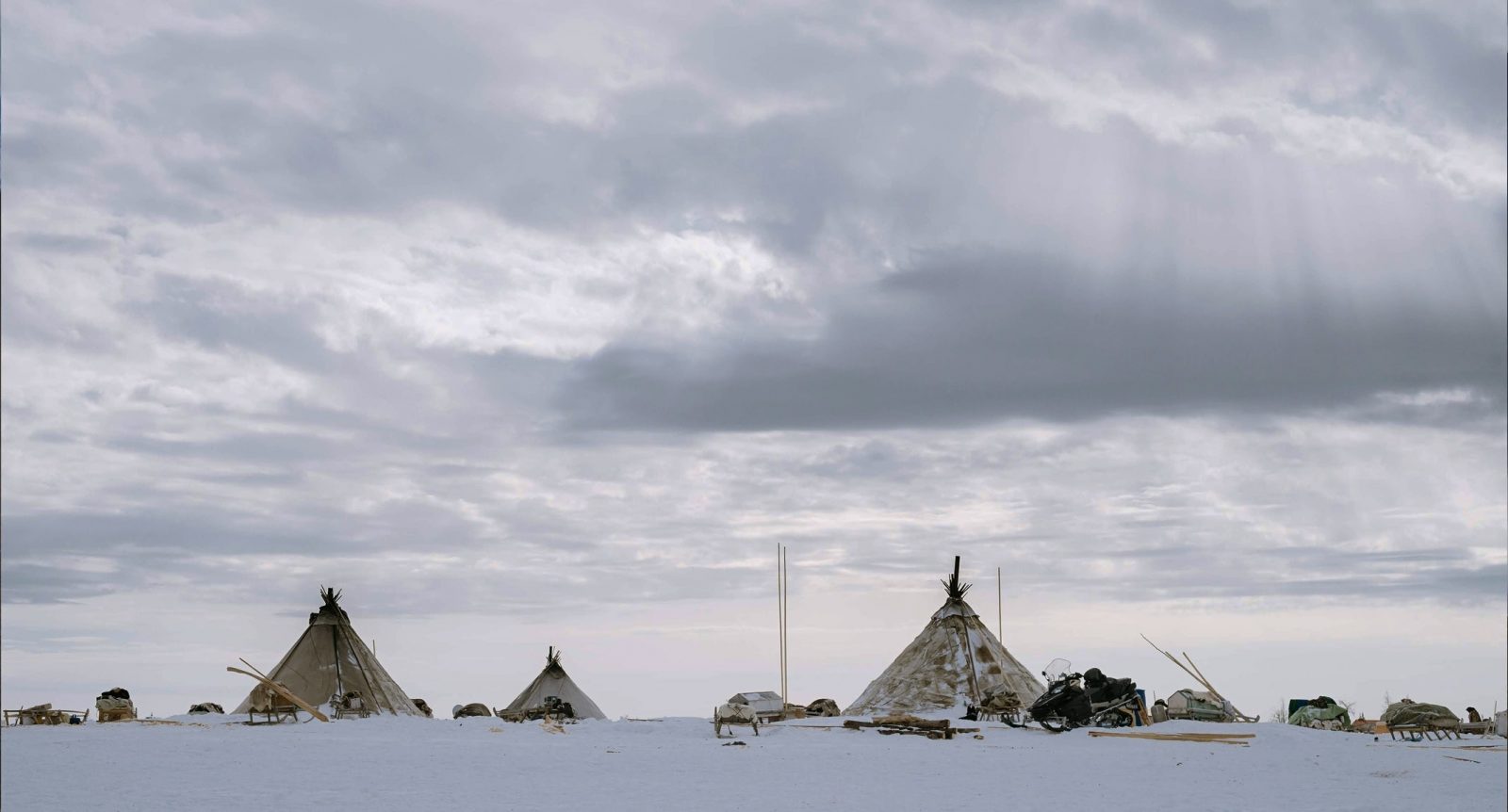 EXPLORING THE ETHICS OF CULTURAL IMMERSION

mutual exchange or cultural dilution at the edge of the earth?

Curiosity is and forever will be at the forefront of adventure. It drives us to discover what lies over that mountain pass or around the next headland, how far we can push, or how daily life unfolds in a culture so far removed from our own, and ultimately experience alone cures the itch.

Inside the Arctic Circle in northern Siberia, the Yamalo-Nenets autonomous region is home to the indigenous nomads known as the Nenets. With a clan-based social structure, Nenets culture follows ancient shamanistic and animistic belief systems. Stressing respect for the land and its resources, they migrate Siberia’s largest reindeer herds, owing every element of their existence to their animals, from their income to their food to their clothing.

“Nenets are proud people. They love their way of life,” explains Australian expedition leader and anthropologist Patrick Barrow. “They’re leaders in their field of animal husbandry, masters of the frozen steppe and connected to the land they steward. Herding reindeer can be profitable and they choose to live on the tundra because they feel at home there.” 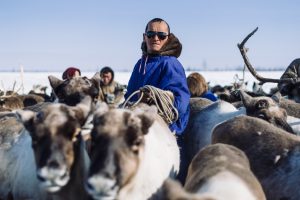 After the Russian Revolution, in 1917 the Soviet Collectivisation Policy forced Nenets communities to settle permanently in towns and villages, eroding cultural identity and putting a full stop to long lines of herding families. Today, less than 50,000 Nenets are spread across a region 750,300 km², UNESCO classifies their language endangered and the industrialisation of land alongside climate change continues to jeopardise their future.

Pat’s line of work has for years facilitated a life of cultural exploration. Before settling permanently (at least for now) in Kyrgyzstan, as a fluent Russian speaker, he spent years travelling and subsequently living in Russia including extended periods in various indigenous communities along the way. In 2016 and 2017 respectively, he spent two, two week long stints with Secret Compass immersed in the daily lives of Nenets communities on the Yamal Peninsula.

“These expeditions are intense, in a sense much more so than a usual expedition,” he explains. “The cultural immersion is extreme. It’s not a self-managed wilderness excursion, you’re a guest in their homes, welcomed into their lives. There are no individual tents to escape to each night, you and they are intimately exposed – habits, manners, struggles, disposition. It’s communal living, sharing chums, sleeping side-by-side, eating and washing together, spending time with family members and children. As such, a raw and uncut two-week life exchange with the Nenets, feels like a much longer experience.” 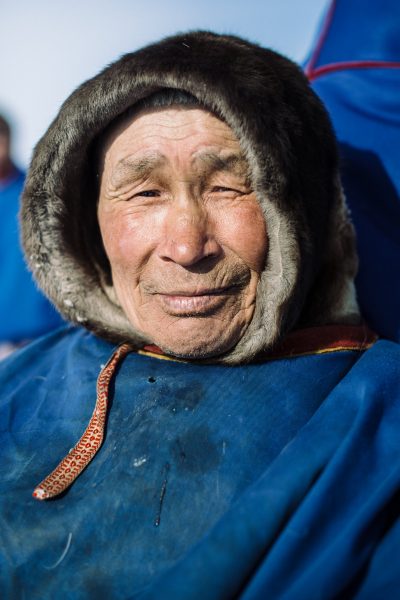 “Some of them mentioned that they tried living in town, but they couldn’t handle it,” Pat explains. “‘Too many buildings, no space, no reindeer, no freedom,’ they’d always say. In town they become no one, their culture is absorbed and Rusified. So, while they may take aspects of Western or Russian culture and adapt them to suit tundra, they move back, to where life is white and wild. By having international guests, they genuinely learn about the world. They’re grateful to expose themselves and their children to the world without leaving the tundra and very proud to have international guests as it’s still such a rarity on the tundra and we as visitors take away stories of the Nenets to share with the outside world.”

It’s not by coincidence that Yamal translates into English as End of the Land. Extending north into the Kara Sea, the Yamal Peninsula sits well within the Arctic Circle. Salekhard, the peninsula’s gateway and the region’s capital, is 4,300km north east of Moscow. From here, a seven-hour drive will take you along the Ob river to Yar Sale. Then, depending on exactly where the Nenets are, meeting up with the brigades can take anything between a couple of hours and all day on a snowmobile.

Enclosed by perpetual whiteness, in the tundra temperatures drop as low as minus 40 as frigid winds rush across the surface of the unbroken barren, flattened landscape. Here, the survival of visitors to the tundra relies wholly on the hospitality of this indigenous community.

“At times, it can be just as challenging for the Nenets to host us as it can be for us to visit,” says Pat. “People of two strange cultures, who have never met before sharing an intimate communal space, there will naturally always be cultural obstacles. But as the time is so intense, relationships develop very quickly. A lot of time is spent in conversation, exchanging stories, translating and building trust and while they tend to be pretty reserved at first, once they see you’re just another person, they open up.”

But in catering for foreign guests, no time is afforded from their normal schedules. Daily life is still tough and the challenges of weather still aplenty, regardless of their temporary company, and for curious visitors, in an unfamiliar environment there’s a fine line between the role of contributing guest and a burden.

“Management of the reindeer reigns supreme, even if it’s at their expense,” says Pat. “The Nenets are well-aware of aspects of the exchange and weigh up the benefits and challenges of the experience. It can’t be a holiday where you’re waited on. As guests, we can be respectful and contribute and that’s easy enough when the tasks are simple. The challenge comes when, due to a language barrier or when there’s a diversion from a pre-established plan, guests don’t know exactly what’s going or when the jobs the Nenets are doing are too specific or beyond our skill level. Chopping wood or collecting snow may seem simple, but in poor conditions or when wood must be chopped very quickly on snow, the task becomes more challenging. The Nenets know we can’t compete with their wood chopping or reindeer lassoing, so while it’s okay to try, when it comes to the crunch, better to step aside and let them do it.” 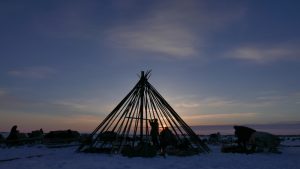 Depending on their herds and weather conditions, the Nenets rarely spend more than a few days in the same location. As such, packing-down and setting-up their chums becomes a routine task, precise and methodical in process. Loaded onto sleds, everything has its allocated place, only to be set up again in mirror perfect fashion.

“As they started to kill the reindeer, Alexei’s father passed me his lasso – the other end roped around the reindeer’s throat. Together with Alexei, we pulled hard on our lassos until the reindeer took its final breath.”

“This domesticity provides the Nenets with stability in an otherwise void landscape and the routine systems allow them to set-up quickly in a storm or in the dark. But if we don’t know where everything goes, it’s better to step aside and await instruction,” explains Pat.

Perhaps a more grizzly aspect of the Nenets culture is the unequivocal killing of their own reindeers. A vital component of Nenets diets, meat and blood is often consumed raw. Often prepared on the tundra floor, smears of red juxtapose against the unspoilt white. Reindeer death though, is not something taken lightly. With their heads always facing east by tradition reindeers are strangled by lasso careful not to waste a drop of blood. It’s a duty reserved exclusively for male elders within families, systematically executed and very rarely participated in by anyone outside of the communities. 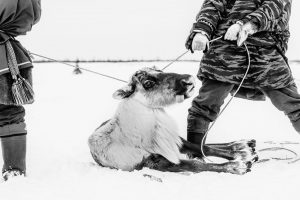 “By the end of my second expedition I was honoured to be asked to help slaughter a reindeer,” Pat recalls. “All the SC crew were out with their families doing different jobs, and I was back at the chum with Alexei, and his father. As they started to kill the reindeer, Alexei’s father passed me his lasso – the other end roped around the reindeer’s throat. Together with Alexei, we pulled hard on our lassos until the reindeer took its final breath. Instantaneously we began skinning the animal until the women came from the chum to help cut and manage the meat.”

Governed through strict belief systems, while they may seem arbitrary to outsiders Nenets culture contains a maze of traditional rules, particularly around gender roles. A major aspect of women’s lives for example is sya mei, a force which puts behavioural restrictions on anyone connected with birth and death – be it new born children, attendees of a recent funeral and all post-pubescent women. Women must not step over or sit on lassos, ropes or harnesses or cross an unmarked line which runs from the central pole in the chum to the sacred pole at the back of the chum and out into the tundra.

“Some of the older Nenets women commented that when the younger children saw Westerners not strictly following all the traditions, they began to think it was alright for them to do the same. Inevitably there was some discussion about this amongst the women, but they decided that in the end the benefits of having us outweighed the negatives.”

As Mark Twain put it best, ‘travel is fatal to prejudice, bigotry and narrow-mindedness’ and seldom does the sentiment ring truer than in experiencing cultures of Earth’s farthest reaches, amongst communities for which we know so little and where Western influence is minimal. But as travellers striving for mutual cultural exchange, our responsibility lies in a mindful approach to seeking those experiences.

“Some may say that foreigners can culturally dilute a place, but a small number of travellers can definitely be positive. Ideas and skills are exchanged, money ingested by the local economy and the re-telling of the traveller’s tale educates others about a culture and history of a people who may otherwise remain unknown, sometimes capturing a fading cultural light,” says Pat. “It’s almost impossible now on Earth for a culture to exist independently of any other. It probably has been for some time. Lines have become blurred since the early days of the Silk Road and ocean travel. ‘Culture’ long ago ceased to be a one dimensional, stand-alone entity. Specific habits or beliefs may be unique to a particular group but there are always other characteristics which are shared with others. In this way, all cultures are fluid. If they don’t adapt or change, they die out. Some elements, like the telephone, will become universal, considered ‘world culture’ but aspects like reindeer herding and the need to maintain nomadism to manage the herd, will remain.”

Perhaps ironically, experiencing the unfamiliar presents opportunity for genuine introspection. A chance to ponder our own time on Earth and our relationships with each other – the connections we form and the stories we tell of these adventures are the tangible relics which surpass our own existence.

“Spending time in the tundra forced our entire group to question who we are. In terms of gender roles within society, in relation to other travellers, Western vs Eastern assumptions and attitudes regarding a whole manner of subjects,” says Pat. “Storytelling can play a role where the minority subject has no social voice. It’s important however not to objectify the subject, or to story tell with a colonial voice. We should always be aware of who is telling these story and what personal, cultural or social bias – intentional or not – they may subconsciously embed in their recall. The story of the Nenets is surely best told by the Nenets – oral storytelling and passing on of traditions within their own communities are powerful tools for the continuation of a living history.”