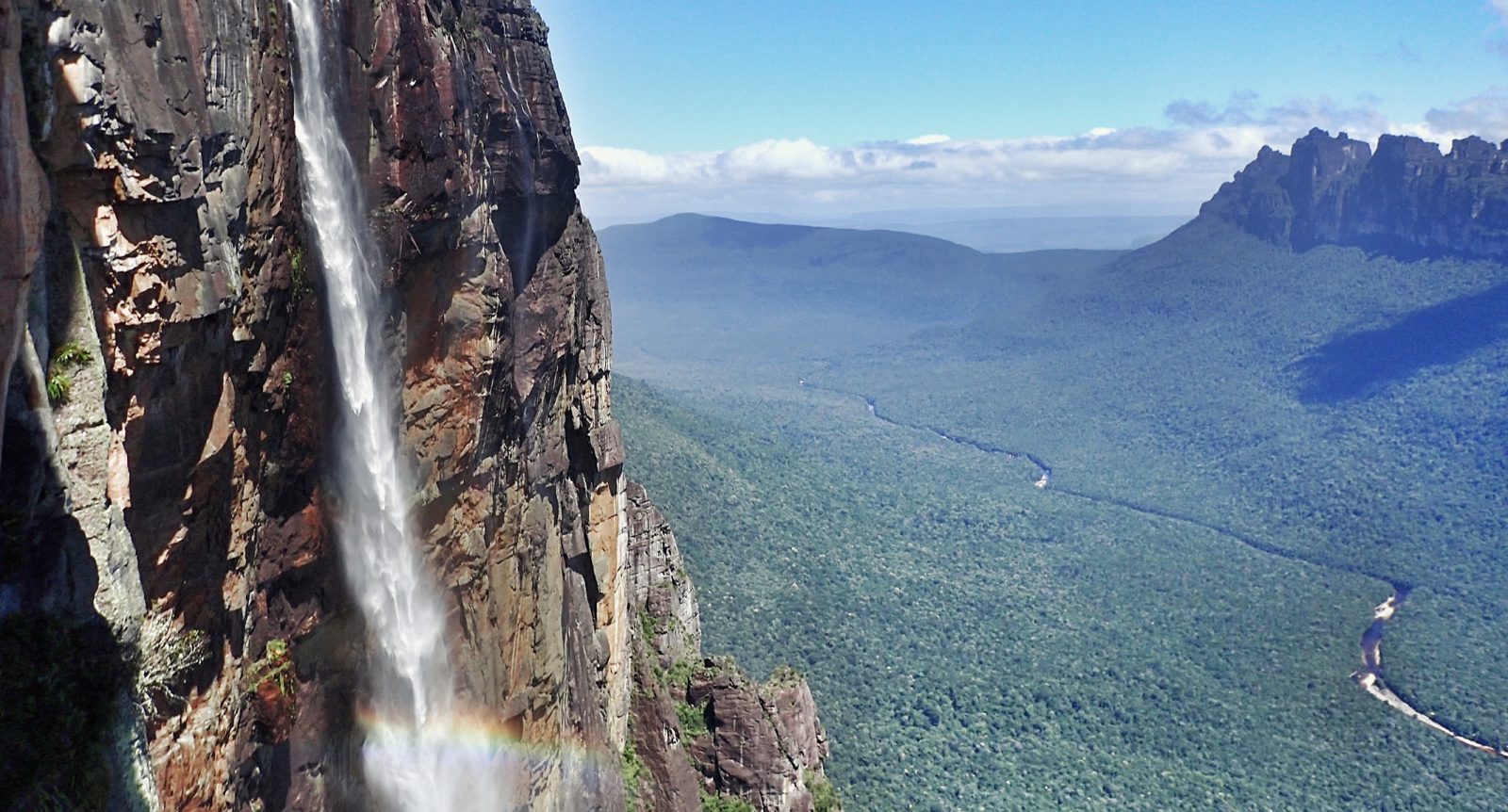 the story of abseiling the world's highest waterfall

Take a deep breath. Focus on maintaining weight in the bottom of your legs to anchor your stance on the brink of oblivion and for God’s sake watch your step. Tentatively leaning forwards you get your first glimpse over Auyán-tepui’s eastern ledge. Locking on to a single patch of water, you watch it shatter into a million droplets. Though much of it will drift away as a fine mist long before it reaches the base, it cascades almost a thousand meters to the jungle canopy below.

With a concoction of nerves, adrenaline and exhaustion running riot through their bodies, this is where January’s Venezuela expedition team faced their fears. Peering over the edge means the five day hike to the summit was behind them. The following morning, they’d commence their abseil descent of Angel Falls, the world’s highest uninterrupted waterfall.

In January 2018, Secret Compass led a team of five to abseil the length of the falls. Best passed on by the acrophobes among us though, it’s virtually impossible to prepare for the extreme exposure the team would face during the two day, 23 rope length descent of the humungous wall.

Now, having returned to the every day of their respective lives, we caught up with Italian teammate Daniela to hear her experience.

So talk us through the first time you saw the falls in the flesh?

We first saw the tepui from the plane on the way there. The pilot was very nice and circled above it to show us the waterfall. It was exactly like the first scenes of Jurassic Park. I was super excited more than anxious. At this stage, my brain refused to process what I was actually going to do so I just enjoyed the view. No reason to get too anxious until you actually have to. In any case, there was no way I was going to make it back without abseiling the waterfall.

Can you describe looking over the falls for the first time?

Wow. My heart still skips a beat when I remember the moment I looked down the waterfall. When I looked over the edge I felt like I had a super powerful hoover in my stomach sucking everything. My knees went to jelly and my head was light.

I don’t normally have a problem with height but the power of attraction of the void was overwhelming, almost surreal. I didn’t want to say it aloud, but I was really scared. I concentrated and focussed on one thought to myself, “I know I can abseil on a small wall. If I can abseil looking only at the rock and not at the void behind me, I can pretend I’m on a small wall and everything will be ok.” 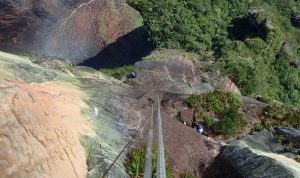 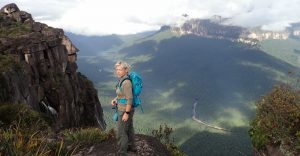 And the first step over the ledge?

After a few meters, the rope started rotating as I reached an overhanging pitch with no contact with the rock or wall. I faced the immensity of the world around me and you know what? It was amazing! All fears gone. As for many things, the first step is always the most difficult.

At the beginning the tension is so high and then you relax, but there is still the uncertainty of the first landing. As I stepped onto that first ledge, I had to sit down and make myself small to process it all. So many emotions crossing my mind, but the main thing, I can do it. The answer to the question I’d been asking myself since the moment I booked the trip. And then, there wasn’t really any time to think, a new view to look at, new pictures to take, new abseil to do, just feeling and enjoying it.

And the rest of the abseil then, how did it go?

In the end, this was the easiest part of the trip. And it went so fast.

On the first day, we mainly had to follow the wall, vertical with very little vegetation. In different spots we found ourselves on an overhanging pitch with no contact to the rock or wall but none of that was really scary. For me being fairly inexperienced, the whole process felt like walking in the street. From time to time you lose your foot or stumble over a stone, but you get up and start again.

I didn’t feel pressured at all but it was extremely powerful to stop from time to time just to think about where I was in the world and what I was doing. The view changed continuously depending on our position and the rocks around, and it was spectacular. Though I didn’t take any pictures because I didn’t trust myself with a loose camera. 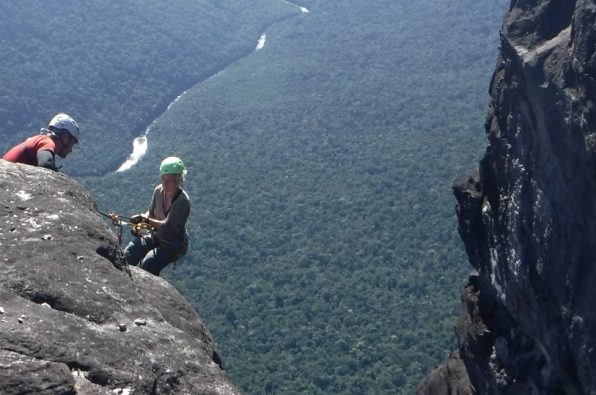 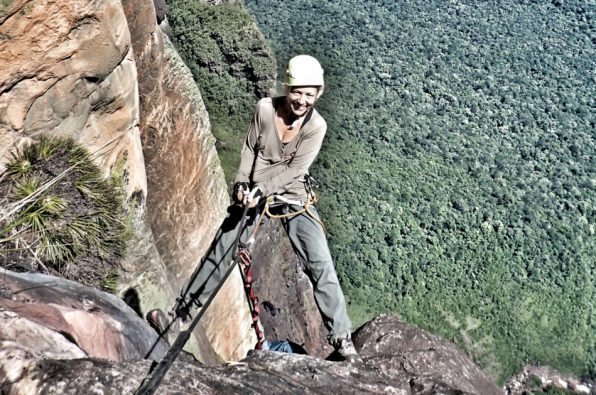 The second day was totally different, instead of a bare wall we faced a vertical forest. We lost the waterfall but gained a Jurassic Park like jungle. In an instant it felt like we were down but I enjoyed it enormously. The abseil was a little more technical, so I had to concentrate more on what I was doing. It felt like a mixture between an Indiana Jones movie and a video game, dodging all the trees and branches below.

I think one of the reasons I felt so relaxed and happy is that all the four guides made me feel like they believed 100% I could do it. So I trusted myself more. They made me feel totally safe and protected to the extent possible in such a situation. I really appreciated their calm and professionalism. 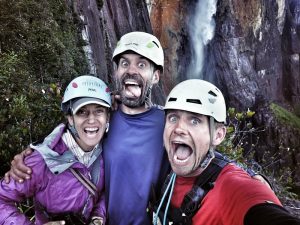 Did you get wet?

No, we had a great weather and it had been good for a few days, so there were no additional waterfalls on the side.

How did you find sleeping on the ledge half way down?

Much easier than I expected, though I doubt we could have fitted more people in the space.  It was spectacular to wake up and see the waterfall even if the morning was a little misty.

Because of the clouds, we didn’t enjoy the starry sky we expected from the wall, but we had our prize anyway. After dinner, the guides surprised us with an amazing dessert, a home-made chocolate salami (put together in the camps along the way)! We didn’t expect anything, considering the limited amount of weight we could carry on the wall, but the surprise was more than welcome. 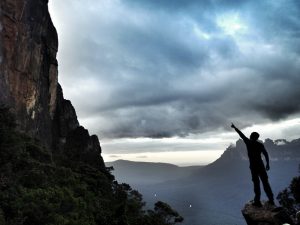 I have to say I am glad I watched the Steve Backshall video on his expedition only when I returned. I probably wouldn’t have slept so soundly thinking about all those insects. The good thing about insects is that they’re very good at camouflaging themselves and I definitely don’t go around trying to spot them.

There were no real frightening moments. Maybe the worst one was the night before starting the abseil. The rocks were all wet, it was dark and I was looking for a pee-spot with a tiny light from my head torch and very slippery pink Crocs on my feet. As you can guess, I slipped a little and thought “this could have been the worst ever, slip on a rock while going to pee and injure my ankle. The worst ever reason for failing to abseil, after all these days.”

On the wall, only the first step was scary, then it was fun.

And of course, before all of this, you had to trek for five days to get there. How did you find that?

I found the first two days the most challenging. We were totally exposed to the sun and it was incredibly hot and steep. But I loved every single day, since each was so different, different terrain and different obstacles.

I appreciated the briefing we had each evening, and I loved even more the names that the guides gave to each following day, the Rice Fields, the Pick-Up Sticks Forest, the Multi-Hills Day, the Game of Thorns. Though Rice Fields was a very complimentary description of the swamps we crossed.

Finally, the last day before the waterfall was very long. And the last two hours before getting to the camp were extremely challenging for me. The path was really messy with branches everywhere and mud steps and trees etc at the end of the day my legs were covered by big blues, I counted at least 18. 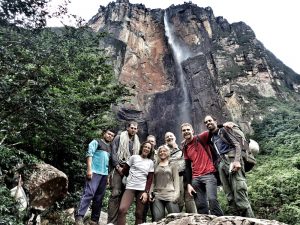 Reaching the bottom of the falls to place your feet firmly on the ground again, how did that feel?

For me it wasn’t really a big moment, because as soon we finished the abseil we still had a two hour steep walk in front of us with the full 20kg+ bag. And that was the thing that worried me most from the beginning. I hate carrying big bags and my backpack was as big as me.

But after one hour of walking, we took a little detour and ended up in a small natural pool created by the waterfall. We jumped in and that for me was the happiest moment of the whole trip. From the pool we could almost see the entire abseil track and the feeling of accomplishment was intoxicating. The water was energising and there was a little waterfall we could play with. Magical.

I found the walk from the end of the abseil to the camp much more physically exhausting than the whole two days of abseiling. But I have to admit that I collected a couple of additional bruises on the wall/ I also scratched my Garmin watch in this case definitely a bonus, because I will always have a  great story to tell.

What are your lasting feelings from Venezuela as a country?

Venezuela is an incredibly beautiful country with extremely nice people and amazing scenery. Unfortunately the country also leaves you with a feeling of powerlessness and despair because of the way it was ruined like I’ve seen anywhere else by a selfish political class. 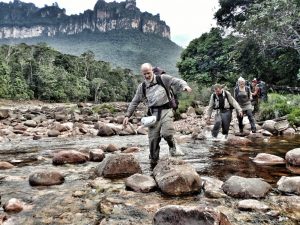 Did you have much previous climbing or abseiling experience before this?

A long time ago when I was at university in France, I used to do some outdoor climbing. Over the years I sporadically went to a local indoor wall. Before the trip, I took some refreshing classes focussing in particular on abseiling.

So, abseiling the world’s biggest waterfall, what was the motivation for joining the team?

It was love at first sight. The moment I saw the trip online, I knew immediately I wanted to do it. I like holidays that stand out. Experiences rather than holidays. I like being in open spaces, in contact with nature, life and animals. Time spent in cars feels like a waste. Sport is an important part of the holiday, even better if it’s an unusual and challenging sport. Trekking on its own doesn’t normally interest me, but in this case trekking was only means to an end, getting to the top and abseiling the world’s biggest waterfall. The whole trip had a story to tell. And last but not least, I’ve wanted to go back to Venezuela since last time I visited it in 2013 but I didn’t dare going on my own again, I needed an agency I could trust.

So, now you’ve ticked off the world’s biggest waterfall, what’s the next adventure on the cards for you?

You tell me. Actually I’m really not sure, right now it’s difficult to find something even remotely comparable to this trip. I have a couple of ideas, like packrafting in Slovenia in August and maybe horse-riding in Namibia. But as usual, I will be keeping my ears and eyes open looking for new exciting experiences that can capture my imagination. 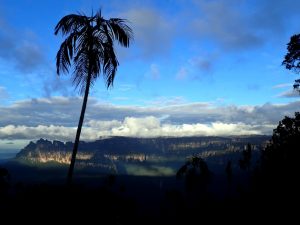 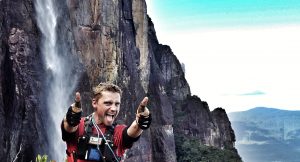 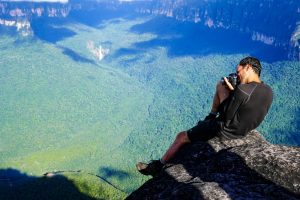 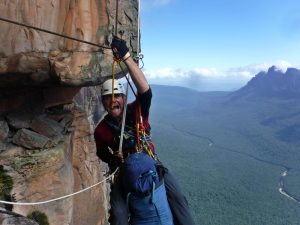 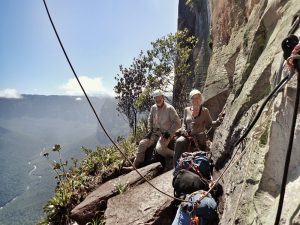 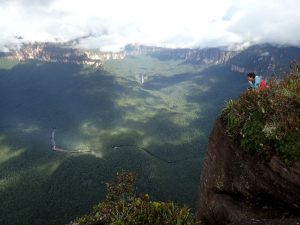 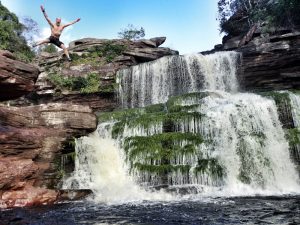 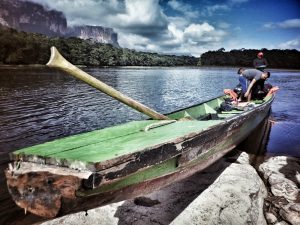 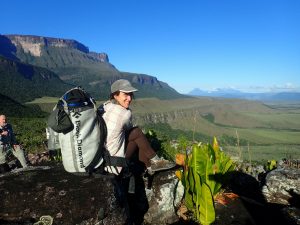 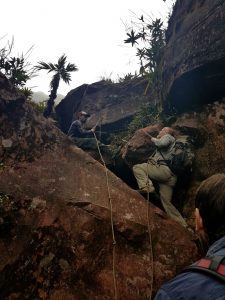 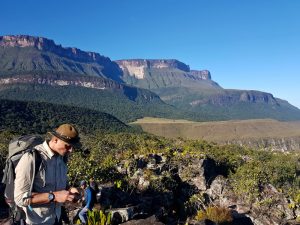 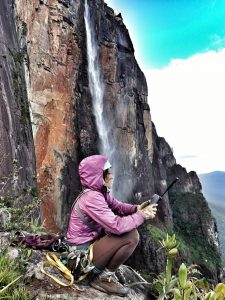 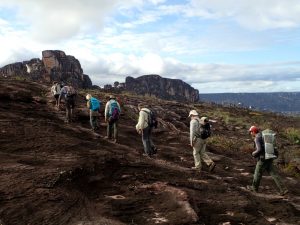 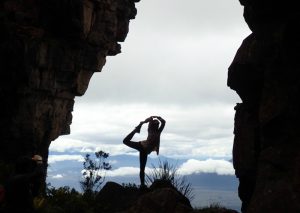 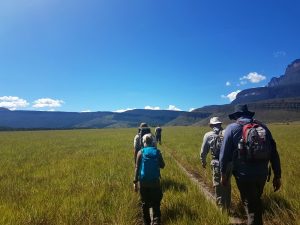 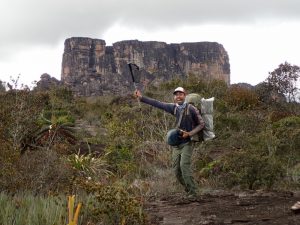 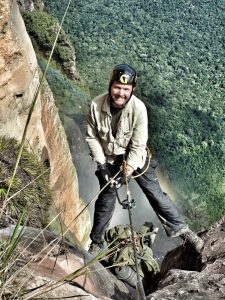 For details of our 2019 Angel Falls expedition including how to apply, click here.