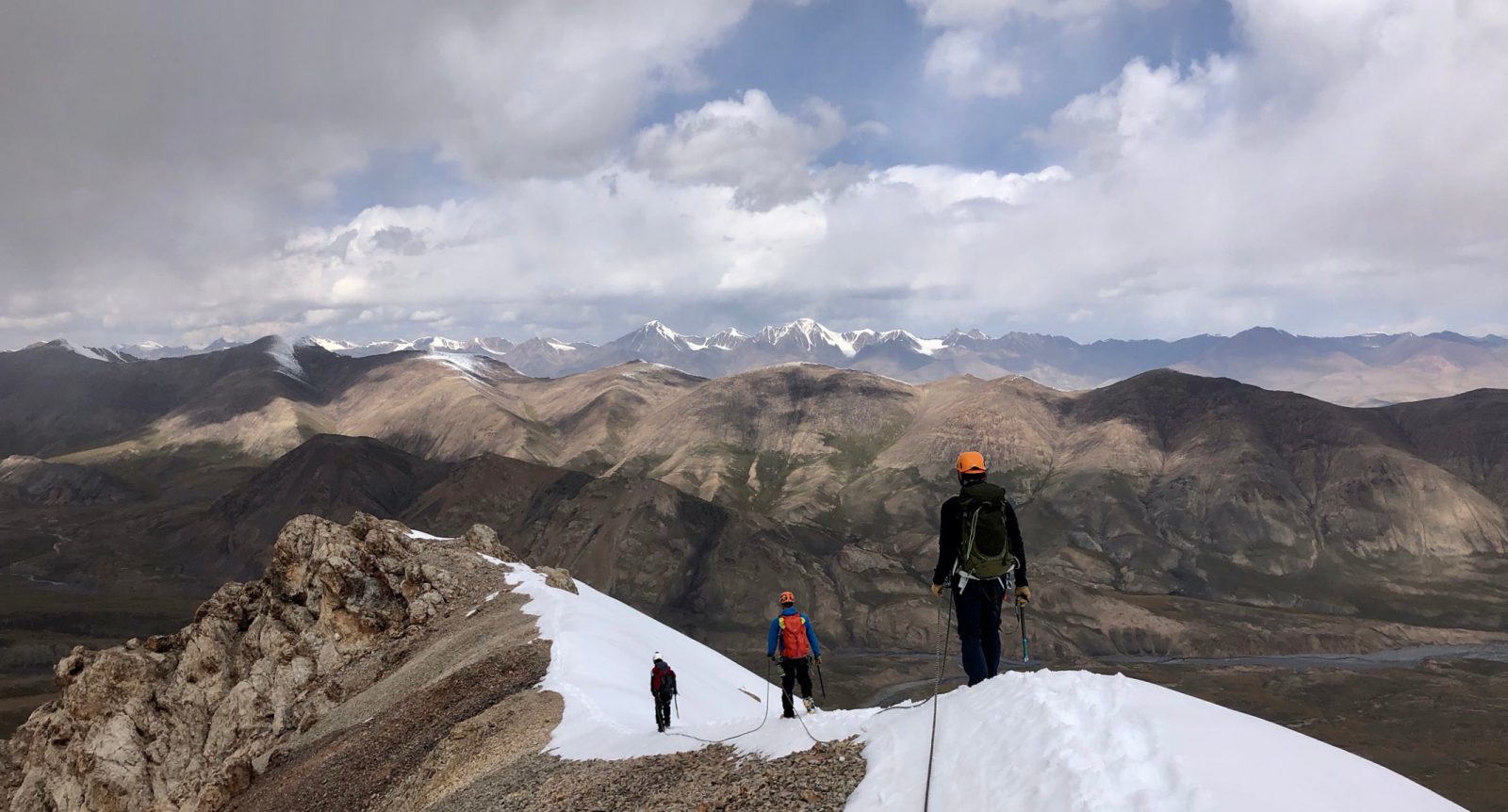 HOW TO SCALE AND NAME AN UNCLIMBED MOUNTAIN

The draw of the unknown is a powerful beast – something with which over the years the Secret Compass team has developed a borderline unhealthy obsession. The idea of setting foot somewhere few or perhaps even no one has before you is a tough experience to top. With every possible opportunity, we make this notion a centre point of our expeditions, pioneering new routes and, in some cases, new trends in tourism as we go. For our 2019 Kyrgyzstan team, this notion took the form of a remote region in the Central Tien Shan mountains with unclimbed and unnamed peaks in our cross hairs.

But while this idea of pioneering new routes on mountains is alluring, it’s not something anyone can simply dive into without the relevant skillset and prior experience to enable their safety on the mountain. So how do you get to the point of tackling unclimbed mountains?

For medical doctor Klara Weaver, a career shift into remote wilderness and mountain medicine meant she needed to skill up in alpine regions and in 2017 she joined our alpine course in Georgia. She loved it so much that in 2019, she can back and joined our first ascents expedition in Kyrgyzstan during which the team successfully summited an unclimbed peak, which they named Peak Nomad. On the team’s arrival home, we caught up with Klara to hear how she found herself out in Kyrgyzstan and to get some of her experiences from the expedition. 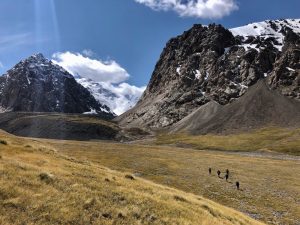 How did you first hear about Secret Compass and what led you to join the alpine skills course in Georgia?

I heard about Secret Compass through someone I work with at a medical company called Exile Medics. He suggested I look into it if I was keen to get pure expedition experience before starting to self-organise. My passion is the mountains but I had never done any winter skills training before.

I’ve never been one for group adventures and have previously travelled with friends or alone. But for the types of things I’m interested in doing now as I advance my career and interests that just didn’t quite fit from a risk perspective. 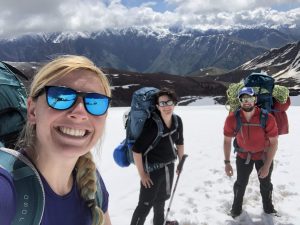 What was your experience in mountains prior to Georgia?

I’m working towards my summer mountain leader in the UK so I had a decent amount of experience in the mountains particularly from a navigational perspective. I had also done some hiking in the USA in Maine, as well as a little altitude experience in the Alps. Kazbek would have been my highest summit though.

What did you learn on the course?

I learnt a lot of skills in crevasse rescue, in basic and more advanced ice axe techniques and moving in crampons. I also learnt some basic rope skills and refreshed my rusty climbing knowledge and a lot about group dynamics, expedition psychology as well as the soft skills around expedition teams. Two of the members of my team dropped out at different points, which eventually made our summit bid unattainable. I definitely learnt a lot about myself and how I handle a sudden change in goals. 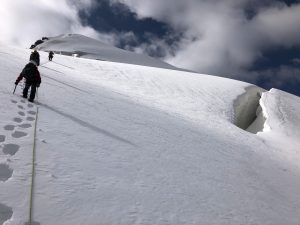 And then of course you went on to join the first ascents expedition in Kyrgyzstan. Was a more technical mountaineering trip always part of the plan?

Yes. Georgia was definitely a springboard into winter skills and alpine style mountaineering. I undertook a further skills course in Scotland, started trad climbing more and brushed up on my rope skills. I was uncertain how I would cope in an expedition environment when I went to Georgia but I came back with a good appreciation of the mindset and skillset, and most importantly, the gear I would need to upgrade!

How do you feel the alpine skills course equipped you for making a first ascent?

I feel that it was a good introduction and my instructors Phill and Matt were phenomenal. Unfortunately I didn’t feel like we got to fully reconcile the skills we learned with a climb up the glacier. We also had an experienced alpinist as a team member which added lots of value because I had someone else in the team to learn from when the instructors were sorting out safety equipment and other team members. 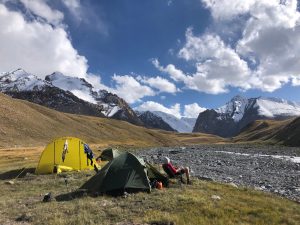 How did Georgia compare with Kyrgyzstan?

The most difference was the team. I think that Georgia being billed as an introductory trip undersold the more taxing aspects of actually being on expedition which led to our team breaking up early on. Kyrgyzstan’s team however, was a fantastic blend of skill, strength and experience which made the expedition memorable. In terms of difficulty, I actually feel that apart from the amount of time on expedition, there was no difference. You’re still at altitude with all the challenges that brings, and you’re still in a tent.

In a way, the lack of a basecamp in Georgia made it in some respects more challenging because the cooking and carrying of food was done by team members and guides. I was pleasantly surprised by the basecamp setup!

Do you have any favourite moments from the Kyrgyzstan expedition?

There are so many moments to choose from that it’s hard to pick one. Listening to Ashley Hale’s adventure stories is always a favourite, it felt like story time in the basecamp tent, as well as listening to Toby and John geek out about computer engineering. If I had to pick two moments it would be the naming of the first ascent, and the summit of the third peak. We were in the basecamp tent flushed with success and happily fed with amazing food when Mischa our guide pulled out a lightly chilled bottle of vodka from Russia.

The name of the vodka was nomad. As soon as Mischa had translated, John’s face lit up and he said in a hushed voice, “nomad, nomad peak. Should we name it Peak Nomad?” We had been trying to figure out a clever anagram and suddenly our solution was literally right in front of us. Plus, who doesn’t want to name a mountain after a victory vodka? The name was unanimously decided on and toasted enthusiastically with our peak’s namesake.

The second moment was trudging on tired legs across the snow to the final summit, our third in nine days, after a challenging ridge line and crevasse crossing. I had expressed my doubts and worries to John in our tent the night before, my legs hurt, I was tired and I was scared I’d quit. Reaching the top, last on the rope with all my new friends waiting for me was a very emotional, exhilarating moment that I’ll cherish as one of my defining moments as a mountaineer.

It was improved by Chris Shirley’s reply to me saying “I didn’t think I’d make it” with a cheerful, “don’t worry, we would have dragged you up anyway!” 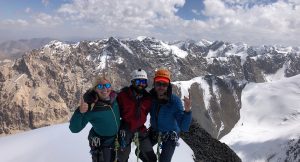 It sounds like you had a great dynamic on that team?

The team dynamic was fantastic, and from the outset it was obvious that this was a group of experienced, fun and interesting people with a single goal. Knowing that the aim was to summit something unclimbed, and for that to be a goal both for the team and for Secret Compass was important to our success. We had something to work towards and it was a lifelong dream for some, and we knew everyone would push together to make it happen.

Chris Shirley – what a man. I challenge you to find a more inspiring, humble and coffee obsessed team leader. He gave the team the breathing space it needed to form naturally, letting us take the lead on decisions and gently guiding the team back to reality when we got too excited. He was a fantastic expedition leader in that he wasn’t always focused on being in that role, which can be challenging. I personally really enjoyed getting to know him, and everyone in the group. John and I are already planning our next venture, and Ashley and I keep in touch by email.

How tough did you find it?

Kyrgyzstan was exactly what it said on the tin, doable but not easy. It was a challenging environment and the mountaineering was daunting at times. However, Mischa made me feel like no problem was too much to overcome, Chris cheered us all on and the team carried each other up the mountain. I would recommend it to anyone with alpine experience and expedition experience. It is not easy by any means and though I enjoyed it, to underestimate it as a trip would be reflected in how difficult one finds it. 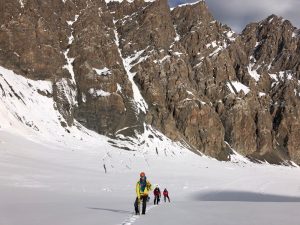 I have just come back from Nepal after a short jaunt around the Annapurna region. I am looking to undertake a diploma in mountain medicine, and I am moving to Wales where the mountains will be on my doorstep! Kyrgyzstan gave me the confidence and credibility within my career to start making more independent steps into the expedition medicine community. As for more trips, expect another application soon, I’m hooked!

Click here for more information on he next Secret Compass expedition to Kyrgyzstan. 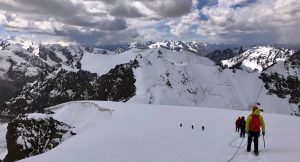 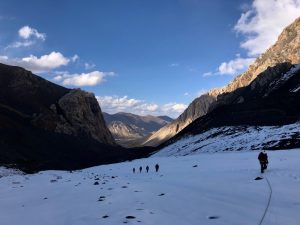 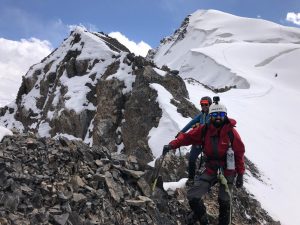 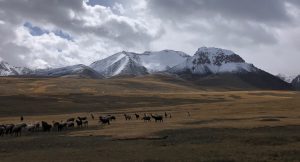 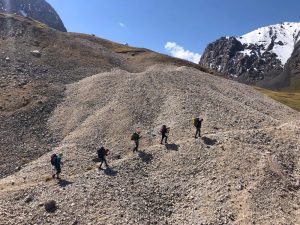