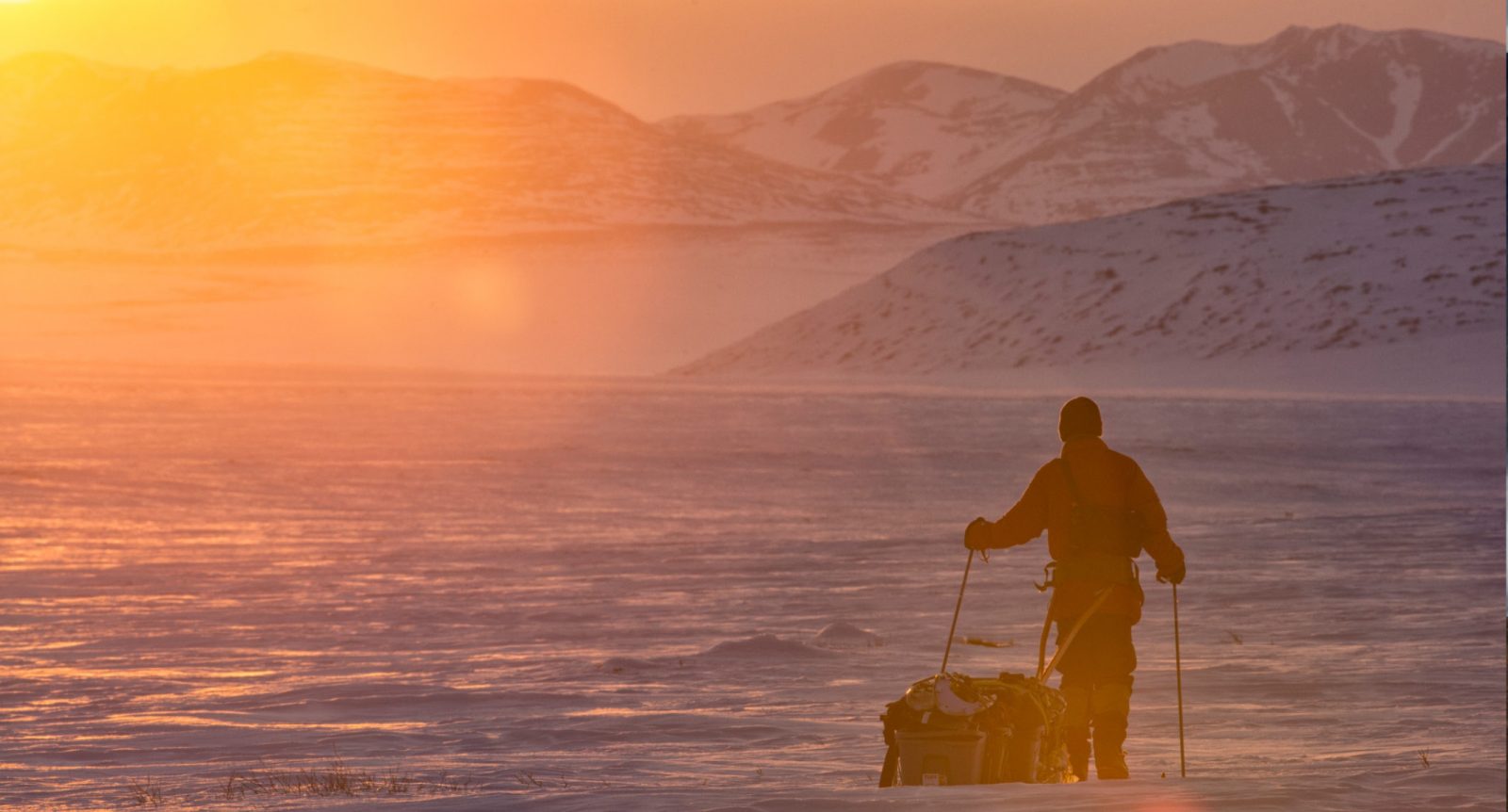 IN PURSUIT: THE MIGRATION OF THE PORCUPINE CARIBOU

a race against time

The porcupine caribou herd are a barren ground caribou with the longest land mammal migration in the world – covering 1,500 miles or 2,400 km each year – form the arctic lands of Yukon and Alaska to their calving and nursing grounds on the coastal plain of Ivvavik National Park and Alaska’s Arctic National Wildlife Refuge. Today, the health of the herd is threatened by possible oil and gas development in ANWR near the Prudhoe Bay oil fields.

Photographer and conservationist Peter Mather was on his first winter expedition when a series of setbacks threatened to put three years of planning in jeopardy. On a return trip to his native Canada to capture his dream photo and bring to attention the threats to the survival of the Porcupine caribou, he was met with a challenge that would push him and his partner to breaking point. Peter Mather’s ‘In Pursuit’ tells the story of two conservationist photographers who were suddenly faced with a two-week ski expedition they never expected. 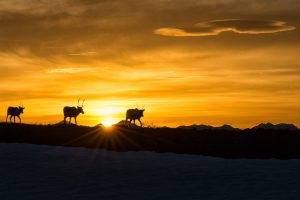 I was experienced in summer expeditions. Doing month long canoe trips had become familiar to me and I knew how to prepare for them. Everything about this expedition though was in stark contrast to what I had done before. It was the first winter expedition that myself or my partner, Marty, had ever attempted and we needed to use everything we had learnt in preparation to make it a success.

We set out on an expedition to north-western Canada in an effort to capture the longest mammal migration on the planet. Every year the Porcupine caribou migrate in the thousands through the Crow Flats in north-western Canada. Being from this area of Canada myself, I had heard many stories of the sheer size of their migration and the teamwork they employ when moving in winter. The problem is that they now face a serious threat to their survival due to industrial development which puts the calving and nursing grounds of the caribou in danger. We wanted to highlight issues facing the Porcupine caribou with an intimate image showing the herd moving as one, down the mountain and through the valleys of the Crow Flats. 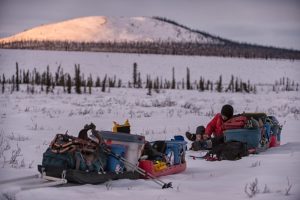 The plan was to fly to Margaret Lake where we would set up base camp and wait patiently for 200,000 caribou to migrate through the valley and form the dream photo we were after. However, due to technical faults on the plane we were forced to land 120km away from our intended destination. We were left with no choice but to ski to Margaret Lake –  something we hadn’t anticipated doing, further complicated further by the fact we were carrying 700lbs of heavy equipment and were under immense time pressure to get to the area before the caribou did.

Skiing over the frozen lake on the first part of our journey gave us the false impression that our ski expedition wouldn’t be as difficult as we had first thought. Moving into softer snow soon made the expedition significantly harder. Despite having only covered 13 kilometres, trudging through the soft snow had left us feeling physically and emotionally exhausted. Marty’s feet were so swollen they were essentially two large blisters whilst every muscle ached in both of our bodies. We still had over 100 kilometres to go in what was already looking like the most intense physical and emotional expedition of our lives.

Realising we had to change something in order to arrive in time to capture our dream photo of the Porcupine caribou, we swapped to a night-time schedule in order to make the most of the cold hard snow. The cold night crust allowed us to ski significantly faster. All of a sudden, we were covering 10km a night and it seemed like we would arrive in time for the Porcupine caribou. Knowing we had to get to Margaret Lake as quickly as possible, we were praying the strong crusted snow wouldn’t break. Sinking metres down into the snow would’ve meant a return to trudging through soft snow. Fortunately, we managed to maintain a fast pace which would never have been possible in the daytime. 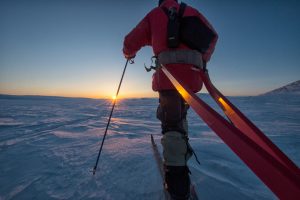 We were skiing in late winter/early spring which was a time of year in Canada where the sky would never get totally dark. Instead, it would simply turn to a dark blue for a few hours. It was when I was skiing side by side with Marty under the brilliant blue sky that I felt a kinship with Gwich’in First Nations people who travelled this route for centuries.

Skiing at night didn’t negate all the challenges. The lead skier was having to do 3 or 4 times the work of the follower. Fortunately, whenever I got to breaking point after having led the way for hours, Marty could always tell and would offer to take over as lead skier, as I would with him. It was crucial we worked together effectively in order to make the best of our circumstances.

Our journey was taking its toll on us physically and mentally, we were pushing ourselves as hard as we could, every day. Luckily though, despite the challenges we were facing, we had prepared thoroughly for the winter conditions we were facing. In our preparation, we had meetings with an experienced ski expeditioner and friend from the Yukon – Peter Heebink. He advised us on things we would never have known, like to use a high-quality winter sleeping bag and a sleeping mat rather than a tent. In winter, tents fill with condensation and are a huge hassle without being very effective. Sleeping outside, the snow didn’t even melt on our sleeping bags because they were so efficient – we were comfortable at plus 20 in the sleeping bags despite it being minus 10 outside.

Perseverance, teamwork and expert advice resulted in us reaching our destination after just ten days. It was the howling of the wolves in the forest ahead which signalled we had arrived. We had pushed ourselves to our limits over those days of intense cross-country skiing. Having finally made it to our destination, it was at this point that we learnt from our satellite phone that the caribou had stopped migrating as soon as we got off the plane. Our efforts to arrive as fast as possible were essentially pointless. We would have to wait for the caribou anyway. We were nevertheless still safe in the knowledge that our pursuit of the perfect photo of the caribou was still on. So, we stationed ourselves at basecamp – waiting in anticipation. 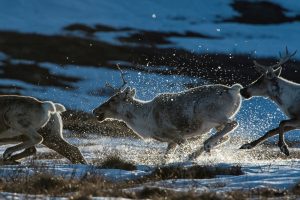 As we were waiting for the caribou, we were hit with one final curveball. A dramatic increase in temperature. The weather changed the landscape from a harsh winter scene to a luscious green summer. When the caribou finally passed through, they did so in disparate groups of fifty – slowly grazing on grass. Any chance of the perfect photo had now evaporated.

Inevitably, we were disappointed but when you have a job like ours it’s simply part of the process. Whilst, I may spend a month chasing a perfect caribou photo on skis and not get it, I may drive down some remote road a month later and get the best caribou photo of all time. At the end of the day, all you can do is put the work in.

Despite looking back on the expedition with fondness and good memories, we initially never wanted to experience what we went through ever again. However, the adventure, storytelling and environment is too much to resist. We quickly forgot about the hardships and made yet another unsuccessful attempt. When it comes down to it, it’s easy to get motivated for these trips even if they are unsuccessful because we both love adventure so much. Being a conservationist photographer also gives these adventures more purpose. The inspiring photo we are seeking is for a good cause.

To find out more about Peter’s story click here.