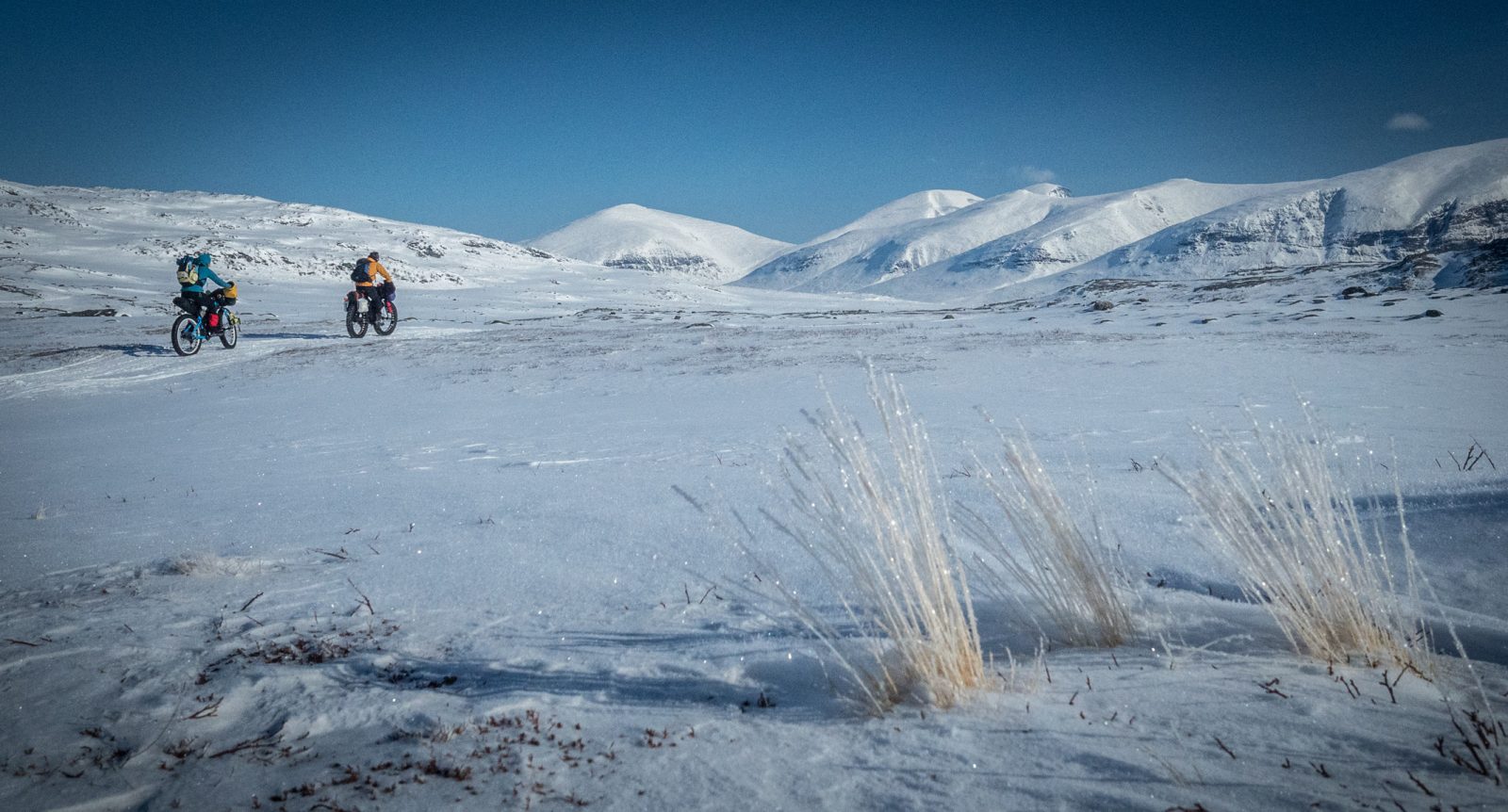 a fat-biking expedition into the arctic circle

Outdoor educators by profession, Huw Oliver and his partner Annie aren’t your ordinary fat-bikers. Drawn to colder climates where cycle tracks don’t exist and battling temperatures of -20°C is the norm. Camping in the snow and marching through miles of tundra, Huw and Annie’s latest adventure saw them cycle across Lapland in the middle of winter. Below Huw takes us through some of his defining moments from Lapland.

You can read more about the expedition here.

I can’t remember who said it, but my partner Annie and I were in Iceland in 2014 and one of us wondered out loud how amazing the interior of Iceland would be in the winter. A couple of years later we planned a route and set off. Something about that trip sparked a love of cold-weather exploration in us, something to do with freedom and possibilities.

We’d always been keen to visit Scandinavia after that, the lure of an adventure in a “proper” winter winning us over. So many Scandinavians clearly enjoy and thrive in the climate up there that we wanted to know what all the fuss was about. At home most people said we were mad or masochistic, or that it was crazy to want to cycle across Lapland – and to be honest, it probably was. But it was something we had in our heads and once that happened, we couldn’t shake it. 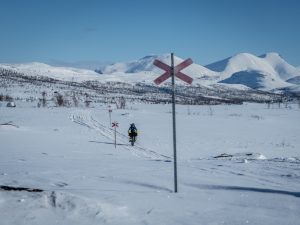 Obviously, deep in winter when Lapland is covered in snow, it’s almost impossible to follow a trail – they literally change from day to day. But we were able to follow one in places, called the Kungsleden trail that runs between the Sami villages of Abisko and Kvikkjokk. En-route, we met plenty of friendly people – although admittedly, no one on bikes.

We had a huge amount of admiration for the Swedish people we met on the mountains. Everyone was curious about our bikes but they were universally supportive of our venture – unlike the majority of people at home. They were often bemused – having only really thought of travelling on skis – but overall they thought it was a fantastic idea for an adventure. 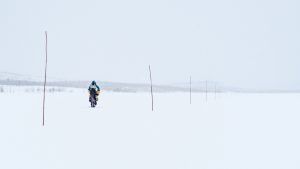 Planning for expeditions like this is so important – failure to keep warm or safe when you’re in temperatures of -20°C can have catastrophic consequences. Staying dry and staying well fed are both pretty key to staying comfortable in cold conditions, and luckily the climate was significantly drier than the winters we’re used to. That made it easier to keep the insulation in our clothes and sleeping bags dry and effective, although we did have to sleep inside ‘vapour barrier’ liners in our sleeping bags, which prevent water vapour produced by your body from travelling into the down insulation, condensing and then freezing. We did the same with barrier socks to prevent our boots from getting wet from sweaty feet. We made sure to eat well too — although food is heavy, I’d rather carry the weight than the alternative. Overall, we were fairly comfortable.

The low point of every day was getting out of the sleeping bag to get the stove on (we took turns), and putting on freezing cold boots. But however much we were prepared for the cold, it really did affect us when we were out there. Possibly more than I realised it would. I expected to struggle – anyone would in -20ºC! But I didn’t expect the cold to penetrate my mentality as much as it did. Staying positive in these conditions is difficult – being cold is really hard work on the body and mind. Both Annie and I are used to Scottish winters but Swedish winters are a whole different kettle of fish. We knew we were relatively inexperienced in those kinds of conditions and that we would need to be alert to our shortcomings and willing to learn quickly. We changed the things that weren’t working for us, and soon enough we felt fairly comfortable in our limitations. We never did manage to be zen about the cold feet in the mornings though. It doesn’t matter how warm you are, put your feet in boots that have been at -20ºC all night, and they will get cold. 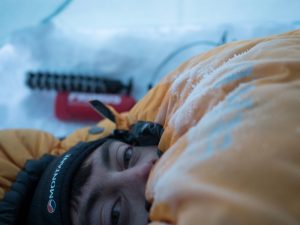 I remember digging into the snow for our first campsite, the weightless powder on the surface giving way to a firmer, packed snow. With each stroke of the shovel I felt the warmth seep out of my fingers. By the time I was tensioning the guy lines, I was frustrated, fumbling and doing everything slower than I should have been. I was irritated and irritable – just because I was cold. Once inside the tent with a warm cup of tea, I relaxed and warmed up, my bad mood now the one seeping out of me. I realised how easily the cold had got to me and I was surprised. I didn’t expect it to affect me like that.

I think that this experience – this whole expedition – proved how important mentality is during expeditions. It goes without saying that experience, preparedness and decision-making skills are crucial, but your mentality is the medium by which all those things are actually applied. A mentality of optimism and open-mindedness is probably the thing that got you there, past the doubts, uncertainties and setbacks that are part and parcel of any big trip away. It’s also my mentality and resilience that benefit the most in the aftermath: for example, coming back to smaller-scale adventures in the UK suddenly felt like a breeze with the added confidence that we gained from our experience in Sweden. It became another part of who I am, and stays with me in the mindset that I take into new challenges. If adventure is all about uncertainty, then it’s your mentality that has the power to turn that uncertainty into a positive or a negative. Equipment and knowledge might keep you safe in a given situation, but it’s your mentality that can allow you to enjoy being there in the first place. 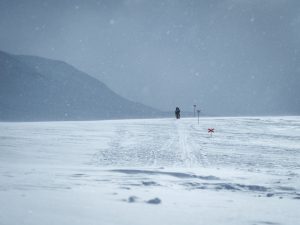 Expeditions are a big commitment. I think that the most important thing is to be honest with yourself about your reasons for making a trip. If it’s to try and prove something, to be the first, the fastest or the greatest, then the chances of fulfilment instantly become slim. I don’t think a successful expedition is too different to a successful day anywhere else, the key is to be honest: be honest with each other, be realistic, and remember that it’s meant to be fun. There are so many benefits to expeditions of all shapes and sizes too – something that I try to communicate to the kids I meet at work. Find something that catches your imagination. Once the spark is there, the rest will fall into place with a little determination and imagination, one way or another. There are ups and downs to any expedition, but it is always, always worth it in the end. 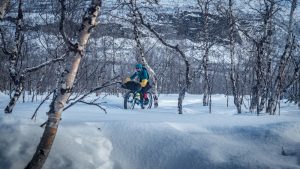 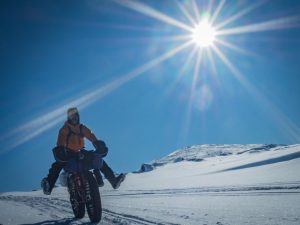