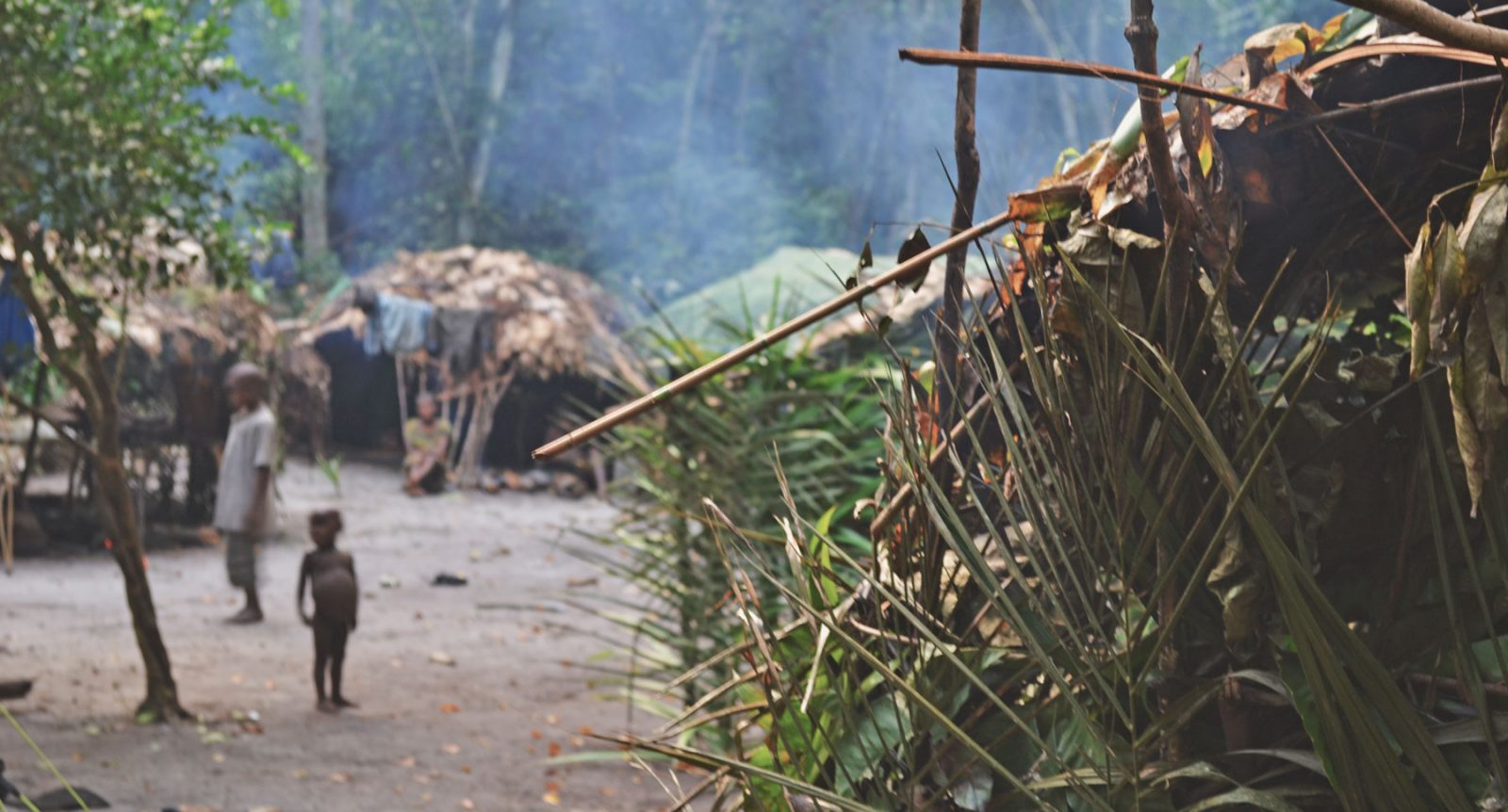 THE TRIBE, THE RAINFOREST AND ME

15 months living deep within the Congo

From above, the Congolese jungle appears an inhospitable tangle of vegetation. Yet, over years of isolation, communities of hunter-gatherers have maintained a harmonious existence within the forest. Collectively known as ‘pygmies’, these remote tribes have captured the imagination of anthropologists, few of whom have gone to extreme lengths to study them since their discovery in the 18th century.

Fascinated by the different ways Europeans and Central Africans interact with their environments, French Cameroonian Camille Oloa Biloa focussed years of study in the region. With an affinity for music, her curiosity was piqued by the musical rituals fundamental to the pygmy’s way of life, and in 2013 she left to live with an isolated community in the Congo for 15 months to carry out her PhD research. We caught up with her to discover the challenges and rewards of her time spent with the forest community. 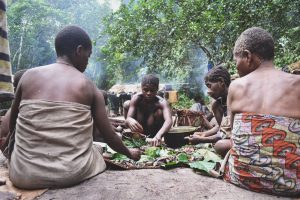 What drew you to studying the Mbendjele tribe in particular?

Well, I didn’t plan to study the Mbendjele when I started. After completing field trips in south-west Cameroon with the Bagyéli tribe and my Masters degree, I began my PhD research in the equatorial region of the Democratic Republic of Congo (DRC).

The mining activities in DRC and the many forces destroying the environment and moving populations of people made it difficult to work in Central Africa. There are many places which are hard to access or to study at all; it’s either too dangerous or simply not relevant anymore because the forest is just gone or it’s empty. Sadly, there are not many [pygmy] groups left who are able to live as they want to in the forest.

Because I was interested in music, and the way they use music to regulate their political life, I needed to see a group which was still practicing their traditional rituals. The Mbendjele are one of the only ones who can do this, because they still have the forest environment around them in which to live.

Did you have much experience of life in the jungle before joining the tribe?

Only from my field trips in Cameroon in 2009, and the five months in DRC. It wasn’t as hard as I expected. It’s a tough life, but I enjoy the forest.

Were you apprehensive about immersing yourself into such a basic way of life for such a large duration of time?

My big, big concern was the language, because it’s difficult to learn to speak a language when you have no dictionary and no language in common. Sometimes you can get paranoid when you don’t understand what people are saying and it’s easy to feel people are talking about you when more often than not that isn’t the case – and this works both ways.

How did you find integration with the community, were they receptive to your presence?

They were very receptive. As a marginalised community, they’re quite happy to meet someone who’s generally interested in them, and who gives value to what they know. So just by being interested and learning from them, they quickly appreciated me as part of the group.

Also, I didn’t pay people to do jobs for me, as the Europeans they’d met so far had. The fact I went to go and fetch my own firewood and my own water, and tried to live as simply as they do, it demonstrated I wanted to participate and didn’t despise the way they lived.

Did you make any deeper connections with particular people within the tribe?

Yes, I did, I was very close to the family I lived with. This included mum, dad and seven children, grandmother, aunt and nephew and also the enlarged family; brothers, sisters, cousins etc. The mother of the family, who was perhaps my closest friend, sadly passed away two years ago. I had some other girlfriends who I used to go and gather food with, but as there is no network coverage, it’s not like I can stay in touch so it’s difficult to keep track of things. 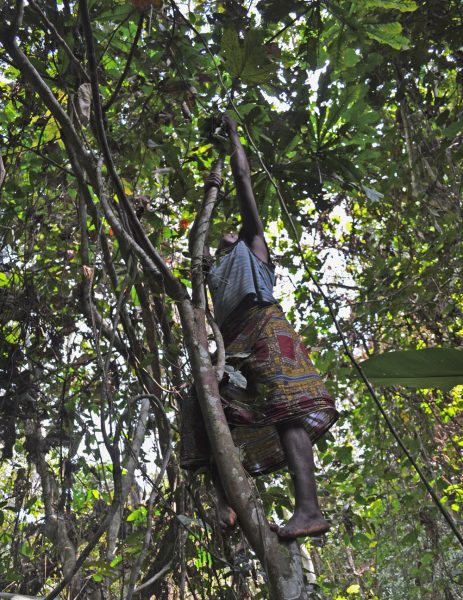 What was it like to return to the Mbendjele to capture the practice of net-hunting for the BBC’s Earth’s Natural Wonders?

It was lovely to get back and see everyone and hear everyone’s news. As with TV shoots, I was working from 10 to 5 everyday, so there wasn’t much time to do much much else, but it was good to catch up with everyone for a short while.

What did your day-to-day routine in the forest involve?

The basics; fishing, firewood, fetching water, gathering white yams and looking for honey. I didn’t personally go up the tree’s to collect [the honey] – the bees are quite fierce!

What does their diet consist of?

Mostly white yams, edible leaves and white animals including antelopes, porcupines, crocodiles and monkeys and fish. All sorts of nuts too, depending on the season.

Was there anything you experienced your research hadn’t prepared you for?

There are many things you can’t prepare for as it’s a personal journey, and you never quite know how you’ll react. I didn’t expect to give away intimacy. Socially, the Pygmies live in a very tight knit community and they don’t value solitude as we do. Our need for time to ourselves, to be on our own on a regular basis, they don’t have this need. To them, if you are sitting on your own it must be because you’re depressed or you’ve got a problem. So I simply couldn’t be on my own otherwise they would worry so much about me! I found it hard to be with people all the time, and not having time to myself without them coming over to see if I was alright was difficult at times. 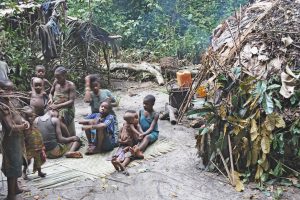 How did the time spent living with the Mbendjele aid your study?

It was necessary, because it’s the only way you can understand why people do what they do. If I didn’t fully understand the consequences of living this way, I wouldn’t know why they make these choices. And, it’s was so easy to let my body collect the data. I would do the same jobs and when my back was broken, I understood why they only do that activity from time-to-time – because it’s exhausting! You can only appreciate these efforts if you’re doing it too.

And, they don’t verbalise much. They don’t explain everything they do so it’s only through experience and looking at people’s actions I could understand. I couldn’t have done this study without staying there for a year. Music is something you have to practice too, and so is studying the effect of music on emotions and the body and the construction of the community and everything, so it was really a study based on experience over time.

What was the lasting effect on you once you returned to your own life?

It changed my perceptions of human beings. Now, I can easily dissociate what is European and what is human. We’re not born greedy, and we are not born with the desire to control the rest of the world. Because often in our society we’re presented with the idea it’s normal and natural, and accept this is just the way we are; but it’s not a natural tendency, it’s just a cultural construction. So to see a culture which was so different from my own, I gained a better understanding of what qualities are left once you strip out all the differences, and you’re just a human being after all.

For those who are curious on the subjects of anthropology and ethnomusicology, Camille’s PhD thesis ‘The egalitarian body’ is published online for public reading.

Secret Compass have worked closely with Camille during several projects, and in July we will be heading back out to the Congo on a cultural immersion expedition with Mbendjele – a unique opportunity which would have not have been possible without her kindness, expertise and support.