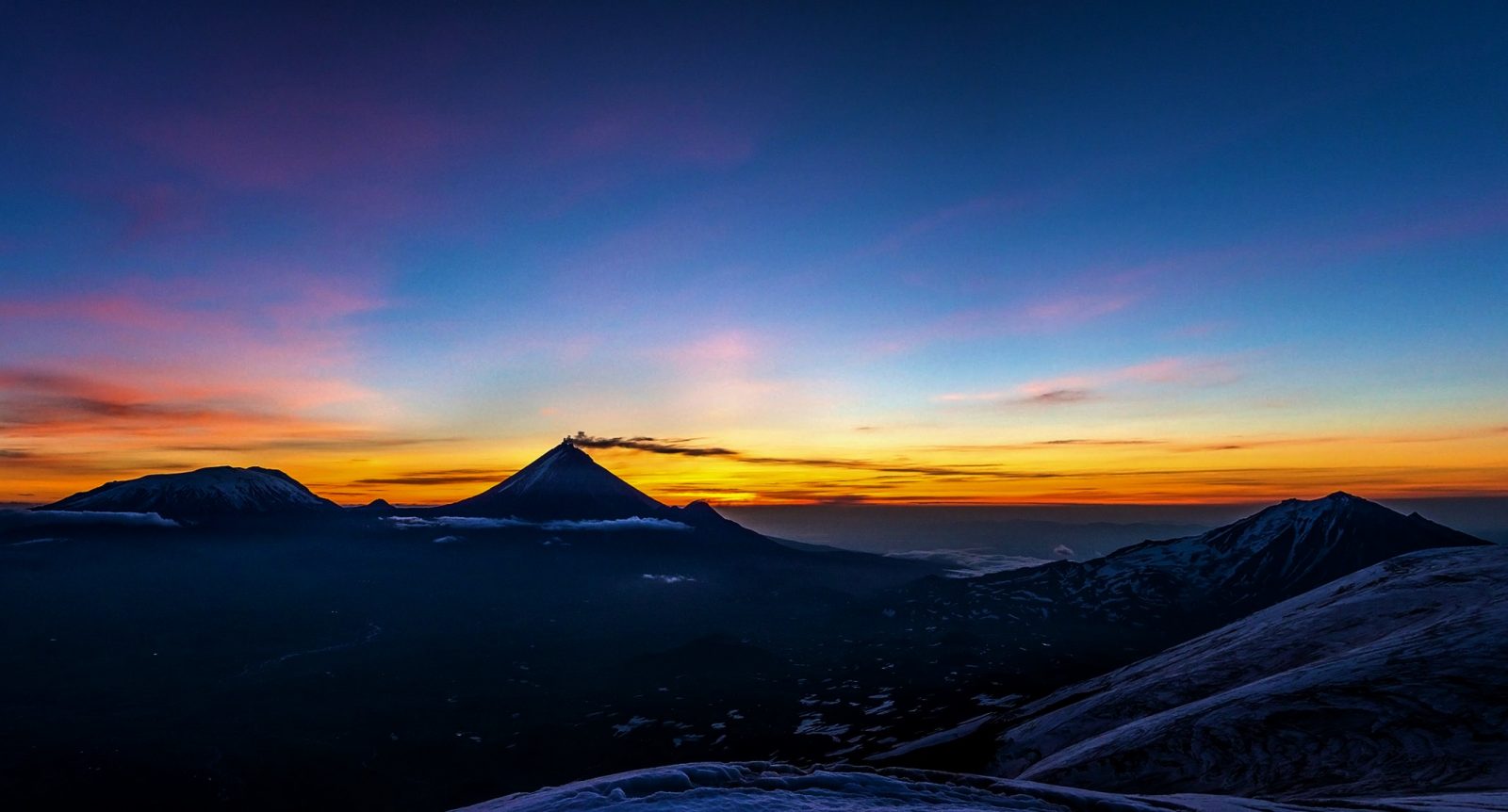 ONE MORE RUN TURNED THIS SKI GUIDE’S LIFE UPSIDE DOWN

spinal trauma on the Kamchatka Peninsula

Pushing the envelope in the outdoors is a privilege held dear by those who do so. The labyrinth posed by perpetually evolving conditions is what makes adventure sports so inherently risky and simultaneously so attractive. Inevitably, despite the best preparation, luck has a tendency to eventually run dry and when it does, the effects can be devastating.

One of the lucky few to call the wilderness of the sparse Russian Far East home, Viktor Zakharin has been our in-country guide for several years, co-leading Secret Compass expeditions on the Kamchatka Peninsula. Naturally, with a home in the mountains, surrounded by ocean, he’s made it his playground, be it backcountry skiing, finding waves on the endless miles of untouched coastline, or hiking up the faces of Eurasia’s highest active volcanoes. But earlier this year, an unexpected turn of fate turned his life upside down.

This is his story. 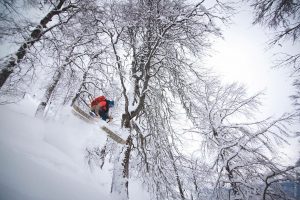 So about ten weeks ago you had a pretty serious accident in the mountains, can you explain what and how it happened?

At the end of March, me and two of my colleagues were guiding a heli-skiing trip in my home mountains of Kamchatka. Conditions were pretty strange, we’d had a thin covering of fresh snow over a hard icy layer. Nothing special or dangerous, but everyone was aware of it. We did a few runs in the area and were having fun but I was ready to move on. We decided to do one more run. This final run changed my life completely.

It was a pretty gentle slope, one of the easiest we normally do but then nothing happens on the really dangerous runs. I’d made it to the runout when I hit something hard underneath the thin layer of snow. I’m not sure if it was ice or rocks, but I fell onto my left side and I lost consciousness.

“I was ready to move on. But we decided to do one more run. This final run changed my life completely.”

The first thing I thought when I came back was, I’m pretty much laying flat at the bottom of the mountain, and it’s going to be easier for helicopter pilots to get me out of there. Lucky me! My colleagues gave me some strong painkillers so I could stay awake and help them co-ordinate the rescue with the [helicopter] pilots, as the rest of the team were English speaking. The guys did a great job fixing me on the spinal board to protect me from further damage. So after being crazy unlucky, I was really lucky that these guys, guides, and pilots had my back. 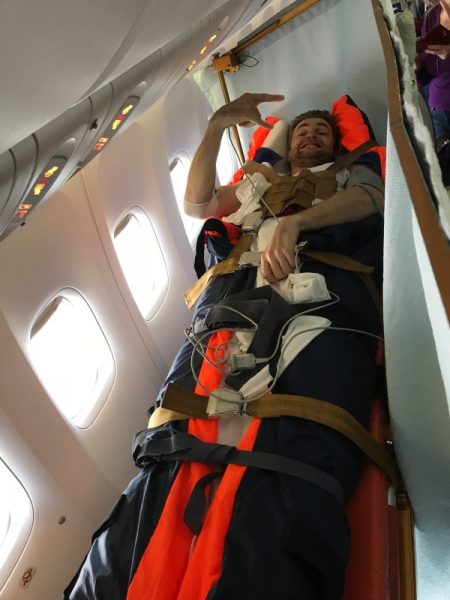 We flew out of there to the helicopter base from where we drove by ambulance to the hospital, the whole way I was blacking-out.

At the hospital, waiting for surgery, it felt like my ski boots were way too tight so I asked my girlfriend Katya to release the buckles. That was the first moment I realised I couldn’t feel my legs. I didn’t have boots on, they’d taken them off in the helicopter.

So now 10 weeks down the line, what’s the resulting injury?

I’ve got severe spine trauma, with multiple broken vertebrae between my neck and chest. I fractured my T10, explosive fracture of T8, and comminuted fracture of T12. Those fragments then damaged the spinal cord. I also broke 9 ribs and punctured a lung.

So the main problem is my spinal cord, bones are bones, they’ll fix themselves over time, but the nerves are much harder to fix.

“That was the first moment I realised I couldn’t feel my legs. I didn’t have boots on, they’d taken them off in the helicopter.”

The spinal cord injury led to paraparesis, which is the partial paralysis of both legs due to disrupted nerve signals from the brain to the muscles. It could be identical on both legs, or like I have, one leg is better than the other. 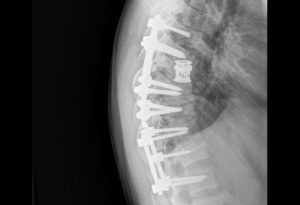 What surgery have you had?

I actually had two. The first one I had straight away in Kamchatka at the local hospital. It was very important to do it as soon as possible. The less time the spine is compressed, the less damage it causes. First of all, surgeons fixed the most life-threatening issues like the punctured lung, internal bleeding, decompressed the spinal cord and attached some titanium.

Then we flew to Moscow, to one of the most famous hospitals for spinal trauma. They changed the construction fixing the spine, made it longer and put one more for the lower section, so I am able to start my recovery sooner without the fear of something else breaking. Now I have two independent constructions consisting of 13 titanium screws and four rods connecting them.

After that, they put me in an induced coma for three days until I could breathe for myself. 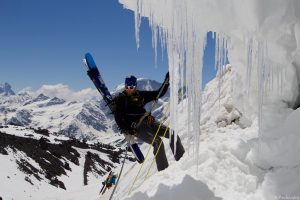 Then I moved to a rehabilitation clinic, it’s a nice place with good care and the staff really know their stuff. When I came I was only laying on a bed, hardly able to sit up straight, and depending on everyone around me for everything. Even turning onto my side in bed I’d need someone’s help. Now I’ve spent two months here. We work a lot to rebuild the muscles on my back, stretch my body, try to wake my legs up and help me be more independent.

It changes from week to week, but in general I do physio every day except weekends. One day legs, one day core which always starts with stretching. The core day is a special exercise to build strength for everyday life and build the muscles to reduce the impact on the spine. Leg day focused more on walking or switching on the muscles I could use in legs.

“For sure there are highs and lows but you have to work on this. Staying positive helps with a daily routine, increases your workout efficiency and the doctors say it speeds up the healing.”

Also, I work with some doctors in alternative medicine. I don’t have a clue how it works, but I’ve been recommended from some close friends who have had impressive results of this type of therapy. So trying to take the best from both worlds. 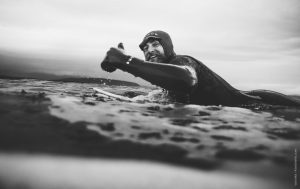 For most people, it’s hard to imagine how learning to walk again feels. Can you describe it?

Even for me, it’s still really hard. You know how it should be, you know which muscles you should use for one movement or another, but your legs don’t listen to you. I have full leg orthopaedic braces which let me train walking, I also use a walker like the one you could see the grannies using. It hardly looks like walking, but it’s the first step. Last week my right leg was showing improvement, so I could put away the top section of the right brace, and now it looks more like walking at least for the right leg.

Now the biggest distance walking for me is around 100 meters in 40 minutes, so I could probably start competing with snails and turtles.

So although, you’re still in Russia, Moscow is about as far as you could be from home, how are you finding that right now?

Yes, you’re right, it’s far, but it’s not the biggest issue. For now, I’m a wheelchair rider, which limits where I can live. My hometown is situated on hilly terrain lacking good roads, sidewalks, elevators and all the things you start to depend on. So I should really improve my walking abilities before moving home. 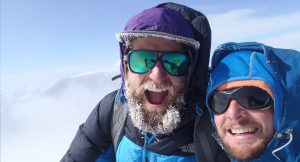 From the video you put together, your spirits seem incredibly high, how have you managed to stay positive?

How often do you take pictures of yourself with a sad face? I’m just kidding. Seriously though it’s really important at times, good mood and positive thinking is the only thing you can do.

For sure there are highs and lows but you have to work on this. Staying positive helps with a daily routine, increases your workout efficiency and the doctors say it speeds up the healing.

Friends are the key. From day one, I’ve been surrounded by my friends, family, and my girlfriend Katya all the time and it really means a lot to me. Wherever I’ve been, Kamchatka, different hospitals and rehabs in Moscow, I was always surrounded by friends, helping me, joking, bringing coffee or pizza or whatever. I’ve heard a lot of stories from people in similar situations, but most of them have sad stories of losing almost all their friends and that’s really sad. I couldn’t even imagine where I’d be without them.

And it’s a huge question I know, but when do you hope to get back out on the hill?

It’s really hard to answer. The reality is unpredictable and no one, even doctors, can answer this right now. With all the progress and new technology, it’s still impossible to know how things will go. The only way is to do everything you can and stay positive.

* While Viktor is making some great progress with his rehabilitation, he still has a long way to go before he’ll be back out in the mountains with some huge medical expenses in front of him. If you’re interested in how you can help Viktor, please do get in touch.