In 2016 Secret Compass expedition leader Paul Taylor joined Team Rubicon on Operation Trogon in Haiti, working to assist those affected by the most powerful Caribbean hurricane in several years. A disaster relief charity formed by ex-Servicemen and women and started in the US, this was the first time that the Team Rubicon volunteers from UK led a deployment to a disaster.

On the 4th October 2016 the south of Haiti was hit by the full force of Hurricane Matthew. This category four hurricane brought winds of up to 107 mph that ripped roofs from buildings, destroyed bridges that connected communities and caused huge devastation in an area that was still recovering from the earthquake of 2010 and the ensuing cholera epidemic brought by UN peacekeepers. Life in Haiti is always hard but things were about to get a whole lot tougher.

Team Rubicon had been assessing the situation and with Hurricane Matthew now heading towards Florida, and likely to tie up Team Rubicon USA it was decided that Team Rubicon UK would lead their first international response and so I found myself heading towards Heathrow and leaving a maelstrom of personal administration in my wake so I could meet up with the other two members of our reconnaissance team and get ourselves in country so we could determine the nature of our response and the composition of our follow up forces. Dan was the Operations Manager who had been out responding to the earthquake in 2010 and Shaun was an experienced medic so between us I felt we were in a good position to start conducting needs assessments and feeding information back to the UK.

After a long flight we were met in Port au Prince by Will McNulty, one of the co founders of Team Rubicon. There is some symmetry here as in 2010 Will and a USMC veteran Jake Wood brought a team of medics and first responders from the Dominican Republic across the Artibonite river (hence the name Team Rubicon) and in to Haiti. The situation in Port au Prince was incredibly volitile but they found that with their experience of operating in hostile environments in the military they were not only able to bring ‘calm to the chaos’ but they and the team felt a real sense of purpose and a disaster response organisation was formed that helped veterans whilst helping other people (it would be worth noting TR is not entirely made up of veterans although they are without doubt in the majority).

The next morning saw us shuttled to the airport where we were squeezed into the back of a light aircraft and flown to Les Cayes on the southern coast where we would commence our recce. We had a photographer with us who wanted to overfly the area to take pictures and as flew low along the coast the only words that would accurately describe the scene would be total devastation and as an old soldier it looked like the area had been on the receiving end of some intense carpet bombing. Once in Les Cayes we met up with Willys who was the director of ‘Hope for Haiti’, an American charity we would be working with and he described how the hurricane had affected the local area. His team were already doing a great job, delivering food and medical supplies. The vast majority of the population are subsistence farmers who had now lost their crops and had nothing to feed their families and Cholera, which was already in some areas was spreading so oral rehydration packets and water purification systems were in demand.

Willys was keen to take us to Morency on the coast which was one of the worst affected areas. As we drove into the village it again looked like a 1000 lb bomb had been dropped on it as there were trees strewn across the tracks the villagers used to gain access to their wells and in some cases across the tops of their houses.

One of the great things about Team Rubicon is the flexibility of its capability and response so I immediately made a note to request for some chainsaw teams to be flown in at the earliest opportunity. Willys showed us the remains of the school and again this was noted as a task for the first wave of volunteers. This brought our recce to an end and as Dan headed back to the UK  I was left to command the first wave of volunteers who would arrive and commence the work.

Nine volunteers arrived in country from the UK and a chainsaw operator came down from Canada (Team Rubicon is spreading around the world and is now established in the USA, UK, Canada, Australia and Norway) so we now started to get ourselves to the locations we had recce’d and start doing some good. Our motley crew came from across the UK but we were very fortunate to have Neil on the team. An old soldier from the Welsh valleys, he was now a construction specialist (I like to think good builder) and was in his element demanding materials and coming up with plans to construct the classrooms in Ravine Sable.

The temperature was a constant 32 degrees Celsius so hydration and preventing exhaustion were always on my mind as I put a team to work that had no opportunity to acclimatise and for that reason we started in Ravine before moving down to the big job in Morency.  I’ve already mentioned how the locals in Ravine Sable had been working together but what was particularly pleasing was to see how they interacted with our team and before long they were running the show with us providing advice (through Neil) and materials. As this job approached completion, I took Neil down to Morency to allow him to come up with a plan and as I walked him around the school and passed on what I’d passed on the recce he asked me to stop so he could sit down and take a moment to gather his thoughts. I wouldn’t like to think I’m devoid of any emotion but scenes like this certainly hit you harder when you witness them for the first time.

It was now time for Neil to put his plan into action and as work commenced on the school, Evan and his chainsaw team cleared the routes to the wells and then worked on people’s homes in a priority agreed with by the village elders. I was now able to get out with Willys to key up some tasks for once the school was completed and for the next wave of volunteers (volunteers generally deploy for two weeks at a time which is a good balance and allows employers to release their people and for them to be put to work and potentially operate in austere conditions).

Even more so than in Ravine Sable there was a sense that in Morency, we had really empowered the local community and as well as working together on the school we played football with the kids and cooled off after work with a quick swim in the Caribbean Sea. One can only imagine what it must have been like to have been huddled together in one of these small houses as 100 mph winds ripped around, the roof disappears and trees are crashing down all around you. I thought about this as I was playing football with some kids and as the ball crashed off a wall with a loud bang a young boy dropped to the floor with his hands over his ears.

My time in Haiti was coming to an end as having handed over to the new incident commander Shaun and I only just made it back to Port au Prince as heavy rains had washed out many of the roads in the south of the country which meant supplies for the school had to be taken in by boat.

Shortly after my arrival back in the UK I received pictures of the completed school and during a month spent on the ground in Haiti, Team Rubicon completed two entire school rebuilds, important route clearance which allowed relief efforts to continue and facilitated the delivery of 19 tonnes of food and essential building supplies by air whilst providing medical support to those injured during the hurricane.

Whilst that’s all very impressive what always resonates with me after these operations is the impact that helping people has on the volunteers lives. For many this was their first exposure to an environment of this nature and to listen to them talking in the evening about the positive effect it was having on their lives was hugely rewarding and evidence that the Team Rubicon approach of helping yourself by helping others is in every sense a win – win. 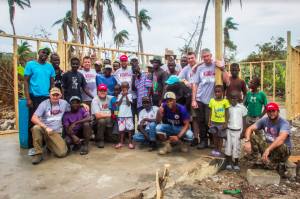