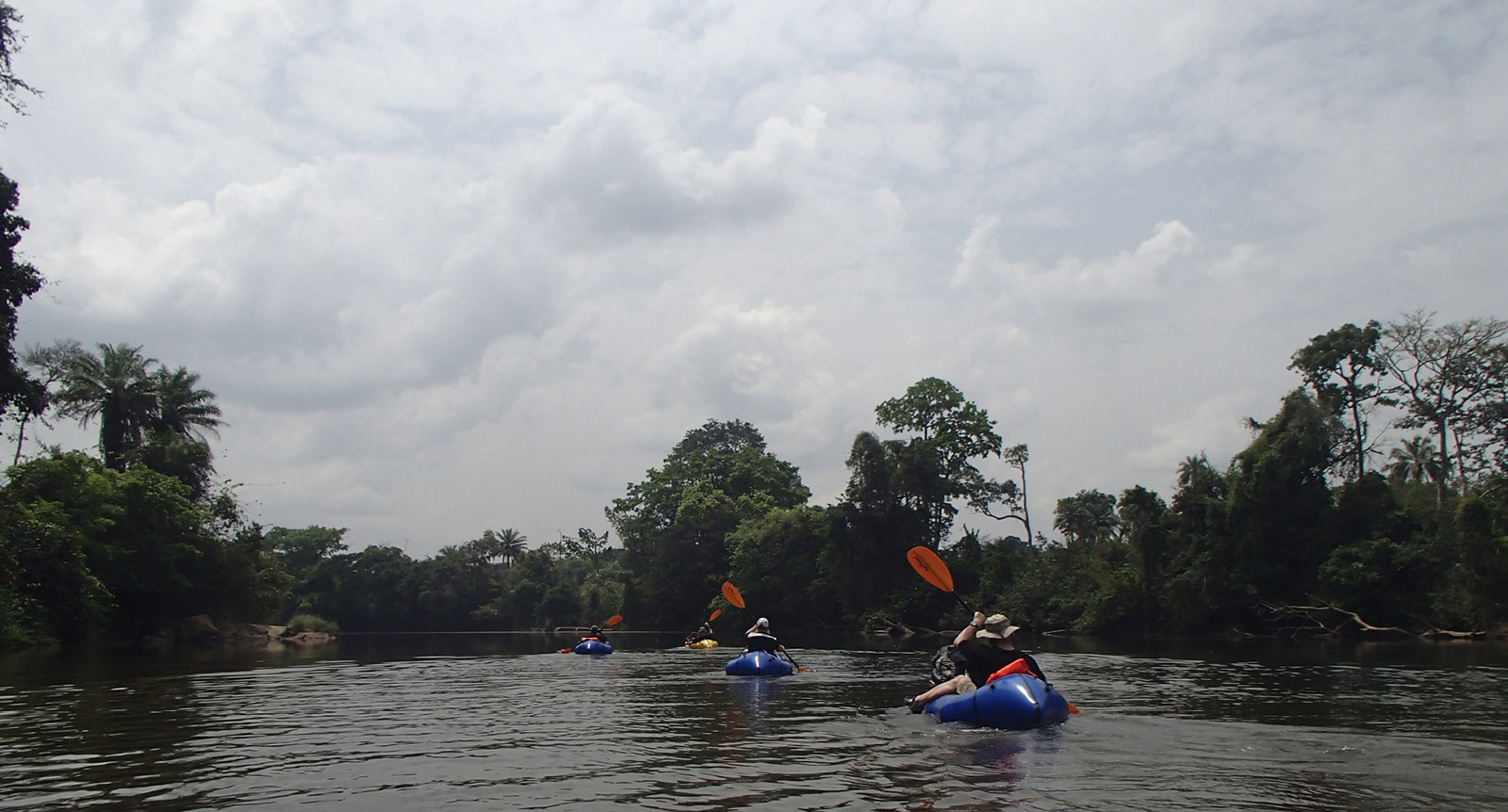 DESCENT OF THE MOA

Paul Taylor has led several Secret Compass expeditions to descend Sierra Leone’s Moa river by packraft. Here, he talks about his experiences of this fascinating African nation, the river conditions, and the cultures, wildlife and adventures he and his teams have encountered on the journey.

Like many others I suppose, my ideas about Sierra Leone before my first visit were based mainly around child soldiers, blood diamonds and the horrors synonymous with a brutal civil war. I then arrived in 2006 to spend a year based in Daru, near the Liberian border. I was working for the International Military Advisory Training Team and found an incredibly beautiful country with warm and friendly people, struggling to survive in what was, at the time, the poorest country on earth.

I lived with a battalion of African soldiers on the banks of the mighty Moa river. I spent my time not only training them in the skills required of a jungle soldier, but also helping to mentor them and introduce to some (and reaffirm in others) values that had been lost during the chaos of the preceding years of bloodshed. The final months of my tour were spent trying to maintain a stable environment for the first free and fair elections Sierra Leone had seen since the war. It was a rewarding and humbling experience working with people who faced the daily challenges of ill health (malaria, typhoid, and cholera in particular) and abject poverty with stoical good humour. 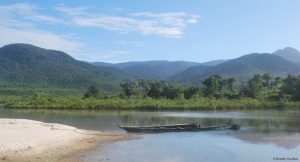 Leading expeditions for a living

Having left the Army and started to forge a career as an expedition leader, in Jan 2013 I was given the opportunity to lead an expedition back to Sierra Leone to explore the Moa river. In 2013 we were in dug-out canoes – by 2014 we had graduated onto Alpacka packrafts for their versatility in challenging terrain.

I arrived at Lunghi airport and was well prepared for all the scams and extortionately priced guides and taxi drivers who offered me safe passage to the capital. I settled for a ride on the back of a motorbike at a quarter of the asking price to take me to the ferry terminal. Lunghi is separated from Freetown by a deep-water inlet and an overcrowded and vibrant ferry took me across to Sierra Leone’s capital city. It was hard not to imagine what the sight in front of me must have looked like from the boats of the 15th-century Portuguese explorers who gave Sierra Leone (Lion Mountain) her name or from the slavers that patrolled these waters before heading west on the ‘long passage’. A few days living on the beach allowed me to carry out some pre-expedition administration before the arrival of the team and a long two-day vehicle move across the country to our start point at Mende, on the banks of the Moa river.

Mende is where the Moa flows into the country from neighbouring Guinea. On the morning of our departure a very belligerent, camouflage-wearing Guinean border official came across to our start point protesting that we didn’t have the necessary authorisation to proceed down the river and we would have to pay a fee. I have encountered lots of corruption in Africa but normally people have the decency to wait until I’m at least in their country before they try to rip me off! Needless to say we headed off in our dug-out canoes with no money having changed hands. The dug out canoes we used throughout the trip varied in both size and buoyancy. Our guide, Abu, summed things up perfectly on one precarious stretch of water which saw us all bailing water as quick as it was coming through the canoe: “The boat is not good”.

We had decided to spend some evenings camped by the river in hammocks but, when possible, we camped on the outskirts of a village to allow the Secret Compass team members to experience some Sierra Leonean culture. On entering a village the procedure was to approach the Chief, pay him our respects and then ask for his permission to camp near his village. The remoteness of our location may well have been indicated by the reaction of the Chief of the first village we stayed in. As I approached him and held out my hand to greet him, he said in a loud voice, “Ah, you are looking for your white brother. He was here in 1991 and he went that way!” indicating to a track running off into the distance. 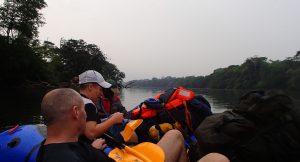 Sierra Leone’s war lasted for ten long years and there is a ‘lost generation’ of Sierra Leoneans who were either caught up in the fighting or deprived the opportunities of an education and advancement because of it. Many people are now working hard to redress this balance and our guide would be using his fee to help him go back to college. There is an acknowledgement that this should never be allowed to happen again and it was heart warming to see schools in remote parts of the jungle filled with smiling children, eager to learn.

The best method of making progress was by using the river but the presence of rapids or the unavailability of local canoes meant that at times we would have to trek along jungle tracks using a combination of local mapping and porters to take us from village to village (thus why we have moved on to flexible and easy to carry packrafts from this year onwards). It was hot, with temperatures in the early thirties. This, combined with the humidity and the claustrophobic effect of the jungle canopy, meant that we had to ensure sufficient water was being taken onboard along with regular rests in the shade. Abu had brought a cook along with him from Mende, Niazab.

Throughout the expedition she provided us with a real mix of tasty food purchased from local markets or from the villages in more remote locations. We had a plentiful supply of fish and her specialty was breakfast banana bread, all cooked on an open fire. We had purchased a tent for Abu and Niazab, but one morning one of the team noticed Niazab sleeping by the fire and Abu safely ensconced in the tent. Abu was awoken by some dulcet Australian tones and for the remainder of the trip, Niazab had a tent all to herself. 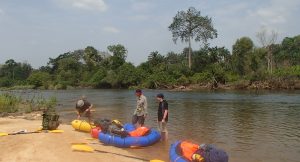 A lot of the native wildlife has either fled for its own safety or been killed for bush meat. There are efforts to bring animals back to their traditional habitats and we saw and heard many different species of monkey but no hippo that live in the Moa and are an inherent danger of river travel in Africa. There are pygmy hippos, which are very elusive, pygmy elephants, and leopard, which will all hopefully find a way of thriving in the jungles of Sierra Leone. 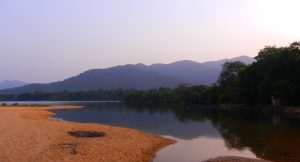