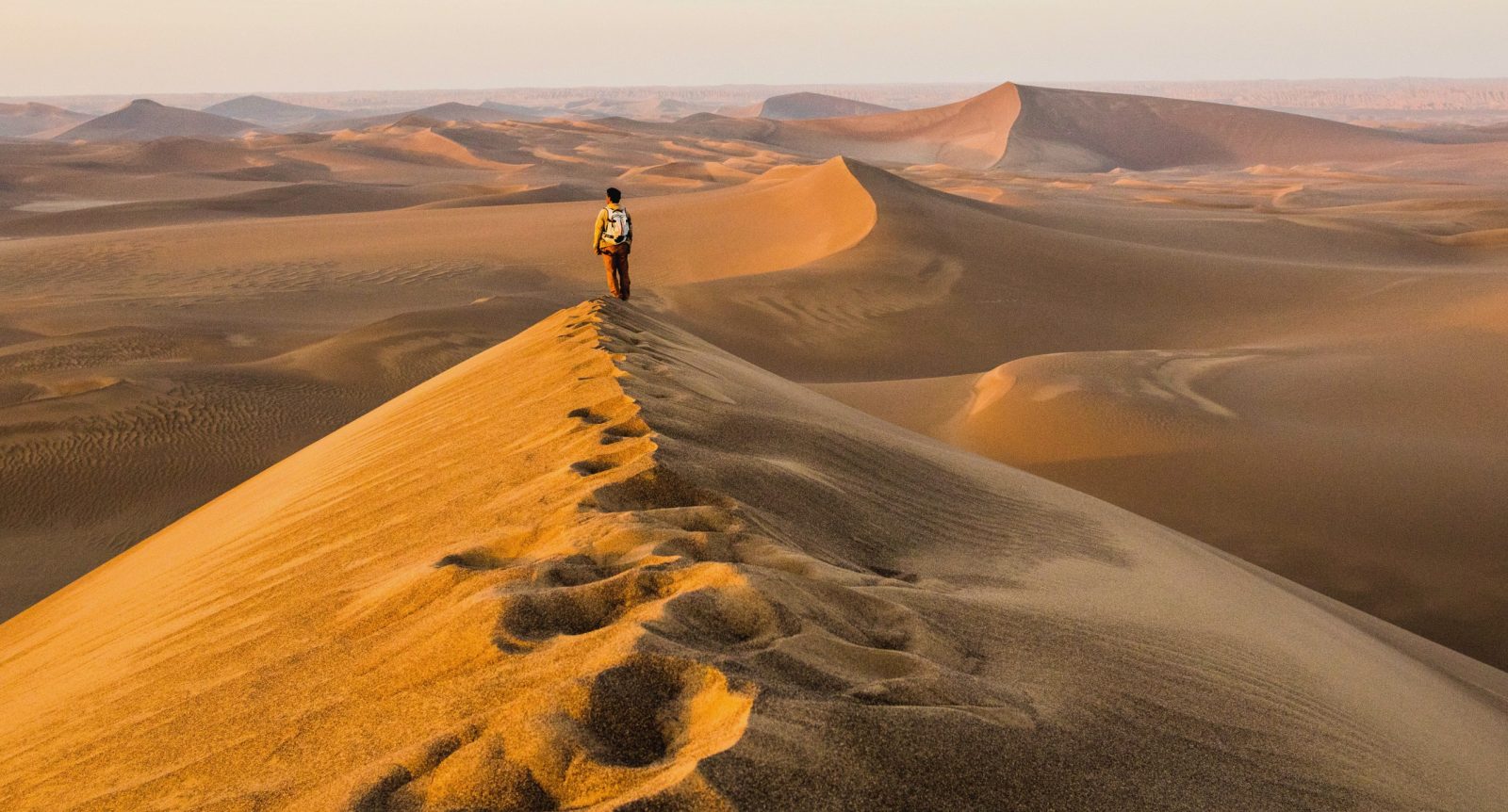 memoirs from the Lut

“We sounded like a bunch of school boys as we splashed and shouted in the pleasantly warm pool filled by a small waterfall. Nine days of trekking across a hot, dry, windy, waterless desert will do that. The sublime embrace of water felt foreign having not seen a drop of natural water since we began our trek nine days ago. Our bodies and minds revelled in the cleansing softness. Our joy exploded.”

In Iran’s east, overlapping the borders of the provinces of Kerman and Sistan and Baluchestan, sits the Lut desert. 480km long and 320km wide, it’s home to the highest recorded temperature on earth and sits at around 185m below sea level. The Persian name Dasht-e-Lut, translates broadly as plain of desolation. Its monumental sand dunes akin to the towering peaks of the Himalaya, the forged paths through its Kalut systems a throwback to the Silk Road. While the existence of primitive species in regions of the Lut are known, it remains totally uninhabited by humans and a large proportion has been labelled abiotic.

In November 2017, a team of six led by experienced expedition guide Luca Alfatti, traversed over 200km across the Dasht-e-Lut. Having reached the extraction point, in the company of new friends, 68-year-old Canadian team member John Kelly indulges himself in the deep, clean, fresh water before the team would disperse upon return to Kerman. These are John’s lasting impressions from nine days of sand stars and solitude. 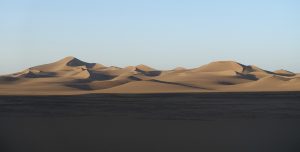 Quietness reigns supreme in the Lut. Day or night, the only sound that breaks the spell of silence is the wind. Walking across the sea of sand with the only sound being the shuffle of your boots is sublime. And then stop. Nothing. No sound. Just silence. You can almost feel your ears straining to detect just one sensory input. In the darkness of night, staring up at the stars, it feels even quieter. My mind definitely enjoyed the rest from our normal cacophony of audio and visual inputs.

Our existence in the desert was short and transitory which makes for a great analogy of human existence on Earth. All evidence of our presence in the desert was being quickly erased by the blowing sand, much like humanity’s print on the planet will be quickly erased when the human species is no more, with the possible exception of a few remnants. It will be like finding a lone camel track in the sand. 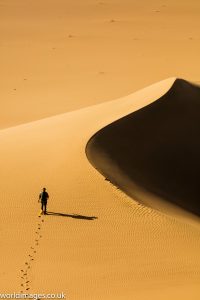 Every multi-day trek soon falls into a simple but effective routine. Ours was no different. It was however determined by two factors: the average daily distance, and the heat. Our unofficial target was about 25-30 km daily but with daily temperatures exceeding 40ºC, adjustments were made to ensure the health, safety and well being of everyone.

We rolled out of bed at about 0430, initially made easier by the full moon phase that provided beautiful conditions to pack-up. For the most part we slept under the stars. By 0530, we were having breakfast and by 0600, we were walking.

During a 30 minute break at 0900, the first order of business was to remove boots and socks to dry and cool feet and dry socks. Blisters are a common problem in desert travel. It’s impossible not to have sweaty, wet feet which is one of the main causes of blisters. Luckily, drying feet and socks, is quite easy in 40 degrees. Sand in the Lut is generally soft and pleasant to walk in and it also dries and massages the skin. 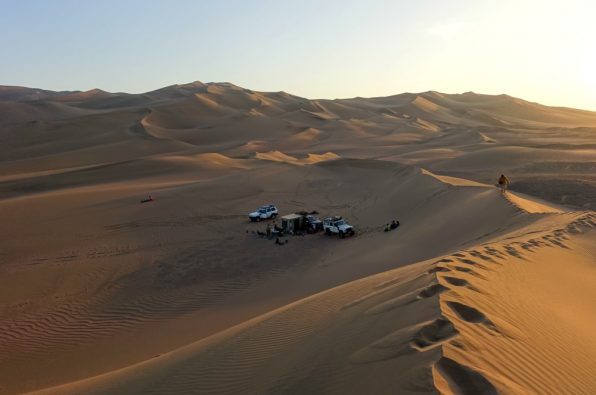 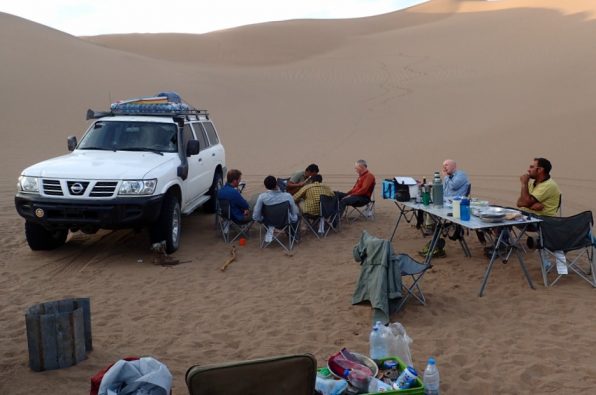 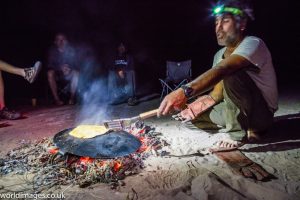 We were probably burning 4-5000 calories which is challenging to replace. 1130 marked an hour and a half to refresh and replenish over lunch allowing the heat of the day to pass. Thankfully our lunches were far more robust and nutritious than if we were carrying our own food. I was consuming at least 6-7 litres of water, electrolytes, coffee, tea and for the first time in at least 50 years Coca-Cola. Water is life sustaining but by mid-afternoon trying to force down lukewarm water is an effort.

Typically, with less than three hours of trekking left, by around 1500 we were finished for the day with about two hours before dinner to rest, rehydrate and get our sleeping arrangements sorted for the night (or administrations as the UK gents called it).

A constant reminder of the fluid and minerals I was losing was my salt stained shirt. By the end of the trek, due to heavily salt infusion, my pack straps were almost impossible to adjust. With water in short supply we didn’t have the luxury of rinsing or washing out the salt. 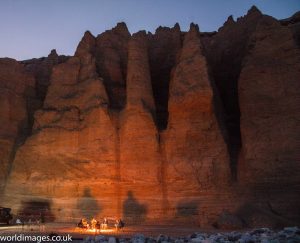 Secrets of the desert

One day shortly before lunch the support group found a dead caravan camel. Truly a surprise as this area is not known to be used by caravans because of the harsh conditions. A few artefacts had become exposed on the surface but most was still buried. This discovery could be of archaeological and historical significance. Merdad will work with officials but for now the site will remain undisclosed. The air of excitement amongst Merdad, Babak (members of the team’s local support) and their friends was palpable.

The final landscape we navigated was the mudstone landform forming the Kaluts. Over millennia the predominantly northwesterly and southeasterly winds have carved a series of parallel valleys. Having been in the Kaluts it’s obvious why they’re used by smugglers to move drugs and other contraband across Iran. It would be very difficult to see anyone unless directly overhead. Merdad and his team were constantly vigilant in watching for smugglers. An unexpected encounter was not in anyway desirable. We saw fresh evidence but no bad guys. 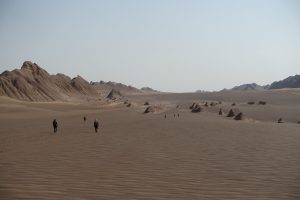 Prior to the trip, during the ride from Reagan Airport in Washington DC to the Iranian Embassy, my taxi driver was Iranian. When he learned I was picking up my visa he asked what my perception of Iran was.

“What do you mean?” I asked. “The country? The landscape? The people?”
“All of them,” he replied.

I explained how I expected the landscape the to be varied but how I would be spending most of my time in the Dasht-e Lut. How the people would be welcoming and proud of their country, like the Persian people I have met in Canada, the USA and elsewhere. Like the people my friends who have been to Iran speak about. Little different than you or I, I said. The country will likely surprise me.

He turned with a smile and said, “You will have a good time in Iran.”

Phenomenal, fascinating, challenging, and more. This adventure ranks very near the top of my favourites. The geography and landscape, the serenity, solitude and stark beauty; and the teamwork we experienced. We arrived as strangers. We left as friends. 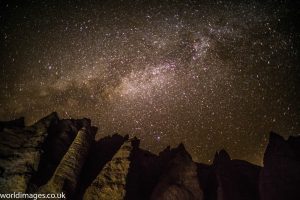 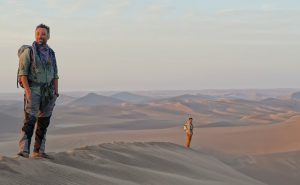 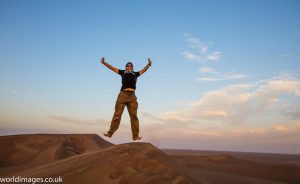 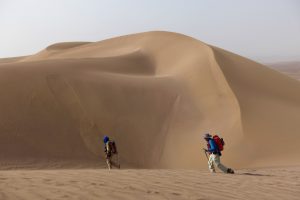 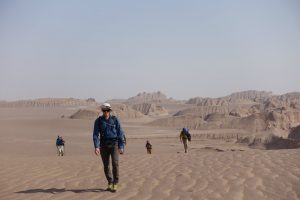 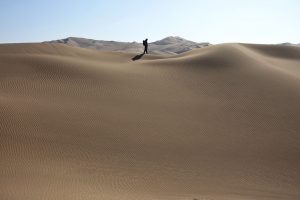 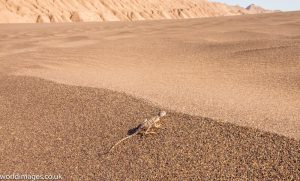 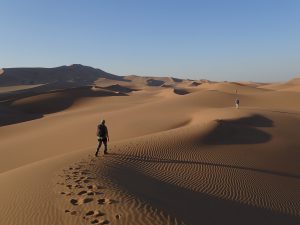 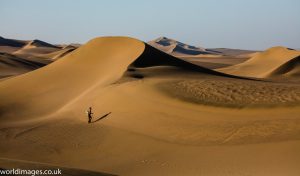 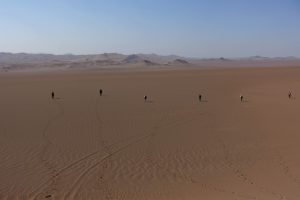 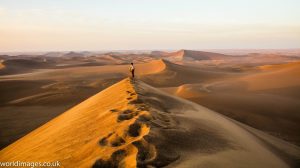 Find out more about our Lut Desert expedition, here.