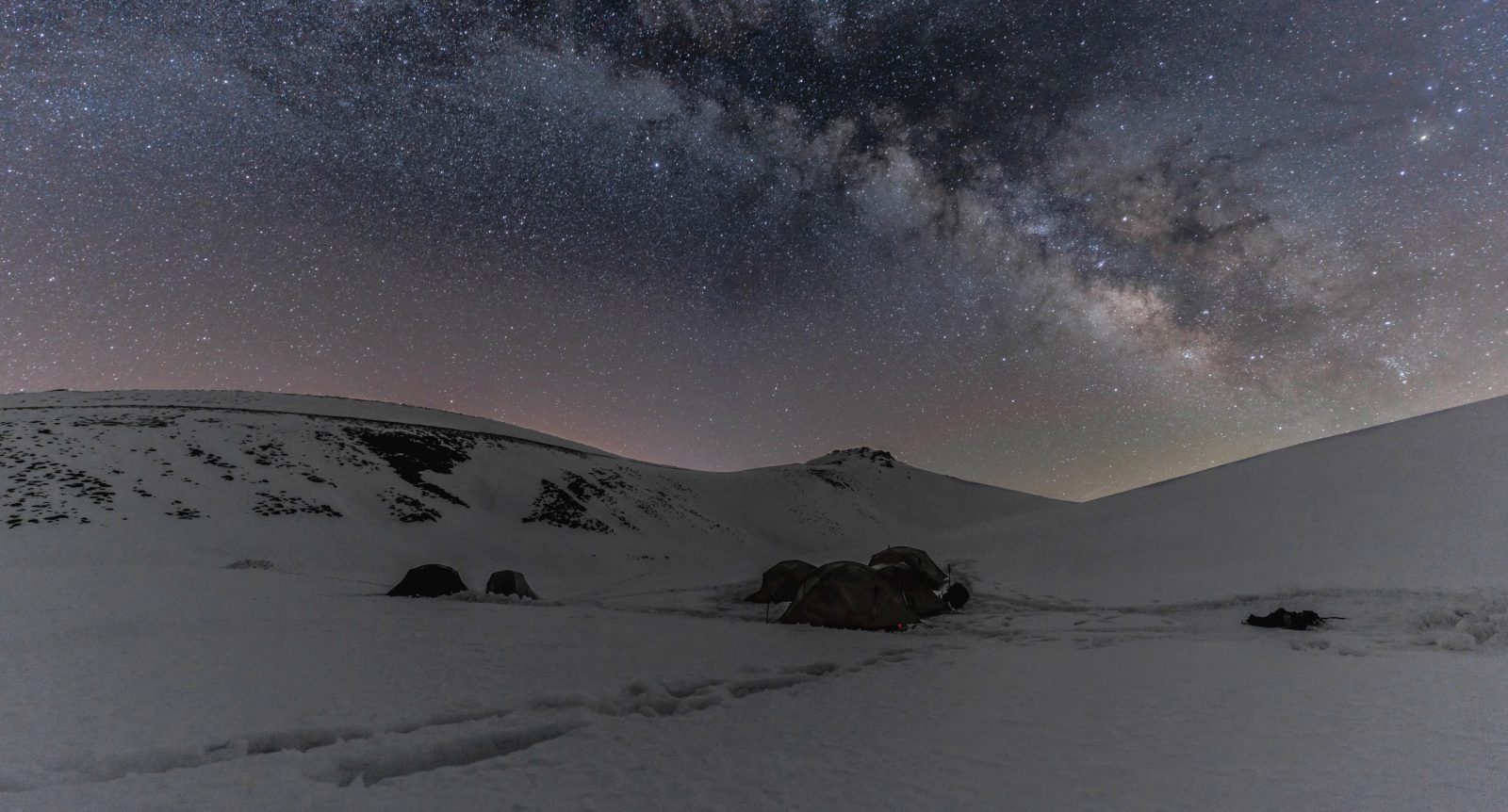 10 photos from a year of expeditions

Excuse the cliché, but what a ride 2017 turned out to be. Summits, desert traverses, river descents, bridging cultural divides, Jägermeister’s 2017 Ice Cold Gig. And that’s just the stuff we’ve got free rein to talk about.

So with the prospect of a transition into the new year upon us, and a blank adventure canvas staring right back, we thought we’d take a look back at some of our highlight moments of this year. In no particular order, below are some of our favourite shots from this year taken by our expedition teammates. 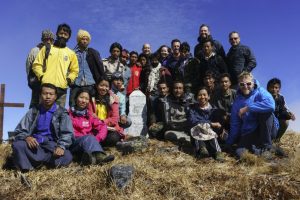 An End to the Saramati Summit Saga

Lachlan’s (bottom right, blue jacket) face in this photo says it all. Having being denied from the summit on two previous expeditions, to finally get there and with the full expedition team plus all the local porters was a moment to behold for all involved and no one more so than our expedition leader.

“It was well worth the perseverance,” he explains. “Having been to this region twice before I had more of an idea what to expect than the team but it was still just as enchanting as the first time; spending time in the company of the Makuri Naga tribe, enjoying their warm hospitality and climbing their mountain was an absolute privilege and this year the weather conditions were in our favour, finally allowing us to push it out to the summit.” 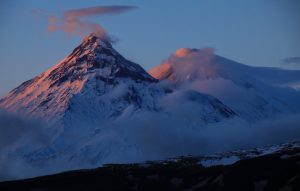 By all accounts, this year’s Kamchatka team faced some tough weather. But between thick blankets of fog, breaks in the cloud gave way to postcard perfect scenes before peaks were again shrouded in dense cloud as fast as they appeared.

“When the cloud cleared and we could see where we were, we’d see an erupting volcano in the distance and a couple more smoking away behind you and I’m like ‘wow, this is amazing, Kamchatka is beautiful’,” recalls 2017 team member Cheryl Hindle. 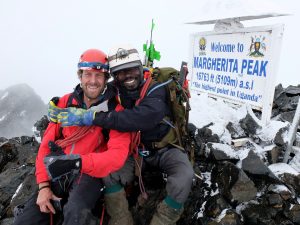 On the border between the Democratic Republic of the Congo and Uganda sits Mt Stanley, the highest mountain in both countries and the third tallest in Africa. In September we helped Martin Fletcher, a journalist from the Financial Times reach its summit. Despite the inevitable adversity faced with exceeding 5000m for the first time, safe to say it was worth the hardships.

“The temperature dropped. The air thinned. We stopped often to recover our breath, and at times it struck me we were engaged in a particularly perverse form of enjoyment.” 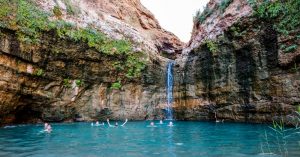 The Joy of Water

Those who have joined us on desert crossings will know this feeling only too well. Having been denied for so long, the eventual sight of water will do strange things to man.

“We sounded like a bunch of school boys as we splashed and shouted in the pleasantly warm pool,” recalls 2017 Lut desert expedition team member John Kelly from Canada. “Nine days of trekking across a hot, dry, windy, waterless desert will do that. The sublime embrace of water felt foreign having not seen a drop of natural water since we began our trek nine days ago. Our bodies and minds revelled in the cleansing softness. Our joy exploded.” 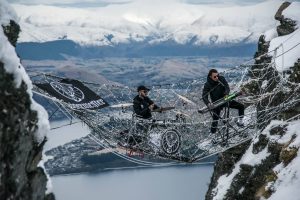 “Logistically, this year’s Ice Cold Gig presented colossal challenges,” tells Operations Director at Secret Compass, Tom McShane. “We needed to create a stage that would hang from a mountain peak in an inhospitable environment and also ensure that all equipment was in place to deliver and capture the performance. Luckily, we revel in these challenges!”

Behind the scenes, here.
More from Secret Compass Brands. 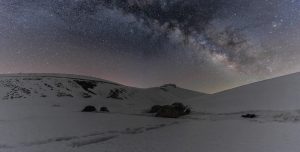 That ridiculous starlight canopy doesn’t really need words does it? But we’re going to give it a go. As April’s Kurdistan team unzipped their tents at high camp to start their campaign for Mt. Halgurd’s summit, this is what greeted them. And yes, they reached the top!

“We made our way to the base of the slope before sunrise, walking under a perfect starry sky for about 90 minutes,” recalls 48-year-old Swiss neurologist, and Kurdistan 2017 expedition team member Martin Hefti. “The moment we reached the long, steep slope of snow and ice that leads to the summit was absolutely perfect.” 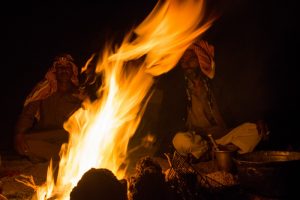 As anyone who has joined our Sinai expedition will testify, waking under the stars in a farwa to freshly fire-roasted coffee is an expedition defining morning ritual. One we all wish we could introduce to our daily lives.

“Being ground in the brass mortar and pestle, the coffee was our alarm clock,” tells 2017 team mate Mark Soares who snapped this image of Bedouin guides Nasser and Musallem preparing the team for the day ahead. 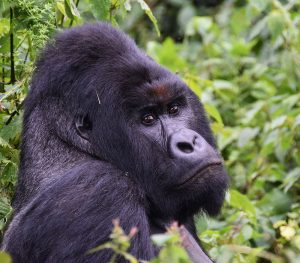 Hanging Out with Mountain Gorillas in DRC

Getting this close to the mountain Gorillas of Virunga National Park will never fail to blow minds and this year was, of course, no exception. In the summer of 2017, the expedition was treated to a particularly intimate encounter with some of the locals. 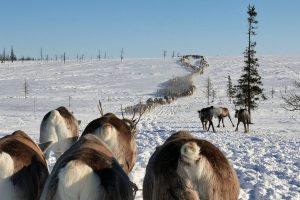 An expedition is full of unknowns, it’s partly what fuels our obsession. For this year’s expedition team, embedded with the Nenets in the Yamal Peninsula, the weather proved their biggest foe.

“As we raced the daylight to reach an island in the middle of the river, skies quickly turned and we found ourselves battling a dark, windy snowstorm.”

Here is a shot from finer weather courtesy of teammate Rebecca DeBritt. 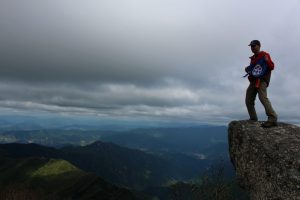 One of the reasons we feel so privileged to take teams to some of the world’s hard to reach destinations is for moments like this. In a country so commonly associated with negative press, it’s fantastic to break free from the restrictions of the cities and into the wilderness of which very few have any real knowledge.