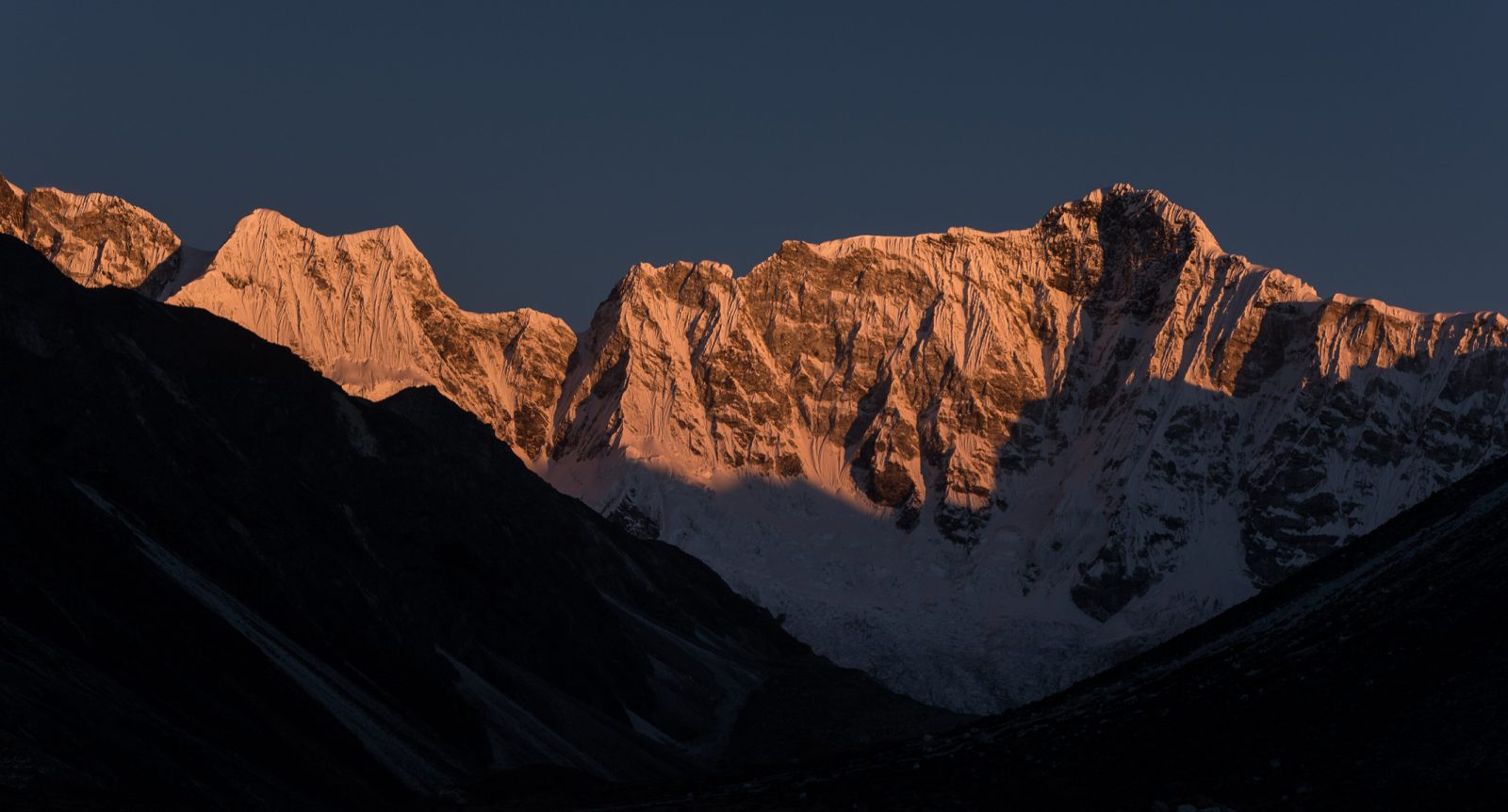 THE PRIVILEGE OF NAMING MOUNTAINS

how to name an unclaimed peak

For many it’s the ultimate goal in mountaineering. At the very least, claiming a first ascent provides a minimum of a lifetime worth of bragging and – if you can bear the bureaucracy – potential naming rights.

With the plight of Conrad Anker and David Lama in mind (below), it’s fair to assume first ascents are best left to the elite athletes of this world regardless of naming rights. But that’s not 100% true. Now, we’re not suggesting attempting a technical ascent without a back-catalogue of experience and knowledge is a good idea, oh no, but claiming an unnamed, unclimbed peak for yourself could be more attainable than you think.

In 2016, a remote and previously unnamed mountain in western Mongolia was the focus of a Secret Compass first ascents expedition. The 3,952m summit, located in the Altai mountains of Siilkhem National Park, was reached on 13 June. Upon the expedition’s return, along with our in-country partners, team mates submitted the request to name the peak with Mongolia’s Ministry of Health and Sports.

Without diving into philosophy, naming any geographical entity is not a privilege to be taken lightly. For the adventurous team of six, respect to the nation which hosted them was a vital component of the process – a name which not only reflected their time in Mongolia but also the country’s heritage.

“Zuchi was the name of Ghengis Khan’s first born son and the word means ‘guest’, a fitting name for an impressive mountain in a very welcoming land,” said expedition teammate Tina Papadopoulou, inspired by the insight she’d gained from the team’s Mongolian guide Altra. 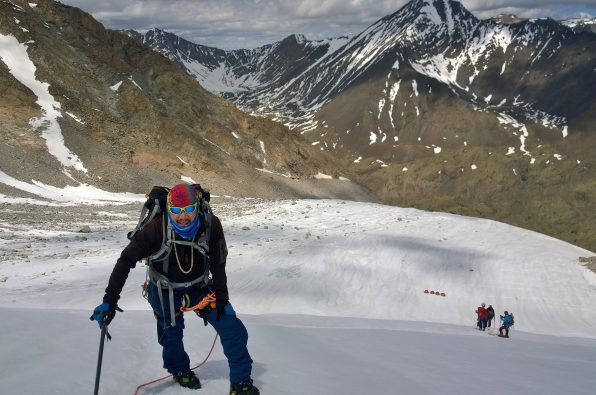 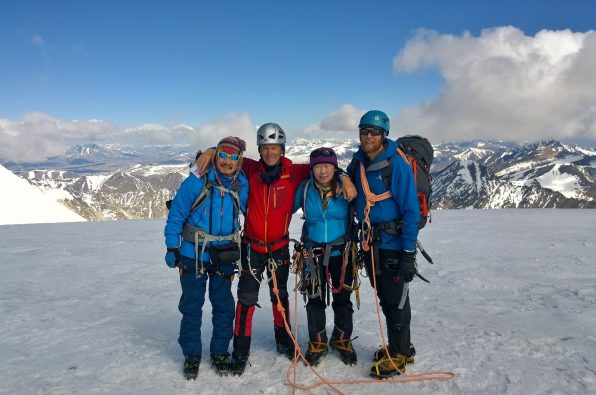 Following the spiritual beliefs attached to the mountains held by local communities, in 1994 the Bhutanese government prohibited mountaineering on all peaks over 6000m. This means there are literally hundreds of unclimbed, unnamed mountains in Bhutan all out of bounds to future expeditions, including the world’s highest and mountaineerings ultimate forbidden fruit: Gangkhar Puensum, at 7570m.

During the production of Levison Wood’s Walking the Himalayas series in 2015 – orchestrated by Secret Compass – a certain secluded valley, overlooked by Gangkhar Puensum and enclosed by a multitude of unclimbed peaks, provided the dramatic background to the series climax. Shot by our very own Operations Director Tom McShane, its rugged contours which line the valley have since taken pride of place on our office wall.

Early in 2017, Secret Compass led another television production team to the same region and in March, an adventurous team of explorers set out to reach the summit of one of its peaks sat at 5400m, believed at the time to be unclimbed. In autumn of 2018, we’ll be back.

Perched aside the same valley, our operations team have selected two unnamed and we believe unclimbed mountains, as potential objectives for our Hidden Himalayas expedition. 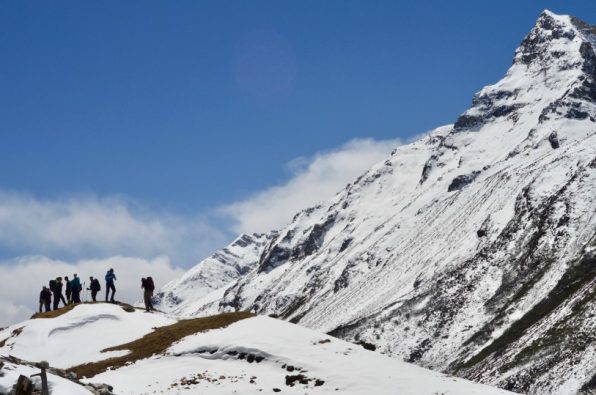 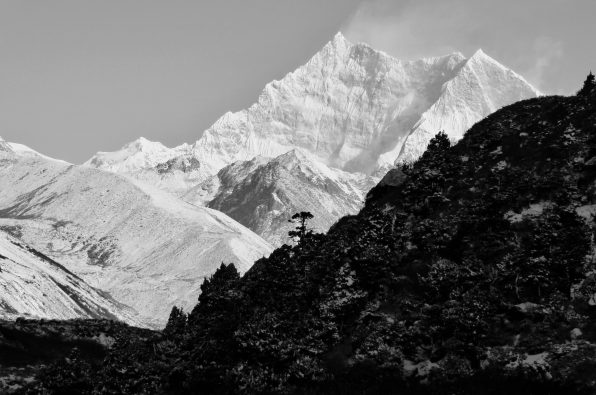 “Watching the sun creep up the imposing and ridiculously steep flanks of the snow covered forbidden peak is a sight to behold.”

Both peaks are accessible trekking peaks, which means no previous mountaineering experience is required. They’re tall enough to pose a formidable challenge, but not so much so that they reach the realms of being forbidden.

“The trek in offers a very gradual and safe acclimatisation,” he continues. “It’s a non-technical ascent, so no specialist kit is required. In autumn, the winter snow is yet to hit, which means ice-axes and crampons are also not required. As long as you’re fit and take it steady this should be achievable by most.”

So what is it about this particular valley and its surrounding peaks that keeps our operations team so completely absorbed? While there are plenty of secluded Himalayan valleys, few offer such a unique opportunity as this.

“With incredible mountains running down both sides, leading towards the most impressive views of Ghankar Puensum, it’s absolutely stunning,” says Tom. “Waking up in the morning before sunrise to watch the sun creep up the imposing and ridiculously steep flanks of the snow covered peak from your tent – with a warm cup of tea in hand – is a sight to behold!” 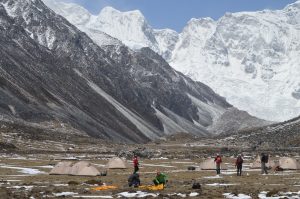 Intrigued by the prospect summiting an unnamed peak this year? Click here for full information on the Bhutan expedition. Fancy ticking off one of the seven summits instead? Take a look at our Kilimanjaro expedition here.