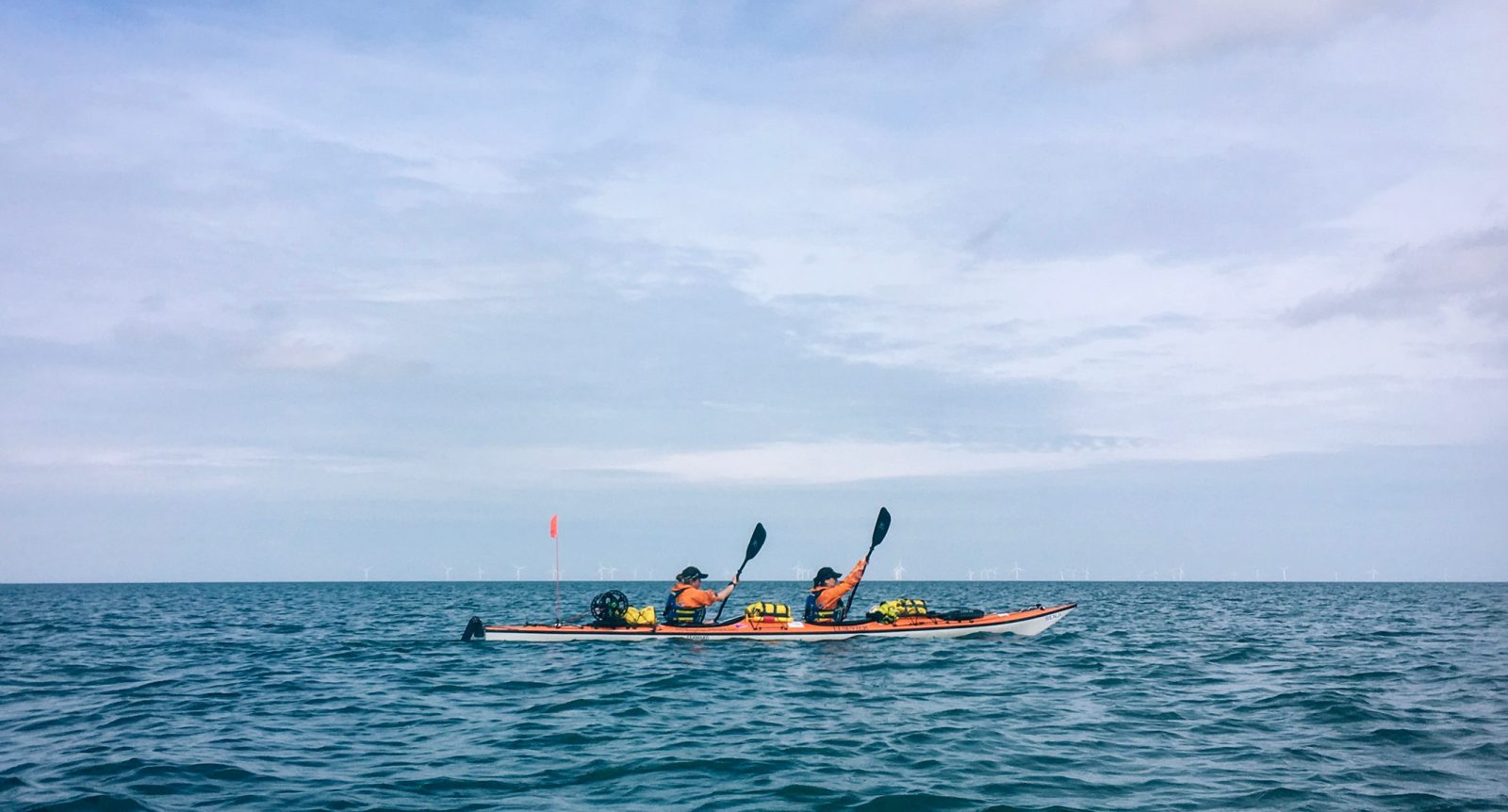 THESE GIRLS ARE KAYAKING ACROSS THE CONTINENT

from London to the Black Sea

Self-supported, human-powered journeys are where it’s at. There’s a lot to be said for covering ground under your own steam and when your line of travel makes a tangible mark on a global map, that’s when you know you’re doing it right.

On the 21st of April, having met just six months previously, 19-year-old Kate Culverwell and 24-year-old Anna Blackwell set off in a tandem kayak to paddle across the continent. From London, they’d head east to reach open water and cross the English channel before following the rivers and canals of mainland Europe to travel 4000km through 13 countries and four capital cities before hitting the Black Sea.

Having arrived in Strasbourg with France and over 150 locks behind them, I caught up with Anna to hear how they were getting on. 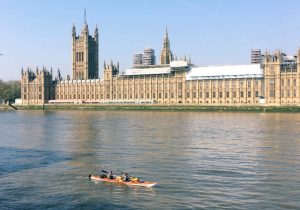 Hey Anna, so you’ve just made it to Strasbourg, how long are you there for and what are you up to?

We’ve just got two short days here. Just enough time to get on top of our blog and social media, sort logistics for the next section of our expedition and get some much needed laundry done… Oh the glamour. We’ll also take some time to explore the city and enjoy some R&R.

Obviously waterways aren’t always the most direct form of travel, how far have you paddled so far?

Somehow we’ve covered about 1,100km! It’s definitely not been a direct route as you can see from some of the impressive wiggles on our ZeroSixZero tracking map.

And how’s it been? How are the calluses and blisters coming along?

It’s been absolutely incredible! While there have been some challenges – we’ve had kit break and stolen and some terrifying storms, along with occasional bouts of illness – we’re managing to keep smiles on our faces and overall we’re having a huge amount of fun. We’re still waiting for our hands to fall apart, they’re looking in good shape with only a few callouses. 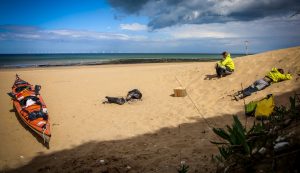 Tell us about the storms and dare I ask about the kit?

The storms were absolutely terrifying. On two occasions we’d set up camp for the night when we started to the distant rumble. We knew storms were on the way but hadn’t quite anticipated what it would be like to experience them from a tent in a field, the river a few metres away and the closest town several miles further. The second storm in particular was something neither of us ever want to go through again. The storm was in the very field we were camping in and the lightning struck so close you could feel and hear the electricity in the air. The simultaneous thunder clap was so deafening and immediate it made the ground and our bones shake. We were also terrified the river would flood and wash us away. There were a few close calls during the days as well, thankfully we had time to get off the water and shelter under a tree so we could wait it out in relative safety.

The kit failures were frustrating. For the first section of France and all of Belgium we had to portage around locks, meaning we had to get our 6.7m long heavily laden kayak out of the water, pop it on a small set of wheels, and walk it to the other side of the lock sometimes several kilometres away. After several particularly long walks like this while we were in Belgium, the plastic axel of the wheels wore down completely and snapped, rendering them totally useless. We had to wait for a few hours to be rescued by some new friends we’d made, who lent us a replacement set of wheels while we tried to order a replacement pair.

Unfortunately, the following night, due to our own carelessness, the borrowed wheels were stolen from where we were camping. Once again we were unable to portage, on a day when we had half a dozen locks to get into a city. We found a way around this though by hitch-hiking onto a shipping barge, stowing our kayak on the deck and enjoying a much more relaxing day than planned. We eventually got new wheels, but by that point we’d been granted permission to paddle through locks so they weren’t quite as essential anymore. 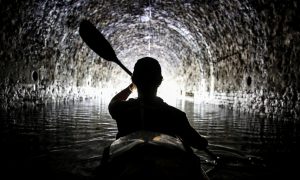 A tandem boat is a pretty intimate way to travel, particularly on the longer harder shifts on the river, how are you getting on in such close quarters?

We’re getting on fantastically well and are yet to have any sort of argument or even terse exchange. It was a fairly intense six months getting the expedition together in terms of funding, training and logistics and we’d only met for the first time in November. This brought us incredibly close and we trust each other implicitly as a result. That said, we both have our off days but we know to give the other a bit of space on those occasions.

What’s been the sleeping arrangements?

Most nights we are wild camping by the river or canal. For the first month we were sharing a tent as it was hard to find places that we deemed socially acceptable to pitch up two tents. It’s now less of a worry so we have a tent each, though spend most evenings together in the same one while we have dinner and watch Netflix on the iPad, only parting ways to sleep. We’re pretty inseparable. We’ve been able to camp next to a few locks or even in people’s gardens which has given us a bit of extra security when we’re closer to towns – not that we’ve felt particularly at risk so far.

Your kit must be pretty dialled in now you’ve been paddling for a while, how’s the setup?

Part of our preparation was honing our kit list so we came fully prepared without bringing excess, something I’m familiar with from previous expeditions. When we started it was quite a lot colder than it is now so we came armed with long-sleeved cags and waterproof trousers, but these have gone home as it’s warmed up significantly. Other than that, we managed to get our kit spot on. Our one really luxury item is an iPad which I brought for maintaining our blog and editing photographs along the way, but it has doubled up nicely as our evening entertainment. 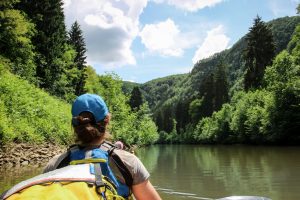 So now you’ve finished the France leg of the journey, over the next 3000km you’ll be entering lots of different cultures within a shorter period, is there anywhere you’re particularly excited to pass through?

I can’t wait to reach Budapest. This is somewhere I’ve wanted to visit for a few years now, though I never expected to arrive in a kayak. Kate is excited to reach the Danube and for the people we will continue to meet.

Now that we’re heading onto bigger rivers, we’ll be joining much larger barges and cruise ships on the water, something we’re really not looking forward to. We had a taster of this earlier on in the expedition as we were paddling on industrial canals alongside some slightly terrifying cargo barges. The wash they create can be almost as dicey as some of the coastal sections we faced paddling around Kent. 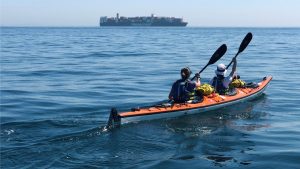 Are there any time constraints in place or are you happy to take as long as it takes?

Kate starts university in October, but this gives us plenty of time to enjoy the route without any pressure.

And you’ve been collecting water samples along the way for scientific research, can you tell us a little about that?

We’ve partnered with FreshWater Watch, a branch of the Earthwatch Institute, to contribute data to their ongoing research into the health of freshwater ecosystems around the world. We’re looking at the effect of urban areas. Our part is very straightforward, every 100km and before and after 16 cities along our route we take water samples. From these we can measure the phosphate and nitrate levels in the water, as well as the turbidity of the water (the cloudiness caused by sediment or algae in the water). There are a few visual measurements as well, such as the speed of flow and colour of the water and visible presence of pollution. All of this data is then uploaded into an app and the results can be seen on our FreshWater Watch page.

So you’ve still got a fair journey ahead of you, when do you expect to hit the Black Sea and what’s next once you’ve finished?

We’re currently due to reach the Black Sea in early September, though this may change if we have any more unexpected setbacks or we make better progress than expected. After that, Kate is off to Oxford University to study Music and I’ll be doing as much speaking and writing about this expedition as possible. Then I’ll be planning the next adventure as I’m sure Kate will be too.

Good luck to Anna and Kate for the remainder of their journey. You can stay up to date with the latest progress of the expedition through the Kayaking the Continent website.