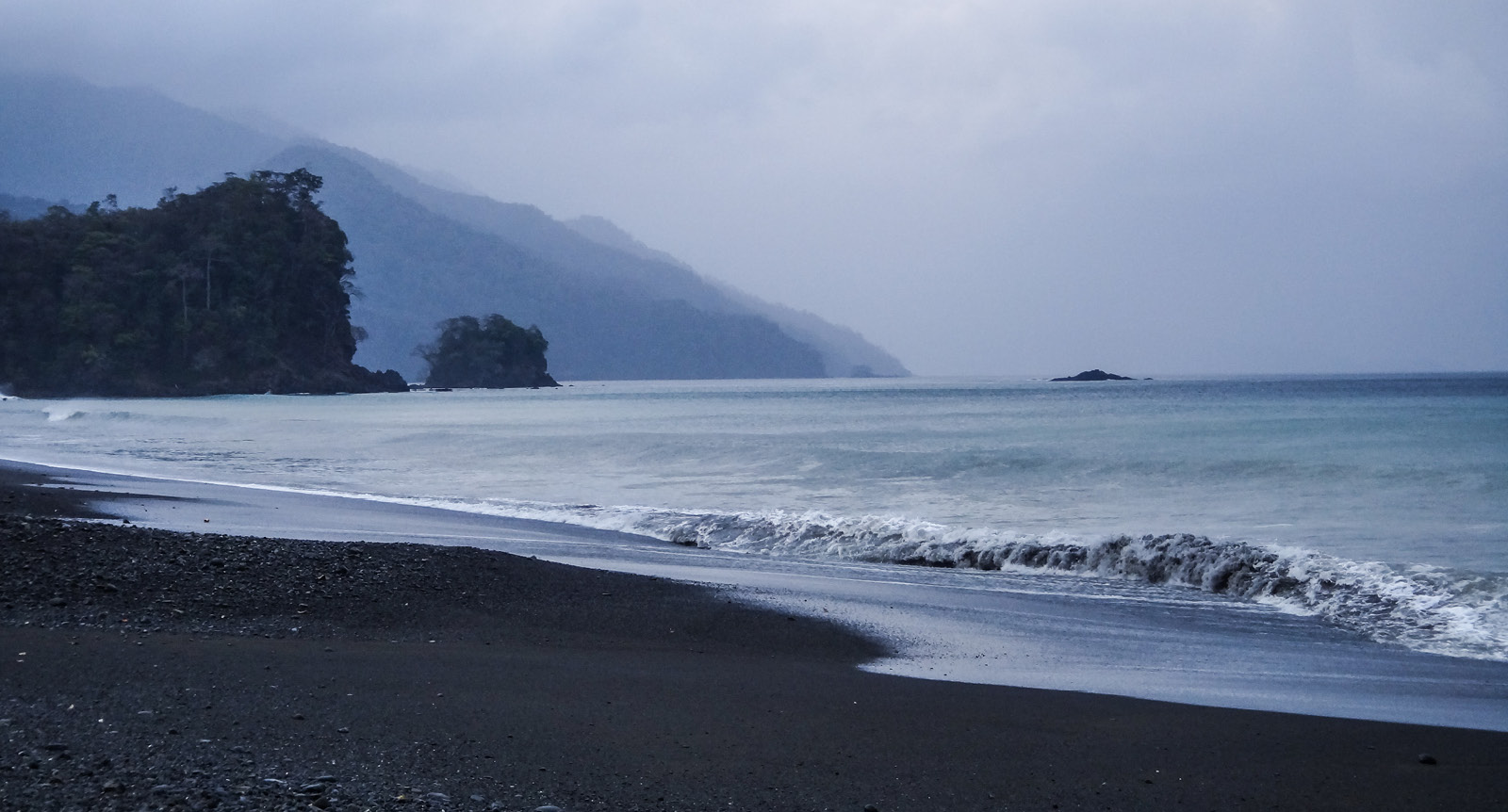 Rick Morales has been part of the Secret Compass leadership team for several years as our Panama, Darien Gap expedition guide and fauna, floral and route expert. RailRiders interview Rick on his solo trek through the world most challenging jungle. Article originally published in 2012 on railriders.com and is reposted here with their permission.

Panamanian Rick Morales has done what very few trekkers would even dare to attempt, let alone imagine: mapped out a new hiking trail across the length of his country. As a naturalist guide, he says that his ‘unconventional’ job took him to remote areas of Panama and other neighbouring regions such as the Darien Gap between Colombia and Panama, most of the Andean countries, the Galapagosand Pantanal.

When fundraising and volunteer efforts to create a TransPanama Foundation were stalled, he decided to make a solo attempt at hiking and mapping the entire route from border to border. 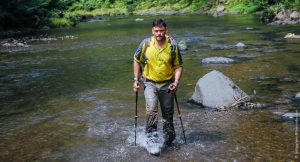 For 93 days, he walked 700 miles as well as going 48 miles in a canoe or makeshift raft. His journey began in 2011, in the treacherous Darien region of Panama, barely five kilometres short of the border with Colombia. “In the ensuing days and weeks,” says Morales, “I had great encounters with wildlife, admired the fantastic scenery of the country, and came across great people. Choosing the right gear was also a bit of a challenge. I fell in love with the RailRiders X-Treme Adventure Pants and Eco-Mesh shirt, and I was instantly hooked. In the heat and humidity of the tropics, the side-mesh panels work wonderfully. My outfit was later confiscated by the Association of Hiking Clubs of Panama, and is now being entered into the Panamanian Outdoors Hall of Fame. It will be its first exhibition piece along with the boots I wore!”

What inspired this journey?

Completing a long-distance trail the length of Panama has been my dream for decades. However, it all started to take shape when my friend Mike Esquivel brought together a group of volunteers whose job was to design and map such a route. I was captivated by the idea of one day being able to hike the whole thing. Over the years, the project ran into the usual problems of lack of funding and loss of momentum. So, last year having left a steady job, I decided to finish the mapping of the trail by hiking it from end to end, non-stop. The idea of becoming the first person to do this was obviously very appealing as well.

The first to hike the length of Panama

Panama is the narrowest point in the Americas. At its narrowest, it’s only 42 miles between the Atlantic and the Pacific. So, it would’ve been cheating to just hike across the isthmus and call it a through hike. Many people have done that since the Spanish colonial days. So there wasn’t really much of a challenge there. I was the first one to hike across its length. There are several trails alongside the Canal, but none that run the entire length of it.

The closest thing to that would be the Camino de Cruces and Camino Real, which were both historic trails built and used by the Spaniards between the 15th and 17th centuries to transfer the precious metals from Peru to the Caribbean and then eventually to Spain. Large sections of these trails are still in the rainforest, but many parts have now given way to modern roads and towns. Both of these trails are located inside the Canal watershed. 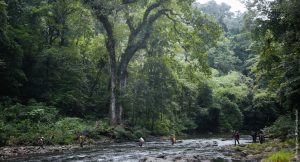 The most difficult part for me was the Atlantic coast, because I got sick with trench foot, my satellite phone got wet, and I was in one of the most remote areas of the country. I was out of communication for about three days. So it was a low point in my hike.

In terms of the terrain, the hardest sections were bush-whacking through the rainforests when there were no trails, but that was also the most rewarding aspect of the entire journey. There were several sections of lowland rainforest and higher altitude cloud forests where there were few or no trails, so I had to blaze my way through. But for the most part I followed existing paths made by local farmers and indigenous peoples. One section I clearly remember went entirely through a mixture of mud and cow dung. I chose the wet season for this hike, because I work in the dry season. I encountered many problems because of it. One problem I never had was the lack of water!

Did you encounter other hikers or locals?

No other hikers, and no surprise there, since I was barely mapping the first through-hike so that others in the future could come and hike the trail. I did encounter locals, of course. Panama is in the middle of the Americas and is a major world crossroads. Thus it’s a melting pot of peoples and cultures. I encountered three of the seven indigenous tribes of the country. I traversed one big indigenous reserve. I met people of European, African and Asian heritage, and we all call ourselves Panamanian. Perhaps the greatest difference I noticed between one region and the next, was the different materials and styles of their dwellings.

Rainforest people from the Darien build their huts on stilts, with a thatch roof and no walls, whereas the people from the central regions with hardly any access to construction materials build their homes with a mixture of clay and grass, with makeshift clay tiles. Indigenous groups from the foothills of the Talamanca Mountains, where there’s high wind and little forest cover, build their homes with a conical roof thatch, very close to the ground, with walls made of small round sticks and no windows. 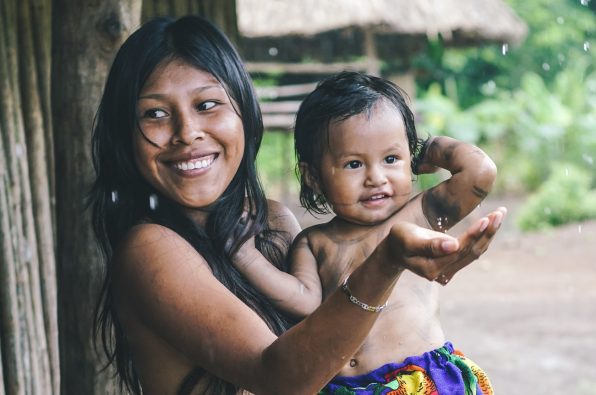 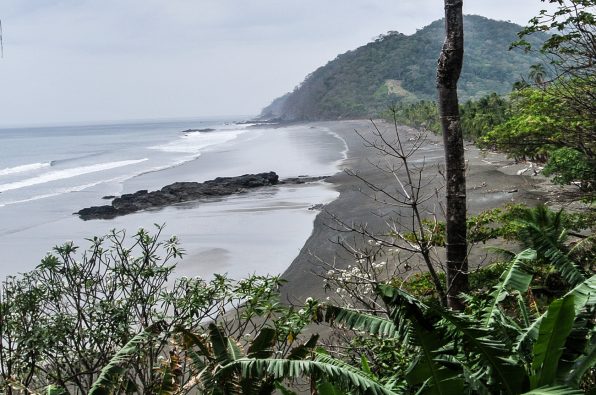 What did you do for food?

I bought food and supplies from villagers whenever possible, but for the most part my girlfriend would drive long distances to resupply me at different stages of the hike, since none of us really knew for sure what I was getting into. She took it upon herself to keep me well fed. I ate dehydrated homemade food and commercial freeze-dried goods, which I cooked myself on the trail with an ultra-light alcohol stove.

I was almost bitten once by a fer-de-lance viper. Luckily I saw it while it was coiling up to strike. Other than that, all of my encounters with wildlife were pleasant moments of the walk including other snakes. I saw five species of monkey, five species of macaw, two species of Quetzal, two kinds of peccaries, and tracks of jaguar, puma, ocelot and tapir. Never caught a glimpse of the jaguar, though one night in the rainforest I did hear and smelled something walking under my hammock, but I didn’t gather the will to poke my head out of the hammock to find out what it was!

I’m a naturalist guide and interpretive trainer. Essentially what that means is that I take people to wilderness areas and show them the local flora and fauna to instil respect and awareness for our natural heritage. 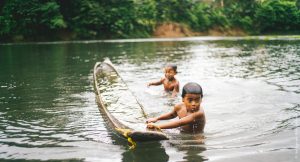 What do you think about Railriders clothing?

Gear was indeed a pivotal part of this enterprise. I did a lot of reading about thru-hikers in North America and such, but there was very little about the tropics. So that too, had to be done from scratch. I experimented with a different backpacks, cooking kits, water purification systems, and so forth.

But one thing I was sure of was the kind of clothing I would wear on the trek, and it goes without saying: RailRiders. The first time I came across RailRiders, was with a pair of Weatherpants, sent to me by one of my employers something like five or six years ago. I liked the black reinforcement panels on the seat and knees of the pants, and pretty soon they became the only pants I’d take to the jungle. Finally, after years and a ridiculous amount of abuse, I decided to retire those, more due to aesthetic reasons – various stains from food and rainforest saps – than due to structural failure. I would not accept anything less than RailRiders, so I went shopping again, for pants, shirts and underwear.”

Rick concludes, “I especially fell in love with my Eco-Mesh Shirt. I wore that shirt for about a year on every hike, and then disaster happened. One day I was having a peanut butter and guava jam sandwich in the middle of the jungle when a big smudge of jam landed on my belly. I quickly washed the stain, but it wouldn’t go away. When I got home I bought all the available products, and tried all the domestic remedies to get rid of the smear, but to no avail. I refused to give up, and ordered a nylon dying kit on the Internet. I chose the color green to blend in with my natural surroundings. But something went astray in the preparation; the shirt came out a grape purple/burgundy colour. I actually liked the new color, and decided that it would be my uniform on the TransPanama through-hike. I admit that I did get a back-up Eco-Mesh Shirt and another pair of Weatherpants, just in case, and two pair of RailRiders nylon boxer shorts. The clothes were all that I expected them to be and performed the way I’d come to expect from RailRiders. Thank you RailRiders for making products we wackos can rely on!”